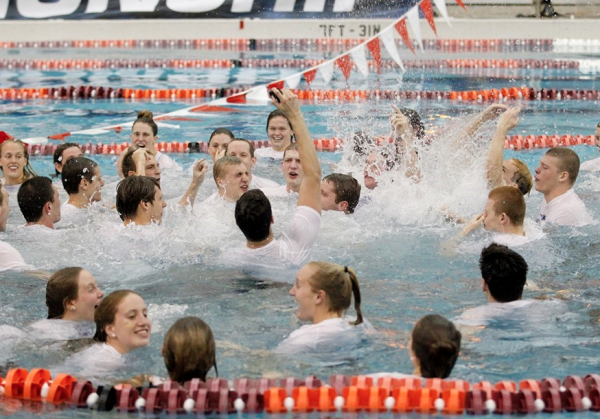 The men’s and women’s teams again made history at the Colonial Athletic Association Championships. The men won their third-straight title, while the women repeated for the first time in school history. On the men’s side, the Tribe took an early lead keyed by two relay wins and never looked back in dominating the field. The women, however, needed a tremendous final day to pull ahead of their competition.

Wednesday, the College men delivered a statement win in the 200-yard medley relay, where junior Wyatt Grubb, senior Alex Montes de Oca, junior Evan Baker and freshman Colin Wright dropped a time of 1:27.94. The team held onto a slim lead through three legs, and Wright dove in and delivered a 19.11 freestyle split, the fastest in school history.

In the 800-yard freestyle relay, the team of senior Alex Henderson, sophomore Eric Grimes, junior Tommy Kealy and senior Joe Eiden took home gold with a time of 6:32.35, which was the fifth-fastest clocking in conference history. With his team in second entering the final leg, Eiden came up clutch with a 1:36.34 split, the fastest in the field, to secure the win.

Thursday night, the Tribe took first and third in the 500-yard freestyle behind sophomore Carter Kale and freshman Ian Bidwell, with times of 4:24.73 and 4:26.70, respectively. Kale’s winning time was the fifth-fastest in program history. Freshman Ben Skopic finished second in the 200-yard individual medley, improving upon his own freshman record to finish in 1:47.02.

In the 50-yard freestyle, the College blew apart the field, taking the top four spots, led by Wright’s victory in 19.96. This was the fastest time in school history only behind Wright’s own performance from the prelims, where he swam a 19.62-second race. Freshman Jack Doherty, Kealy and Eiden finished second through fourth, respectively. These same top four teamed up to coast to a school, conference and championship record, winning the 200-yard freestyle relay in 1:19.03.

Friday, the Tribe qualified two for the NCAA championships as freshman Chris Balbo (3:49.46) and Skopic (3:50.90) finished first and second, respectively, in the 400-yard individual medley, posting the second and third fastest times in College history. Baker finished third in the 100-yard butterfly with a time of 48.51 to secure another medal for the Tribe.

Eiden, the hero of the 800 free relay, once again proved himself in the meet, dropping a 1:38.28 to repeat as champion in the 200-yard freestyle, posting the 12th-fastest time in school history. In the 100-yard breaststroke, senior Josh Zimmt also looked to repeat, but he fell just short with a second-place finish in 55.48. Henderson finished third in the 100-yard backstroke with the fourth-fastest time in school history at 48.87. In the 400-yard medley relay, Henderson, Zimmt, Baker and Eiden took third in 3:15.67, largely due to a freestyle leg from Eiden that was 0.6 seconds faster than anyone else in the field at 43.1.

Kale crowned himself king of the distance, following up on his 500 free win with a dominating performance in the 1650-yard freestyle, taking gold in a school record and NCAA-qualifying time of 15:20.04. Balbo also qualified for the NCAA championships with a second-place finish in 15:26.59.

In the 200-yard backstroke, Henderson took the bronze in 1:46.80. In the 100-yard freestyle, the Tribe men swept once again, with Wright, Eiden and junior Kyle Neri going 1-2-3. Wright set a new school record at 43.77 and qualified for the NCAA championships. Zimmt and Skopic took silver and bronze, respectively, in the 200-yard breaststroke. Kealy and senior Sean Higgins followed suit, taking second and third in the 200-yard butterfly.

Wright, Henderson, Neri and Eiden teamed to take home 400-yard freestyle relay gold in the final event of the meet, finishing in 2:57.55, the third-fastest time in school history. Eiden again came through in the clutch, diving into the water tied with Drexel and leaving with a relay win for the Tribe.

The men finished the meet with 953.5 points, over 200 more than Drexel, who finished second. Head coach Matt Crispino ’02 and his staff were honored as men’s coaches of the year for the fourth-straight season.

The women did not start as strong as the men but came on late to win their second-straight CAA title. Wednesday, the Tribe took third in the 200-yard medley relay with the third-fastest swim in school history, as the team of senior Sophie Rittenhouse, juniors Jess Crowley and Abby Mack and sophomore Annie Miller finished in 1:40.67. In the 800-yard freestyle relay, senior Selina Fuller, sophomore Maria Oceguera, sophomore Morgan Smith and senior Jamie Miller finished second in 7:18.61 behind an impressive 1:48.37 final split from Miller.

Thursday, Oceguera and Smith went 2-3 in the 500-yard freestyle with times of 4:52.14 and 4:54.89, respectively. The former was the eighth-best clocking in program history. Jaimie and Annie Miller, sisters hailing from Houston, Texas, made their mark in a big way in the 50-yard freestyle. Jaimie repeated as conference champion, dropping a 22.35 to record the second-fastest time ever for the Tribe. Annie brought home the silver with a time of 22.93. Next, the Miller sisters teamed with freshman Emma Herold and sophomore Katie Sell to win the 200-yard freestyle relay in dominating fashion, finishing in 1:30.95, setting a new school record.

In the 100-yard butterfly, Mack won silver in 54.18, qualifying for the NCAA Championships en route to the fifth-fastest time for the Tribe ever. In the 200-yard freestyle, Jaimie Miller continued her impressive performance, closing strong in the latter half of the race to win in 1:48.87, the third-fastest clocking in school history. Rittenhouse again delivered a strong performance in the 100-yard backstroke, finishing third in 54.14 with the third-fastest time in program history. The team of Rittenhouse, Crowley, Mack and Jaimie Miller finished third in the 400-yard medley relay with a time of 3:41.22, yet again the third-best for the College.

Saturday, Smith and Oceguera again finished 2-3, this time switching the order as they swam 16:46.07 and 16:50.53, respectively. The former was the fourth-fastest time in school history. In the 200-yard backstroke, Rittenhouse set a new school record with a clocking of 1:56.16 to finish second. In the 100-yard freestyle, Jaimie Miller once again took gold, winning in 49.21 to become just the second in conference history to win the 50-, 100- and 200-yard freestyle events.

With the 200-yard breaststroke, the Tribe finally pulled ahead of James Madison and took the lead they would not relinquish. Sophomore Claire Williams took silver in 2:15.64 with a new school record, and senior Allie Christy finished third in 2:16.91.

Mack won the 200-yard butterfly in 2:00.82 as Oceguera finished third in 2:01.86. Senior Georgie Crompton, sophomore Katie Sell and the Miller sisters won the 400-yard freestyle relay with the second-best clocking in school history at 3:21.22.

Overall, the women turned a 70-point deficit into nearly a 50-point win Saturday in order to defend the CAA title. Jaimie Miller finished with five gold medals to win the Swimmer of the Meet award. She has 11 career CAA golds, the second-most in school history.

Next, the Tribe will send swimmers who qualified to the NCAA Championships, starting March 15 in Indianapolis, Ind.