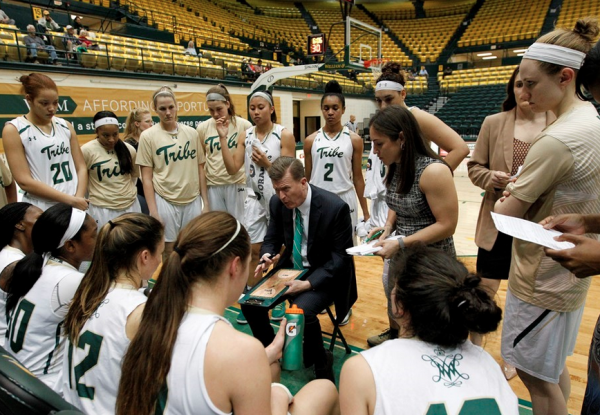 Thursday, William and Mary traveled to Harrisonburg in hopes of winning the Colonial Athletic Association tournament and claiming the automatic bid to the National Collegiate Athletic Association tournament. In the quarterfinal, the No. 4 seed Tribe met with the No. 5 seed Delaware (16-14, 10-8 CAA), powering past the Blue Hens 59-44. Friday, the College clashed with No. 1 seed Elon (27-6, 16-2 CAA), attempting to spring the upset in one of the two semifinals to advance to the championship. However, the Phoenix easily dispatched the Tribe (20-11, 9-9 CAA), capturing an 88-60 victory and ending the College’s season.

The Tribe took on Delaware in the quarterfinal, a team with whom it split its two meetings in the regular season. Taking a 12-3 lead early, the College appeared to be in control. However, the Blue Hens were able to close the gap to 15-10 by the end of the first quarter.

Halfway through the second quarter, the Blue Hens cut the College’s lead to one twice within a minute but were not able to overtake the Tribe. With 4 minutes and 17 seconds to go, the College led only 24-23. A 7-0 run helped the Tribe regain a comfortable lead. After a Delaware bucket, the Tribe led 31-25 at the half.

In the first half, senior guard Latrice Hunter led the way for the Tribe with nine points, while senior guard Marlena Tremba trailed with six. On the Delaware end, guard Erika Brown had eight points and forward Nicole Enabosi racked up seven.

The third quarter saw Delaware cut the Tribe lead, tightening the game. A 5-0 run concluding with two Brown free throws put the Blue Hens down one, but Tremba got a layup to go, extending the Tribe advantage to 40-37 at the end of the quarter.

The Tribe put together a strong fourth quarter to pull away and secure the victory. It outscored Delaware 19-7 in the quarter, resulting in a 59-44 win.

Tremba exploded in the second half, scoring 17 of her 23 points on the day to help the Tribe take control. Junior guard Jenna Green added 12 on the day. For Delaware, Brown finished with 15 and forward Makeda Nicholas had 10.

The Tribe matched up with Elon in the semifinal game of the CAA tournament, looking to get to the championship game for the first time in the modern CAA era. However, the game did not go as planned for the College.

Right out of the gate, Elon took a sizable lead over the Tribe. A 10-0 spurt about halfway through the first period put the Phoenix up 18-7. Elon guard Lauren Brown had six points during the stretch to help extend the margin. Elon held a 23-15 advantage at the end of the quarter.

The second quarter kept the Tribe in the game. The Phoenix gradually added to their lead early in the quarter, eventually going up 16 on a jumper from forward Meme Garner. The College chipped away at the lead, getting as close as eight with just over a minute left in the half, when Green got a layup to go in transition. Following two Elon free throws, the Tribe trailed 42-32 at halftime.

Quickly in the third quarter, the Phoenix built a much more comfortable lead. Following a jumper by senior forward Alex Masaquel for the Tribe, Elon went on a 10-1 run, going up 52-35 and forcing Tribe head coach Ed Swanson to call a timeout. Although it did stop the bleeding for the time being, the Tribe was not able to draw any closer to the Phoenix, who led 65-46 at the end of the third.

Elon ran away with the lead in the fourth quarter, despite the best efforts of Masaquel and Hunter. With 2:36 left in the Tribe season, Swanson took out his four seniors — Tremba, Masaquel, Hunter and forward Kasey Curtis — for the last time in their respective careers. The Phoenix won 88-60 to advance to the final of the CAA tournament.

The Tribe finished up the year with its most wins since the 2006-07 season, when the College won 20 games. It will lose its four seniors, including its two all-CAA second team honorees, Masaquel and Tremba. Green, a captain and starter, will return for her senior season.

Elon beat No. 2 seed James Madison in the CAA championship game and will head to the NCAA tournament. The Phoenix will find out their first-round matchup Monday night.