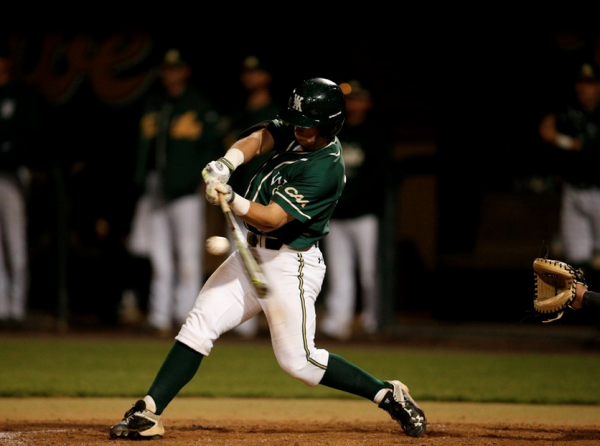 William and Mary baseball had a busy schedule over spring break, going 6-2 in eight games from March 3-12. The Tribe opened the break with three games in Cary, N.C., at the Irish Classic against Monmouth, Dayton and Rhode Island. It won all three games at this event.

March 3, the Tribe (4-4) took the field against Monmouth (1-6) at 2 p.m. for first pitch. The game was tightly contested throughout, but the College pulled off a 6-5 win.

Trailing 1-0 in the top of the fourth inning, the Tribe took its first lead with a three-run inning. Freshman left fielder Brandon Raquet singled, stole second, then scored on an error to tie the game. A two-run home run by sophomore shortstop Kyle Wrighte put the Tribe up 3-1.

The College held the lead for the rest of the game, despite the Hawks matching the two Tribe runs in the seventh inning and one in the eighth. Senior pitcher Nick Brown pitched for six innings.

The Tribe (5-4) returned to action March 4 against Dayton (3-5), notching its second straight win with a 7-0 shutout.

Junior second baseman Cullen Large gave the College an early 2-0 lead on a first inning home run that also scored Raquet, who led off the inning with a single to right field. The College added one more run in the inning to take a 3-0 lead to the second inning.

After scoring one run in each of the fourth, fifth and sixth innings, the Tribe capped off its scoring for the game in the seventh inning when senior center fielder Charles Ameer crushed a solo shot to left field stretching the William and Mary lead to 7-0.

The College (6-4) concluded its play at the Irish Classic against Rhode Island (5-6) March 5, finishing the weekend with its third straight win in a 2-1 comeback.

The Rams got on the board first in the pitcher’s duel, taking a 1-0 lead in the bottom of the sixth inning. Third baseman Matt O’Neil came through with the RBI single, his only hit of the game.

The Tribe responded in the top of the eighth inning, still down 1-0. Large had another big hit, a game-tying double that scored junior right fielder Ryan Hall and advanced senior designated hitter Ryder Miconi to third base. Miconi scored the eventual game-winning run on a one-out RBI single by sophomore catcher Hunter Smith.

The College held on for the 2-1 victory, with junior pitcher Charlie Fletcher picking up the win in relief.

After a day off, the Tribe returned to the diamond in College Park to take on Maryland. The College (6-5) came up just short in an offensive battle, losing 9-8 against the Terrapins. With the loss, the Tribe fell to 0-5 in away games for the season.

The Tribe came home for the rest of the break for four games at Plumeri Park. It played against Virginia Tech and Saint Joseph’s before finishing up with two against Yale. The Tribe went 3-1 in these games.

March 8, the College bounced back from the close loss to the Terrapins by trouncing Virginia Tech (9-6) by way of an offensive explosion. The Tribe (7-5) trailed early on but rallied for a 19-10 victory.

Down 2-0 early, the Tribe put up five runs in the bottom of the first inning. With the score tied 2-2 and men on base, Ameer doubled to center field, scoring Large and advancing Smith to third base. Both Smith and Ameer were brought home before the end of the inning, stretching the lead to 5-2.

The Tribe led by as many as five runs before Virginia Tech came back to take the lead again. Hokie designated hitter JD Mundy hammered a three-run home run in the top of the fifth to put the Hokies back up 9-8.

The Tribe put up five more runs in the bottom of the inning to take a 13-9 lead that the College would not relinquish for the remainder of the game. The five-run fifth inning was capped by a two-RBI double to left center by Smith, plating both Large and Hall.

The College opened the scoring in the bottom of the first when Large singled home Raquet to give the Tribe a 1-0 lead. The College went on to add another two runs in the inning, giving it an early 3-0 advantage over the Bulldogs.

Yale was trailing 4-0 going to the fourth inning. In the top of the fourth, the Bulldogs cut the Tribe’s lead in half with two solo home runs by third baseman Richard Slenker and designated hitter Griffin Dey. The College bounced back in the bottom of the inning with three runs of its own, with Large once again accounting for one of the RBI’s on a single to center field.

The Tribe pushed the lead to as many as eight runs before Yale got one back in the ninth. The College was able to close out and rebound from the previous night’s loss to St. Joseph’s with a 10-3 victory.

The College trailed early after giving up two runs in the first inning, but it seized a 3-2 lead in the bottom of the second on a two RBI single by Ryan, who was later brought home by senior third baseman Matthew Tilley’s single.

The Tribe held a 5-3 lead going into the ninth inning. Yale orchestrated a two-out rally in the ninth, loading the bases with two singles and a walk. The College retaliated when junior pitcher Robert White walked three straight batters with a run scoring on each walk. Yale took a 6-5 lead to the bottom of the ninth inning.

The College sparked a rally of its own in the bottom of the ninth. Hall led off with a single and advanced to second base on a sacrifice bunt by Raquet. Large stepped to the plate looking to continue his strong start at the plate this season. He smashed a walk-off two-run home run to right field, giving the Tribe a 7-6 comeback victory at home.

The Tribe looks to add to its two-game winning streak when its season continues this week with a midweek game March 14 against Norfolk State at Plumeri Park before hosting Rhode Island for a three-game weekend series from March 17-19.