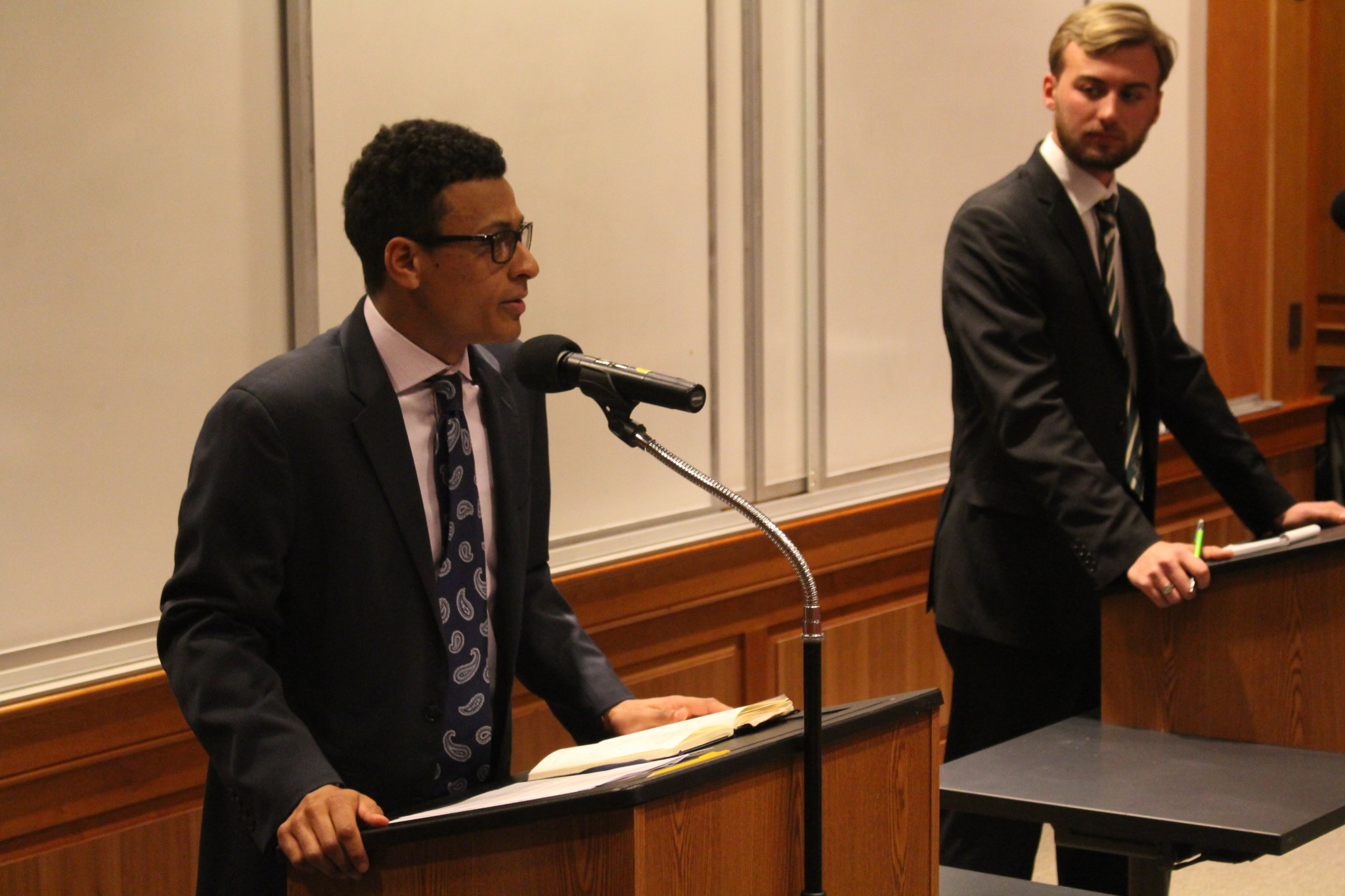 Monday, March 20, Student Assembly presidential contenders Elijah Levine ’18 and Chairman of the Senate Danny O’Dea ’18 took the stage to debate on the central tenants of their platform and share their reasons for entering this year’s presidential race.

Their running mates, Sen. Annelise Yackow ’18 and Nami Srikanth ’19, respectively, did not participate in the debates.

The event, which is hosted annually by SA, was moderated by the Roosevelt Institute, a campus organization that focuses on promoting student activism and political advocacy. O’Dea and Levine debated on topics central to their platforms including supporting new funding guidelines for multicultural student organizations, mental health and supporting students in the LGBTQ community.

In introducing himself, O’Dea cited his three years as a member of SA senate as one of his qualifications for the presidential position and said that through his experiences in other leadership roles, has felt that there are ways that SA needs to change to give more students access to share their opinions.

“When I stepped on campus, I loved William and Mary but knew there was more I could do,” O’Dea said. “I have been a three-year member of SA, have been re-elected by the class of 2018 three times. I was the single most active member of Student Assembly in my sophomore year in senate. This year, I became senate chair and have prioritized making a culture shift within the senate, making sure the senate and SA reached out to student organizations … I want to make sure every student who has a voice gets to have an active role to use that voice.”

Levine said that, in contrast with O’Dea’s involvement in the SA senate, he believes his separation from SA has given him the perspective that SA needs to make changes he believes are necessary. He cited Supporting Survivors, a sexual assault initiative, that he founded as part of a joint Interfraternity Council and Panhellenic Council program as his qualification for running.

“I am extremely proud of the work we have done in the platform,” Levine said. “Annelise and I have collaborated with so many students on campus. It is a platform that speaks to an earnest effort at reassessing our values, the foundation of our institutions, in an earnest effort that sees change that goes beyond the surface level. The lack of SA experience, that’s something Annelise saw in me as a running mate.”

Each candidate was then asked why they chose their running mate. O’Dea highlighted Srikanth’s involvement in mental health outreach work in student organizations like Active Minds and as the SA Undersecretary of Mental Health. He said that he believes that after he graduates she will continue to work on their initiatives whether as a member of SA or as a student. Levine said that he chose Yackow because when he told her first about his perspectives on SA based on his personal experiences, she saw a new way at looking at SA that inspired her to join his ticket. He also said that he respected her involvement for the last three years in the senate, particularly as someone who had worked on the senate finance committee.

Speaking to elements of each candidate’s platforms of reforming the College of William and Mary’s Executive Appropriations Committee, O’Dea and Levine each shared how they believed reforming the budgeting process could make the College a more welcoming place to multicultural student organizations.

“When it comes to making William and Mary a more welcoming campus, I believe the role of SA has is that of operating as an advocacy organization, but not just in words but in actions as well,” O’Dea said. “It’s making sure that the funding goes to the organizations that needs it. I have also worked on reforming the SA budget for multicultural organizations and have attended EAC meetings for three years. This change needs to happen by making sure these organizations know there their voices are valuable.”

Levine said that while he, too, would like to reform the senate’s activities and events funding process and the EAC budgeting process, he would like to question how the College’s population reflects on the perspectives of marginalized students.

“For too long, marginalized students at the College have had to navigate experiences of discomfort when at the same time there have been efforts to alleviate those tensions and treading not deep enough where conversations needed to be had,” Levine said. “It also speaks to our need to be vocal about the issues that are important to us as a community, for our platform specifically, this also means being a proponent of a refugee resettlement resolution and making steps towards acquiring sanctuary campus status, regardless, or maybe in spite of, the Board’s decision.”

During the section of the debate focused on audience-submitted questions, O’Dea and Levine were asked how they planned on improving mental health on campus. Levine said that he believed that at the center of his mission was looking at how the actions of SA “reflected on the culture of campus in general.”

“This involves bringing in more diverse set of perspectives and experiences, especially in things like diversity and mental health, where for instance, the EAC hearings or the activities and events hearing, have historically been an arena where a group has to sell their culture to receive funding,” Levine said. “Our platform is unique in that it addresses the cause of stressors. While stressors are diverse and implicate our experiences, we can all agree on the ubiquitous stressor of school, which is why we came up with the idea for a syllabus clause.”

Levine and Yackow have proposed requiring professors to include a clause in all syllabi that would tell students that mental health should be prioritized over academic assignments, similar to a current clause in most syllabi that promotes resources available through the College’s Department of Student Accessibility Services.

O’Dea said that he and Srikanth would like to promote mental health awareness as well as try to subsidize first-time appoints off campus for students seeking mental health help.

“This is a central part of our platform, something we are dedicated to changing,” O’Dea said. “We believe that the way our school currently looks at mental health is emblematic of the system structures that seek our help, whether it be how the counseling center is hidden away in the back of Blow [Memorial] Hall and not referenced until someone desperately needs it. We don’t address where it is or how to get there.”

Levine said that while he appreciated O’Dea’s platform on mental health, he believed that the proposed subsidization of co-pays for students seeking mental health treatment off-campus reflects socioeconomic privilege, because only students who could afford to go off-campus would be receiving those subsidies. O’Dea said that this part of his platform was specifically to address privilege, because by helping subsidize co-pays in whatever way possible, he and Srikanth would be furthering mental health access for more students.

O’Dea said that at the center of his platform is a look at the “intersectionality” of the College, and that he and Srikanth would advocate for all students regardless of gender identity or sexual orientation, to feel safe and welcome at the College. Levine said that part of his platform, a weekly social media outreach campaign known as the People’s Report, would help promote inclusion of LGBTQ populations on campus.

“I think this issue is necessarily a cultural one that speaks to what is at the center of our mission — breaking down traditional, taken-for-granted institutions and making room for new voices to be heard,” Levine said. “I think that this speaks to the main aspect of the People’s Report, that will bring up concerns, anxieties and celebrations.”