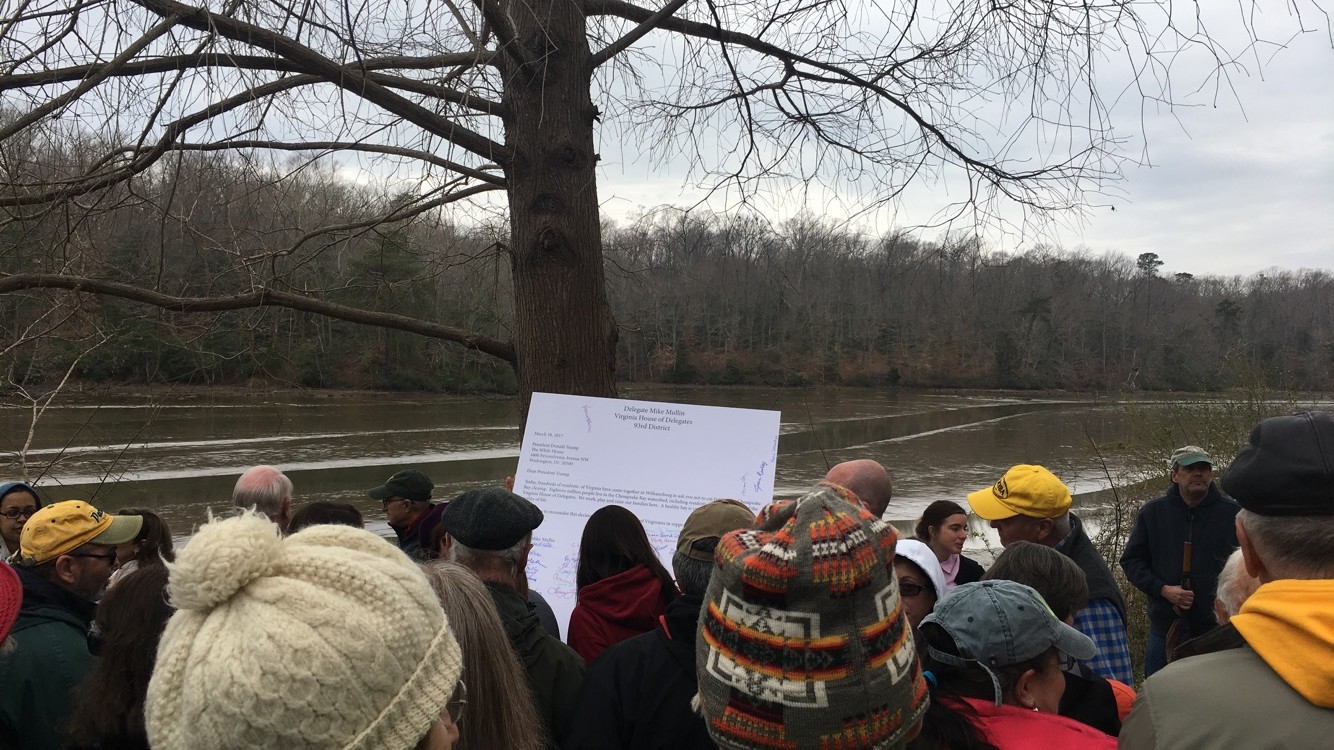 U.S. President Donald Trump submitted his budget proposal for 2018 Thursday, March 16. It proposed cutting the Environmental Protection Agency’s funding by 31 percent and eliminating the Chesapeake Bay Program. In response to this proposed budget cut, a “Rally to Save the Bay” was organized Saturday, March 18.

The budget plan outlines a dramatic increasing in defense spending, funneling an additional $54 billion into defense programs while slashing EPA funding and eliminating the entirety of the $73 million that previously funded the EPA’s Chesapeake Bay Program.

Delegate Mike Mullin (D-Newport News) hosted the Rally to Save the Bay along with Sen. Monty Mason and members of local and state governments and environmental organizations in order to protest Trump’s budget cuts. First Lady of the Commonwealth Dorothy McAuliffe and Virginia Lt. Gov. Ralph Northam’s wife Pam Northam were also in attendance.

Mullin said that progress had been made to clean up the bay, but there is still a long way to go. He also emphasized the importance of the bay to the local economy.

“Does the president remember how polluted the Chesapeake Bay was only a generation ago?” Mullin said. “I know no one here forgets that. The president talks about how he’s a world-renowned businessman. Does he remember the local industries that rely on tourism, on fisheries and on shipping — all the things that need a clean bay to support the thousands of jobs that are all here in Virginia?”

The Chesapeake Bay Program is a regional partnership that brings the federal government together with state and local governments, non-governmental organizations and academic institutions. The program monitors and models the bay and has a wide variety of programs aimed at cleaning it up and fostering its ecosystems.

With tributaries, rivers and streams touching almost all of Eastern Virginia and stretching all the way up to parts of Pennsylvania, the Chesapeake Bay is vital to coastal economies.

“In the year 2013 to 14, bay oysters’ dock-side value was $44 billion. With $28 billion of it coming from Virginia” Mason said. “So, we know that whether it’s the working watermen, whether it’s the recreational fisherman or tourism, the bay generates about $22 billion of economic activity a year. So, this is not just an environmental play. This is critically important. This is a play for the future of the Virginia economy.”

The bay not only represents an important source of jobs for people living in the watershed, but it is also a leading source of tourism in Virginia and is an important location for many Virginia residents.

Executive Director of the Virginia Conservation Network Mary Rafferty spoke about the connection Virginia residents have with the watershed and the importance of preserving it.

“Everybody in Virginia probably has a story, whether it’s going kayaking on the Potomac, jumping off the rocks on the James River, eating oysters from the Rappahannock,” Rafferty said. “That’s why cleaning up and restoring and protecting the Chesapeake Bay is such a Virginia value because everybody has a connection with it, and that’s why President Trump’s budget is completely out of step with the Virginia values.”

In response to the budget cuts, two separate letters have been signed showing discontent over the elimination of federal funding for the bay. One letter has been signed by every Democratic senator in the Chesapeake Bay watershed except for one. The senators from Pennsylvania also did not sign.

Mullin expressed the importance of the federal government in intervening in state issues. He explained that because Pennsylvania is not directly affected by the pollution of the Watershed, they have no incentive to sign the letters of discontent.

“That’s why this is so important. Federal regulatory efforts and federal oversight is not a bad thing. This must be done comprehensively,” Mason said. “Pennsylvania has just a drain today, no bay fronting. But the bulk of the agricultural runoff in the Chesapeake Bay comes from Pennsylvania … That’s why it must be done at the federal level.”

The second letter was sent from the House of Representatives asking President Trump to restore full funding to the bay. Every Democratic representative from the Chesapeake Bay area signed the letter as well as three Republican representatives.

“This is a bipartisan issue,” Mullin said. “This is not something that Republicans or Democrats have to disagree about. Our voices have to be loud and clear that we’re standing here to protect our Chesapeake Bay, to protect its funding and to know that we can and will preserve this wonderful water space.”

The EPA is facing a 31 percent decrease in federal funding, and the Trump administration intends to eliminate one in five of its employees. The budget proposal increases federal spending in only three areas — veterans affairs, homeland security and defense. However, before the cuts, the EPA’s budget represented less than one percent of the overall federal budget.

The rally ended with attendees signing a letter written by Mullin to President Trump asking him not to cut funding to the bay and urging him to continue restorative efforts. Near the conclusion, Sierra Club Conservation Program Manager for Norfolk Zach Jarjoura encouraged attendees to continue their efforts to protect the bay.

“We’re going to have lots of challenges over the next few months, the next several years, but we can’t give up,” Jarjoura said. “We cannot stop fighting. We’ve got to get involved, we’ve got to get organized and we more importantly have to stay that way. We’ve got to stay engaged; this has to be for the long term. We’ve still got to keep providing for our morals, our values and our ideals.”