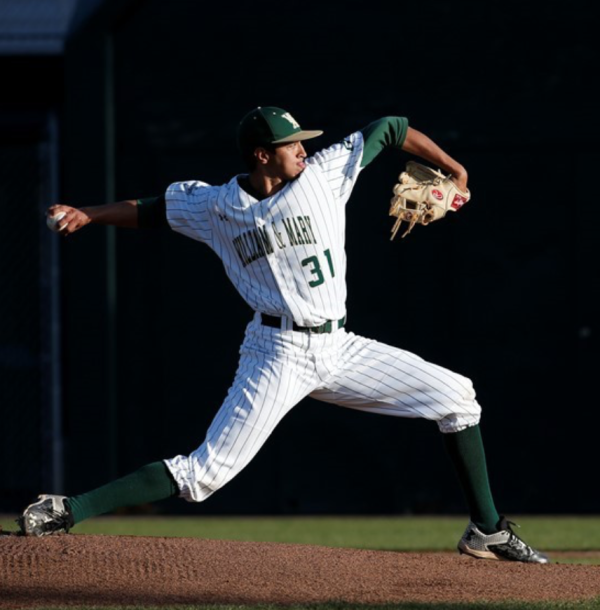 This past week, William and Mary played two mid-week games against Norfolk State and Old Dominion, going 1-1. March 28, the College played the Spartans at home and, despite falling behind early, found its offense down the stretch to claim a 6-1 victory. The following day, the Tribe remained at Plumeri Park for another in-state showdown, this time with the Monarchs of Old Dominion. The College took an early lead, but inconsistency on the mound was the ultimate downfall for the Tribe, as they dropped the contest 11-6.

The Tribe (14-10) took the field against the Spartans (9-13) March 28. The College was looking to build upon the momentum of its first conference and road win of the year against UNC-Wilmington two days prior. Pitcher Brian Beard took the mound for the Spartans, looking to pick up his first win of the season, while the Tribe sent senior pitcher Daniel Powers out for the start.

Powers got off to a shaky start for the Tribe, giving up an early run in the top of the first. This allowed the Spartans to jump out to a quick 1-0 lead. He walked the Spartans’ leadoff hitter, second baseman Alex Mauricio. After center fielder Andre’ Moore reached on a fielder’s choice, the Spartans got back to back base hits from Beard and third baseman Justin Burrell. First, Beard singled up the middle, allowing Moore to reach third base on the play. Burrell came to the plate with an RBI opportunity and delivered with a single up the middle, scoring Moore on the play to give the Spartans the early advantage. Powers promptly retired the next two batters to prevent the Spartans from adding to its lead.

The Tribe was unable to immediately answer the Spartans’ early tally. In the first inning, the College stranded a runner at third base and then went down in order in the second inning. However, the Tribe evened the score in the bottom of the third inning at 1-1. Senior first baseman Matthew Tilley started the inning with a double to left field. Freshman catcher Matthew Trehub grounded out to the first baseman, but Tilley advanced to third base on the play with only one out. Junior right fielder Ryan Hall, the leadoff hitter for the Tribe, flied out to center field, but Tilley was able to dash home and score, giving Hall credit for a sacrifice fly and a game-tying RBI.

The College scored in the bottom of the fifth inning to take its first lead of the game, which it would not relinquish. Sophomore shortstop Kyle Wrighte led off the inning with a ground ball to third base, but there was an error on the throw to first, allowing Wrighte to reach base safely. Freshman left fielder Brandon Raquet attempted to lay down a sacrifice bunt to allow Wrighte to advance to second, but Raquet was able to reach base on another error by the Spartans. Wrighte moved all the way to third base on the play. The next batter for the College was Tilley who picked up his second double in as many at-bats, scoring Wrighte on the play. The Tribe threatened to score more in the fifth inning but were unable to scratch across more than that one run, leaving the score at 2-1.

“I was looking for my pitch early, and I attacked fastballs early in the count when I got them and that way I was able to drive the ball opposite field,” Tilley said.

With the score still close at 2-1 in the bottom of the seventh inning, the College blew the game open with a big inning at the plate. The inning was once again aided by a Norfolk State error, when Raquet reached base on a one-out error. Raquet stole second base during Tilley’s at-bat, but Tilley ended up striking out. Then, the Tribe sparked a two-out rally. Trehub pushed the lead to 3-1 with an RBI single to center field, scoring Raquet on the play. Hall followed up Trehub’s single with a double down the left field line, moving Trehub to third base.

“I was pretty focused. It always helps having an off day and being able to come back to the field refreshed,” Hall said.

The Spartans made a pitching change after Hall’s double, moving Beard to designated hitter and bringing lefty Tyler Morgan out of the bullpen to pitch. Morgan threw a wild pitch to the first batter he faced, allowing Trehub to score and Hall to advance to third. After third baseman Ryder Miconi walked, the Spartans committed yet another error, allowing two runs to score and pushing the lead to 6-1. Pitcher Jack Howell entered the game for the Spartans and recorded the final out of the inning, stopping the bleeding and keeping the score at 6-1. In the last two innings, no more runs were scored, and the Tribe coasted to a 6-1 victory. Powers picked up the win for the Tribe, pushing his record to 2-2 on the season, while Beard was saddled with the loss for the Spartans and remained winless at 0-2 for the year.

“Whenever people give you chances, you try to make them pay,” head coach Brian Murphy said. “Capitalizing on other teams’ mistakes is part of the game.”

The College (14-11) returned to play March 29 against Old Dominion (20-5), looking to extend its winning streak to three games. The starting pitcher for the Monarchs was Jake Josephs, while the Tribe sent senior Aaron Fernandez out to the mound.

The Tribe got on the board first with a run in the bottom of the first inning. Hall continued his hot hitting with a leadoff double down the left field line. Miconi came up next with an RBI opportunity. He hit a hard ground ball up the middle that just hopped past the outstretched glove of the Monarchs’ second baseman Jared Young. Hall scored easily on the play, with Miconi getting the credit for the RBI. The Tribe went quietly after the early run, with junior second baseman Cullen Large grounding into a double play and sophomore catcher Hunter Smith popping out to the first baseman.

The College added to its lead in the next inning. Once again, the Tribe led off with a double down the left field line, this time off the bat of senior center fielder Charles Ameer. Wrighte, the next batter, laid down a successful sacrifice bunt to the third baseman, allowing Ameer to scamper over to third base on the play. Tilley then provided another productive out with an RBI groundout to the second baseman. The College collected two more hits in the inning from sophomore right fielder Owen Socher and sophomore third baseman Zach Pearson but was unable to add to its 2-0 edge.

Capitalizing on other teams’ mistakes is part of the game.”

The Monarchs fought back in the top of the third, to surge ahead 5-2. With one out, Fernandez started to struggle with his control. He issued back-to-back walks to right fielder Turner Bishop and catcher Devon Adams. Then, leadoff batter third baseman Nick Walker ripped a double down the left field line, scoring Bishop on the play and advancing Adams to third. Next, ODU first baseman Vinnie Pasquantino walked to load the bases. After Fernandez recorded the second out of the inning, the Monarch center fielder Culver Lamb blasted a grand slam to left field to give the Monarchs its first lead of the game, 5-2.

In the bottom of the third, the Tribe responded to cut the gap to one run. Large started the rally with a one-out single up the middle. Smith then crushed a double to left center field, advancing Large to third base on the hit. Ameer picked up an RBI with a groundout to second base, moving Smith to third base and scoring Large. Wrighte then hit an RBI single to cut the lead to 5-4, as Smith scored on the play. However, the College was unable to even the game because Tilley flew out to center field to end the inning.

After the Monarchs tacked on another run in the top of the fourth to stretch the lead to 6-4, the bats of both teams fell silent until the seventh inning, as the relief pitchers, senior Chase Bailey for the College and Morgan Maguire for the Monarchs, dominated on the mound. Walker demolished a ball over the left field fence for a long solo home run to push the Monarchs’ lead to 7-4. Walker’s home run was the only hit of the inning for the Monarchs. In the bottom of the seventh, the Tribe cut the lead to one run once again. Hall led off the inning and reached on an error. After Miconi flew out to left field, Hall advanced to second on a throwing error. Next, Large walked and Smith got hit by a pitch to load the bases with one out for the College. Ameer reached on yet another error by the Monarchs, allowing Hall and Large to score to cut the deficit to 7-6. The Tribe stranded both Smith and Ameer on base, as the last two batters of the inning were retired.

The Monarchs stretched the lead back to three runs in the top of the eighth and added two more in the ninth, taking an 11-6 advantage over the College. The Tribe went quietly in both the eighth and ninth innings and fell to the Monarchs, 11-6.

“We just have to get back to work and command the ball better,” Murphy said about the necessity of better outings on the mound to win more games.

Over the weekend, the Tribe took on Delaware for a three-game series in Newark, Del. This week, the College will travel to Richmond for a game April 4 against Virginia Commonwealth before returning to Plumeri Park for a weekend series against Elon, April 7-9.

“We’ll be ready to go,” Murphy said about the upcoming weekend series with Delaware. “We just need to play a complete game and be ready to go in all phases.”