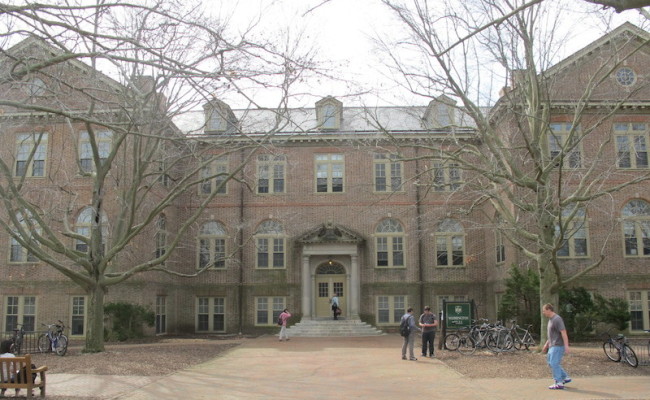 The College Libertarians and NAACP hosted the third and final lecture in their Incarceration Nation series Wednesday, March 29.

The Incarceration Nation speaker series brought together clubs with different ideologies. Previous speakers challenged typical conservative beliefs regarding the death penalty and took a dive into issues such as the American drug market.

The lecture series was hosted because of the unlikely partnership between the College Libertarians and NAACP. NAACP member TyDazia Talley ’17 said she was intrigued by the chance to partner with a club that represented a political party she knew little about.

“I was really interested because I don’t know a lot about the Libertarian Party so any time I can get involved in knowing more about politics, period, that’s really great for me,” Talley said. “I know people on my exec board were really skeptical … so we had to do a lot of research and see what their platform was and it was just a good opportunity to learn more.”

Government professor Jackson Sasser talked to attendees at the final lecture about duty to disclose laws in Virginia. Under the Virginia disclosure of criminal records law, certain records such as complaint, court orders, witness statements and evidence relating to a criminal investigation or prosecution are not required to be shared with other parties.

“Virginia has the narrowest due to disclose and discovery in criminal contests,” Sasser said. “So, discovery of course is the process by which parties share information before — share information in the spirit of building a case — before the case is begun.”

Sasser compared the actions of the defense attorneys and public defenders to those of the chefs on the Food Network show “Chopped,” saying often their only options are to improvise with what little information they are provided.

“[It’s] improvisation and that’s what Virginia criminal defense attorneys do to some degree because they do not have access to [information],” Sasser said. “If you’re facing a felony in the Virginia Circuit Court, the prosecutors are under no obligation to share with you … the statements made by other witnesses, any reports, forensic ballistic or otherwise, a list of witnesses. There’s no obligation for prosecutors to share this information.”

In 2014, Virginia organized a special committee on criminal discovery rules. This committee spent a year formulating a list of recommendations for changing the current limitations. These included allowing the defense to access police reports and witness interviews, requiring both parties to release witness lists before trial and providing advance notice of expert witnesses.

Sasser said these recommendations took a year to develop, but they were never adopted.

“The Supreme Court of Virginia’s rules govern the work of circuit and district courts across the state,” Sasser said. “They spent a year working on these issues, met six times and submitted these changes … The Supreme Court issued a 56-word order that basically said, ‘no thanks, we’re good’.”

Michael Irr ’18 asked Sasser why the criminal justice system has rules in place like those of disclosure and discovery if they lead to injustice.

“It seems to me that there’s a problem with the evaluation system of the prosecution,” Irr said. “I’m a business major … and earlier in the semester we talked a lot about managers having issues with employee performance … because they weren’t rewarding accurately the things that they wanted the jobs to represent and if the purpose of the justice system is to find justice, but a popular evaluation for a prosecutor is their conviction rate, that seems like a disconnect between what you’re trying to find and what you’re rewarding. It just seems like there needs to be a rebalance.”

Sasser, however, didn’t have a reason for why the system is set up with these limitations.

“Prosecutors work in an area essentially free of accountability,” Sasser said. “So, you’re really on to something. There’s not a clear reason here.”

“In my policy, quantitative methods class we were talking about conviction rates and my professor was totally cool with a five percent false positive rate and I was wondering from what you know of the resources in the criminal justice system, what a sensible false positive is,” Estes said.

Sasser answered Estes by saying that there isn’t a reasonable false positive and we should do everything we can to get the rate to zero.

“My simplest answer is the best that we can do or manage,” Sasser said. “Whatever that tends to be … It’s hard to say anything over zero is acceptable, right? Because these are folk’s lives.”