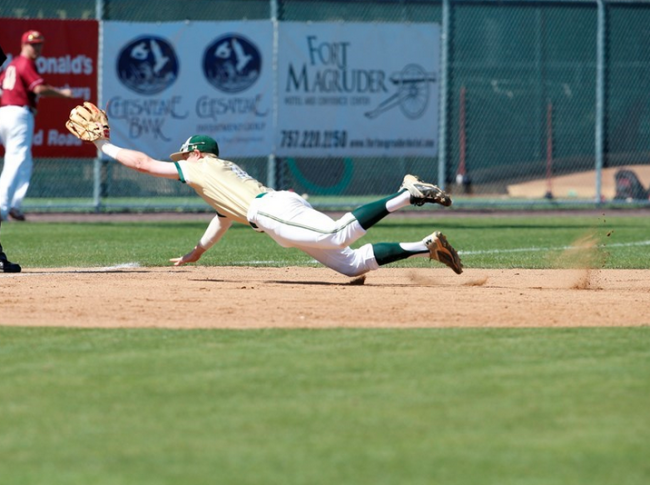 Last weekend, the Tribe took on James Madison at Plumeri Park for a three-game Colonial Athletic Association series. The College was looking to bounce back from its shutout loss to Maryland on Wednesday and advance its 4-5 record in conference play. The Tribe swept the Dukes by way of strong offensive performances, comeback wins and two walk-off victories.

“We were just trying to get back to playing better,” head coach Brian Murphy said.

Friday, the College (22-20, 7-5 CAA) utilized an offensive explosion to fend off the Dukes for a 14-8 victory. The Tribe got off to a fast start to take an early lead on the Dukes (18-20, 3-12 CAA). Junior right fielder Ryan Hall came to the plate with one out and one man on in the bottom of the first. He launched a pitch to right-center field that hopped over the fence for a ground-rule double to give the Tribe a 1-0 advantage. With two outs, two consecutive batters were hit-by-pitch for the College, loading the bases for sophomore shortstop Kyle Wrighte. Wrighte stroked a single into right field, leading to two runs scoring on the play. The Tribe headed to the second inning with a quick 3-0 lead.

“I was trying to get a pitch to hit, put a good swing on it, and just hit the ball hard,” Hall said.

The Tribe and the Dukes each scored two runs in the third inning. After the Dukes closed the gap to one run at 3-2, the College quickly responded in the bottom half of the inning. Senior designated hitter Ryder Miconi led off the inning with a double to left-center field. Up next to bat was sophomore catcher Hunter Smith, who blasted a two-run home run to center to push the Tribe’s lead back to three runs at 5-2.

The Tribe maintained its three-run lead until the top of the fifth inning when James Madison put up six runs to take an 8-5 lead. The Dukes used six hits to spark the big inning.

I was trying to get a pitch to hit, put a good swing on it, and just hit the ball hard,” Hall said.

The College responded in the bottom of the sixth to retake the lead. After two walks and a hit-by-pitch to start the inning, Hall hit a fly ball to left field for a sacrifice fly with a run scoring on the play to cut the deficit to two runs. After a Miconi RBI single made the score 8-7, Smith hit an RBI single to right field to tie the game at 8-8. Junior second baseman Cullen Large crossed the plate for the game-tying run. Senior center fielder Charles Ameer added another RBI single to put the Tribe up 9-8. The College would not relinquish this lead the rest of the game. It was able to add another run in the bottom of the sixth before scoring two runs in both the seventh and eighth inning en route to a 14-8 comeback victory.

Saturday, the Tribe required extra innings to knock off the Dukes 8-7 in ten innings. This was supposed to be game one of a doubleheader, but the second game was postponed until Sunday morning due to rain. The Dukes got on the board first, scoring a run in the top of the second off a sacrifice fly to center field. The Tribe answered with a sacrifice fly of its own in the bottom of the third inning, off Hall’s bat.

The Dukes retook the lead in the top of the fifth inning with a three-run inning to take a 4-1 lead. In the bottom half of the inning, the College responded immediately with three runs of its own to even the score at 4-4. Hall and Miconi each had RBI singles. The College was aided by a Dukes error that extended the inning and allowed another run to score.

After the Dukes had once again taken the lead, the Tribe took its first lead of the day in the bottom of the seventh. Hall blasted a two-run home run to right field, scoring both he and Large on the play, and giving the College a 6-5 advantage. However, the Dukes fought back with a home run of their own in the top of the ninth. Junior third baseman Bradley McKay ripped a two-run home run to left field to put the Dukes up 7-6 going to the bottom of the ninth.

Three outs away from losing, the College came up with a game-tying rally in the bottom of the ninth to send the game to extra innings. Miconi doubled to lead off the inning, but the next two batters were retired. Wrighte came to the plate with Miconi on second base and two outs. Wrighte laced a single back up the middle for the game-tying RBI and to force extra innings, with the score 7-7. After giving up no runs in the top of the tenth, the Tribe was able to score the game-winning run in the bottom of the inning. With the bases loaded and one man out, Miconi came up with a walk-off single up the middle with freshman left fielder Brandon Raquet crossing the plate for the game-winning run.

“I was just trying to see something up in the zone and get a good swing off and fortunately it got through and we were able to win the game,” Miconi said.

Sunday, the Tribe returned to the field looking to sweep the Dukes. The College once again found itself down late in the game, but completed its third straight comeback to snag a 7-6 win over the Dukes. The series finale was another back-and-forth battle. After the College grabbed a 2-1 lead after three innings, the Dukes were able to surge ahead with three runs in the top of the fourth. The two teams traded runs in the fifth inning, leaving the Dukes with a 5-3 advantage.

I was just trying to see something up in the zone and get a good swing off,” Miconi said.

In the bottom of the seventh, the College took advantage of a couple wild pitches by the Dukes’ pitching staff. The Tribe was able to even the game with both runs scoring on wild pitches. However, the Dukes got back on top in the top of the ninth inning. Junior catcher Zach Tondi came up with a one-out RBI single to put the Dukes in position to secure the victory. The College fought back in the bottom of the ninth. Large scored the game-tying run with one out on an error off of a Smith ground ball. With the score tied 6-6 and two outs in the inning, freshman first baseman Patrick Ryan laced a walk-off RBI single into left field, scoring Miconi on the play for the game-winning run.

The College will look to continue the momentum of a strong week and a series sweep when it travels to George Mason for a mid-week in-state matchup. The Tribe will then travel to Towson for a conference showdown in a three-game series from Friday to Sunday.

“I’d like to see our starters get back on track, hopefully our bullpen can continue to pitch well, and we can have the type of at-bats we had this week,” Murphy said.