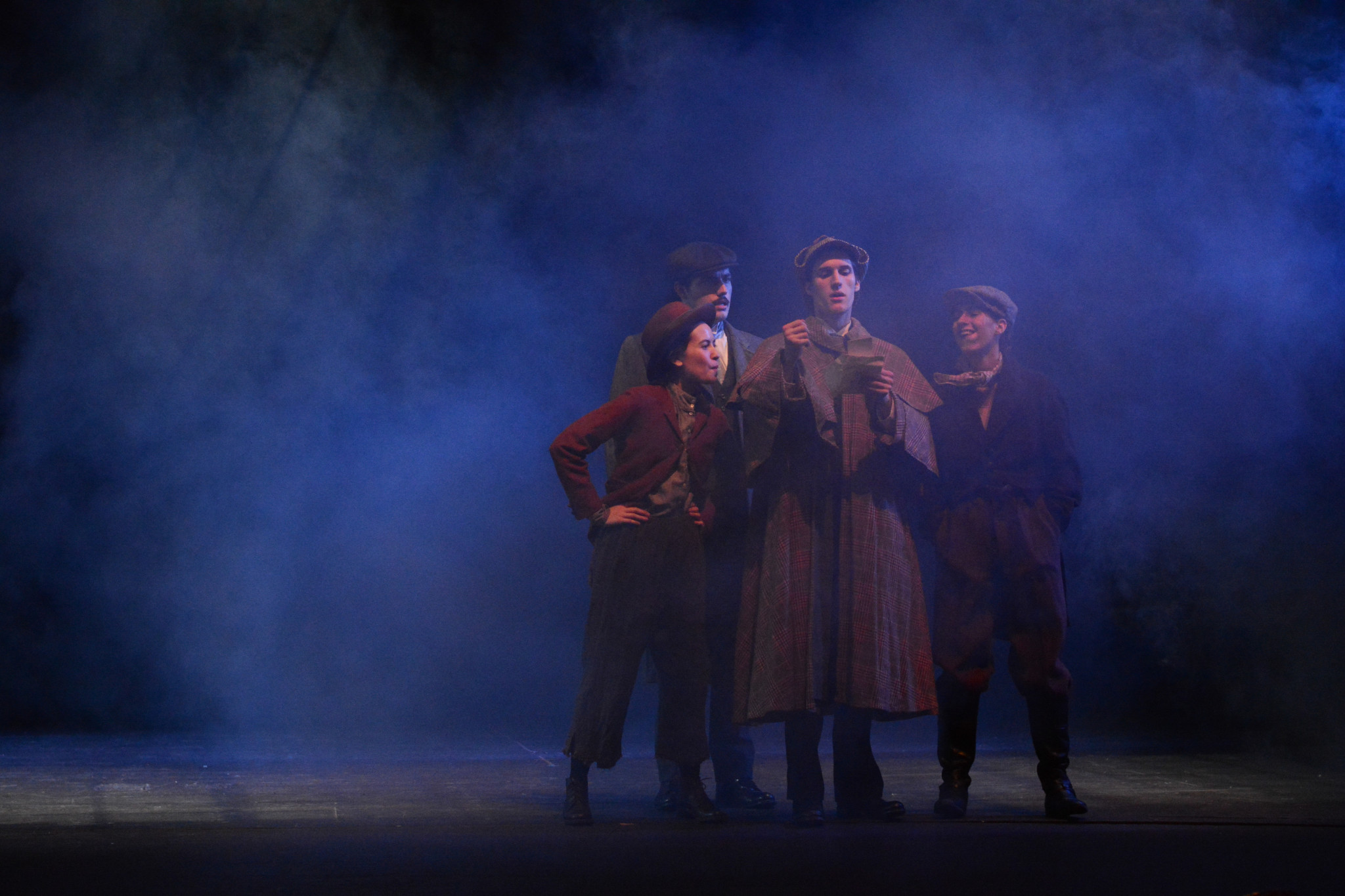 If you were looking for a howl over the weekend — either from a dark, creepy hound or from your own laughter — then you needed to search no further than the riveting and hilarious show “Baskerville,” put on by William and Mary Theatre April 20-23.

“Baskerville,” written by award-winning playwright Ken Ludwig, is a comedic rendering of the famed Sherlock Holmes story “The Hound of the Baskervilles” by Sir Arthur Conan Doyle. The play follows the detective Sherlock Holmes and Dr. John Watson as they grapple with the mysterious death of Sir Charles Baskerville, who is found dead on his estate near abnormally large canine footprints. Holmes and Watson begin to suspect that a curse has been placed on the Baskerville family by an extraordinary, vicious hound in the countryside, leading the main characters through urban and back-country Britain as they try to untangle this bizarre mystery.

The show maintained a lively comedic and dramatic energy throughout, buoyed by the fluid transformations of the actors and set design. Despite having to navigate many different tactical setting elements and complex characters, the show’s production team and cast kept up the fast-paced feel of the plot without allowing for too much confusion about the play’s events and without masking some of play’s subtle meta-theatrical elements. The show’s costumes had a half-authentic, half-aggrandized feel, contributing to the dramatic comedy of the characters and plot. From Sherlock’s colorful, extravagant robe to the cowboy-esque garb of Texan Henry Baskerville, the costumes accurately matched the personalities of the characters wearing them. The men’s slick, gelled hairstyles seemed to embody the quintessentially immaculate British gentleman of the period, and the memorable props, like Watson’s silver revolver and a strange naturalist’s large butterfly fit very well with the show’s comically engaging kinesthesis.

While the first characters you tend to think of in a Sherlock Holmes story are, of course, the pop-cultural icons Holmes and Watson, the supporting actors demonstrated a laudatory depth of skill. Whether they were lip-syncing opera singers, grungy urban British boys or stoic figures in large paintings, the actors had to navigate many hilarious and unforgettable roles. Six supporting actors shape-shifted continuously throughout the show into a wide array of character personalities and did so with a striking perspicacity. These metamorphoses often required them to speak in a host of different accents. Aside from the obvious British accent, the audience was struck for example with hearty and native-sounding Russian, Texan, German and Italian accents as these actors transformed into different personas while mostly maintaining audibility and linguistic clarity in their speech.

Clive LePage ’18, who played Sherlock Holmes, and Michael Williamson ’20, who played Dr. John Watson, successfully animated the typical traits we associate with such well-known characters, yet both added a bit of their own stylistic flare, so observing their characters proved a refreshing and engaging experience for Sherlock fans. LePage’s interpretation of Sherlock wonderfully accentuated his character’s scintillating severity while Williamson expounded brilliantly upon his character’s bumbling charm. As a duo, the two were deftly in sync, bouncing off each other’s humorous portrayals (sometimes in perfectly hilarious choreographic synchronization) winning the laughter of the audience. LePage seamlessly enunciated Sherlock’s long-winded, complex lines of dialogue and Watson fluidly executed his character’s lines and mobility through varying settings in the play.

Finally, the play’s technical elements, while sometimes extravagant, did not overshadow, but rather connected well with the actors navigating them. The show’s fast-paced nature did not seem to faze the technical accuracy, which was nearly always on cue whether it was the sudden sound of a vicious hound amid a creepy fog or yellowish light falling on a woman’s face exactly as she drew the curtains of an invisible window. The set also played with space to add complex layers at certain moments without confusing the plot. The setting easily transformed from the stony streets of London and 221 Baker Street to topographical countryside settings, giving an impression of authenticity.

Despite having a somewhat complex plot and host of characters to keep track of, the cast and production crew of “Baskerville” put forth an engaging, hilarious performance with many distinctive elements without overwhelming or confusing its audience. The humorous, memorable performances of the actors combined with the show’s grandiose aesthetic components were consistently strong and were certainly far from “elementary.” The performance took the audience back in time and across an ocean into the entertaining world of Sherlock Holmes.