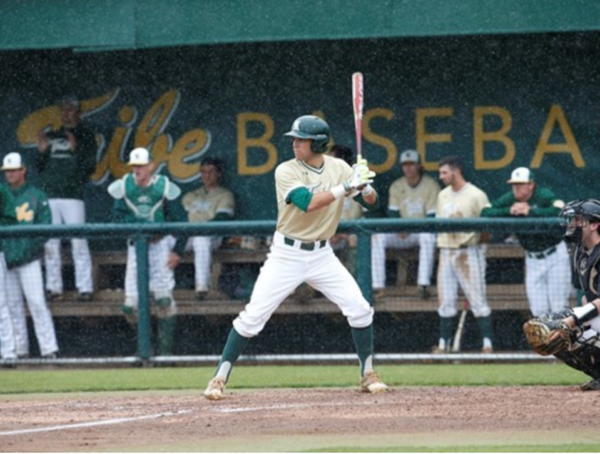 Over William and Mary’s summer break, the Tribe ended its season with a 32-25 (15-8 Colonial Athletic Association) record. The College was eliminated in the double-elimination CAA conference tournament after going 1-2 over three games in Wilmington, N.C.

The College began its postseason with an opening round matchup against Elon May 25. The Phoenix jumped out to an early lead with a run in both the first and second innings off of senior starting pitcher Daniel Powers. The Tribe was still down 2-0 in the bottom of the fifth inning when freshman third baseman Patrick Ryan led off the inning with a single. After sophomore shortstop Kyle Wrighte walked, freshman designated hitter Brandon Raquet stepped to the plate. Raquet ripped a double down the first base line, scoring both Ryan and Wrighte on the play to knot the game up at 2-2. Later in the inning, the College was able to take a lead they would not relinquish. Raquet was able to dash home on a throwing error by the catcher to give the Tribe a 3-2 advantage. The College would add two more runs in the bottom of the eighth, including one run off a triple by Raquet. The College retired the Phoenix in the ninth inning to seal a 5-2 victory.

In a winner’s bracket game between 1-0 teams, the Tribe took on the Seahawks of UNC-Wilmington May 25. Bodie Sheehan took the mound for the Tribe, but was unable to come away with the victory. He pitched five and one-third innings, giving up five runs. Meanwhile, the Tribe bats got off to another slow start and the Seahawks took a commanding 6-0 lead. The College started a late rally in the eighth inning when sophomore center fielder Owen Socher smashed a solo shot down the left field line to cut the Seahawks lead to five. The Tribe added another run in the ninth inning, but its rally fell short and the Seahawks claimed a 6-2 win over the College.

The College faced elimination May 26 when it played the College of Charleston. The game was a back-and-forth affair, and the Tribe fell behind early once again. However, it exploded for four runs in the bottom of the second inning to erase a 3-0 deficit and take a 4-3 advantage. The Tribe maintained its lead until the top of the seventh inning when the Cougars scored two runs to deadlock to the game at 6-6. Neither team was able to score again by the end of the ninth inning, so the elimination game went to extra innings. In the top of the eleventh inning, Charleston left fielder Joey Mundy led off for the Cougars. Mundy doubled down the right field line. He advanced to third base on a sacrifice bunt and then scampered home on a sacrifice fly to give the Cougars the go-ahead run. The Tribe had one more chance to tie the game in the bottom of the eleventh, but stranded the potential tying run at second base. The Cougars left with a 7-6 win and the defending CAA champion Tribe was eliminated from the 2017 conference tournament.

The eventual CAA tournament champion was Delaware, who received an automatic bid to the NCAA baseball tournament. They were eliminated in the Lubbock regional, going 0-2.

The Major League Baseball draft took place from June 12-14. The College had three players drafted over the forty rounds of the draft. In the third round, sophomore pitcher Nick Raquet was selected by the Washington Nationals becoming the third-highest draft pick in school history. In the fifth round, junior infielder Cullen Large was drafted by the Toronto Blue Jays. Senior pitcher Nick Brown was selected by the Minnesota Twins in the thirty-second round, giving the Tribe three or more players drafted in the same year for the fifth time ever.

Despite having a winning season, the Tribe did not repeat as CAA champions and will look to reclaim its CAA crown and return to the NCAA tournament in 2018.