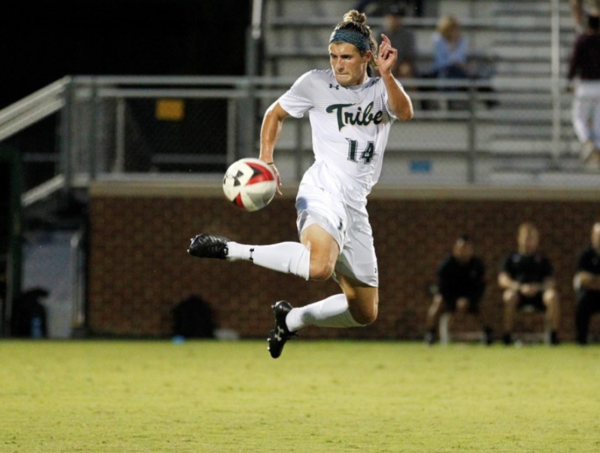 Friday, William and Mary hosted the Loyola Greyhounds (2-0-1) for its second consecutive home match. The match ended in a 0-0 tie after the game was called at the end of regulation due to heavy rainfall. The College (1-1-1) was coming off a home-opening victory over North Carolina State 3-2 to bring the Tribe’s record to 1-1 on the year. The College lost its first match of the year to Michigan 1-0 in Ann Arbor.

The physical match pitted two strong teams that were preseason favorites in their respective conferences. Rain throughout the day leading up to the match continued throughout the contest, leading to slippery conditions.

“I don’t think there’s anything that can keep us from having a good game when we’re out at home,” senior midfielder William Eskay said. “We’re always going to put out a good performance regardless of the field conditions.”

The first 10 minutes of the match were fairly even in terms of possession, with Loyola getting the first chance of the game in the fourth minute. Forward Josh Fawole attempted a long-distance shot from outside of the box that floated towards the corner of the net, requiring Tribe senior goalkeeper Phil Breno to swat the ball out of play for a corner kick. In the seventh minute, the College responded with a corner kick of its own, taken by junior midfielder Antonio Bustamante; however, the Tribe was unable to convert this opportunity either.

At about the tenth minute, the College started to take control of the match and much of the action was taking place in its attacking third. The Greyhounds were able to facilitate some chances of their own around the midway point of the first half to take some pressure off of their defense. However, probably the best chance of the first half occurred in the twenty-fourth minute when Bustamante dazzled the crowd with a series of moves, weaving through the Loyola defense before cracking a low, hard shot to the right side of the goal that required a diving stop from Loyola goalkeeper Chase Vosvick.

The first half was very chippy, with some hard tackles and shoving occurring throughout the half. The Tribe had two players receive yellow cards: Eskay in the fifteenth minute and freshman defenseman Sam Golan in the twenty-fourth.

Along with having perhaps the best shot of the half, Bustamante also had several key passes that led to chances for the College, including one in the fifteenth minute that set Eskay up for a good scoring chance inside the box.

The Tribe controlled most of the last 10 minutes of the half but was still unable to obtain the coveted breakthrough, and the score remained deadlocked at 0-0 at the break. The College outshot the Greyhounds 9-1 in the first half, including 4-1 in shot on goal.

The Greyhounds came out strong in the second half, controlling the first 10 minutes of the half. They had several quality chances including arguably their best chance of the game thus far in the fifty-third minute when a hard shot by freshman midfielder TJ Walker required a nice save from Breno.

The Tribe lost all of its momentum from the end of the first half, but was able to get more possession around the sixtieth minute. After a couple of decent chances, the College earned a corner kick in the sixty-seventh minute. Bustamante bent the ball into the box onto the head of Golan, who flicked the ball towards the top, right corner of the net. Vosvick made a fantastic leaping save to punch the ball over the net, keeping the match scoreless.

We’re always going to put out a good performance regardless of the field conditions.”

The College continued to get more close chances over the next 10 minutes, but was denied time and time again by the strong goaltending of Vosvick. In the sixty-ninth minute, sophomore midfielder Julian Ngoh nearly put the Tribe ahead, but Vosvick was able to keep the ball out of the net. In the seventy-sixth minute, Bustamante and Eskay led a breakaway downfield with crisp passes back and forth, with the ball ultimately ending up on the foot of junior forward Ryder Bell. His shot was ripped towards the top of the net, but once again Vosvick made the save.

As the match entered the eightieth minute, the pace of play sped up significantly as both teams pushed to find a game-winner. The rain which had persisted throughout the game began to come down even harder, further worsening the playing conditions. Despite a couple of chances for each team, no one was able to score before the end of regulation. In the ninetieth minute, junior midfielder Xander Saling was sent off with a red card, meaning that the Tribe would have a man-advantage in overtime.

“We play a tough schedule every year, so these guys know what it’s like to go on the road to difficult places and play against good teams,” head coach Chris Norris said.

Due to the deteriorating conditions of the pitch, the officials called the game after regulation, calling the match at a 0-0 tie. The Tribe will be on the road for the next three matches and will play George Washington Tuesday.