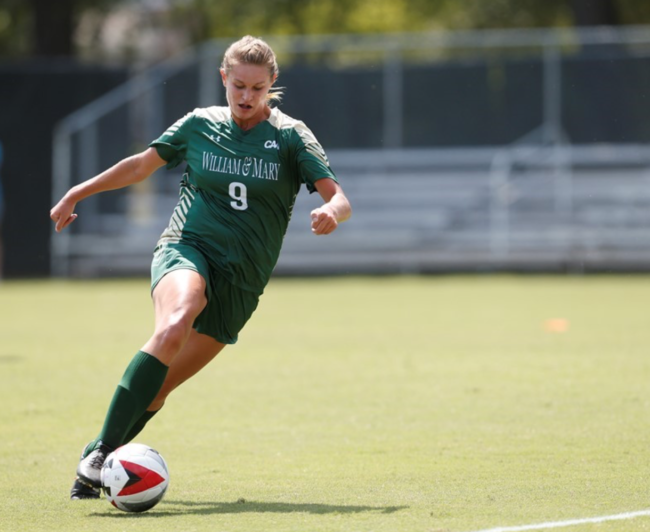 William and Mary’s losing streak extended to four with road losses to Maryland and DePaul this week. The Tribe falls to .500 after it opened the season with four straight wins.

The College (4-4) fell behind the Terrapins (6-0-1) within three minutes of kickoff Tuesday night and never recovered, losing to Maryland 1-0. Terrapins midfielder Madison Turner latched onto a pass from teammate Jarena Harmon in the third minute and finished from five yards out, the eventual game-winner coming off the first shot of the match.

Maryland continued to create the majority of goal-scoring chances as the game progressed, managing 15 shots (eight on goal) compared to the Tribe’s eight (two on goal). College senior goalkeeper Grace Smith kept the Terrapins scoreless the rest of the match, however, recording seven saves.

The Tribe came closest to equalizing in the 80th minute, a strike from senior defender Elysse Branton beating the Maryland goalkeeper, but hitting the post instead of the back of the net. The Terrapins saw out the final 10 minutes to seal the victory, remaining undefeated while the College fell to 4-3.

“Despite the shot count, I thought the game was more 50-50. We conceded an early goal, and it’s always tougher to come back after an early goal,” William and Mary head coach John Daly told Tribe Athletics. “I thought we got some good chances, but we just didn’t convert them as we should.”

The Tribe’s losing streak continued Sunday in Chicago, Ill., with DePaul (4-4) defeating the College in lopsided fashion, 4-0. Blue Demons forward Franny Cerny recorded a hat trick for the hosts, opening the scoring in the 34th minute after latching onto a deflecting shot and firing the ball into the net.

Cerny doubled DePaul’s advantage just before halftime, finishing off an assist from forward Morgan Turner in the 44th minute. She then completed her hat trick in the 48th minute, beating Smith with a shot into the upper left corner of the Tribe net to give the Blue Demons a 3-0 lead.

I thought we got some good chances, but we just didn’t convert them as we should.”

The deficit grew to four in the 69th minute, with DePaul forward Jade Eriksen-Russo netting her first career goal after teammate Madeline Frick’s shot hit the crossbar. Eriksen-Russo quickly deposited the rebound into the net to seal the 4-0 result, the Tribe’s worst loss of the season.

In spite of the one-sided nature of the scoreline, the Tribe created several goal-scoring chances, putting six of its seven shots on target. However, DePaul goalkeepers Lauren Frasca and Vanessa Nigg combined to preserve the shutout, Frasca making five of the Blue Demons’ six saves.

The College has now been held scoreless in three of its past four games, all losses, scoring just one goal in the home defeat to Wisconsin last week. In the four victories to open the 2017 season, the Tribe averaged 2.75 goals per contest.

The Tribe will look to get back on a win streak next Sunday in a home matchup against UNC Greensboro, the final non-conference game of the season. Kickoff from Martin Family Stadium at Albert-Daly is scheduled for 2 p.m.