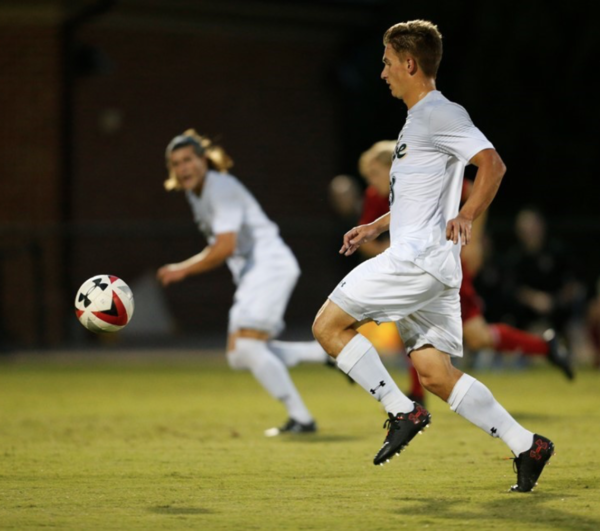 Tuesday, William and Mary traveled to D.C. to challenge George Washington. After an uneventful and scoreless first period, the Tribe left the District with a 2-1 win. Saturday, the College competed in its first Colonial Athletics Association matchup against the Drexel Dragons.

Although plenty of shots were taken in the first 45 minutes, neither the Tribe (2-1-2, 0-0-1 CAA) nor the Colonials (1-3-0) could convert on any of their chances. The first shot was taken by George Washington midfielder Brady O’Connor in the third minute, but was saved by Tribe redshirt senior goalkeeper Phil Breno. The Colonials took another shot in the 15th minute, this time by midfielder Oliver Curry, marking another save by Breno.

The College’s first shot attempt came from freshman defender Sam Golan in the 16th minute, but the shot went wide of the goal. Another attempt came as a header shot by sophomore midfielder Reeves Trott in the 17th minute, following two fouls on the Colonials.

Senior forward William Eskay attempted a shot in the 24th minute, but Arne Hofs moved quickly and saved the goal. The next shot by the Colonials came from O’Connor again, but this time the shot went high, causing no pressure on Breno.

Following another handful of unsuccessful attempts on both sides, a yellow card was issued to George Washington forward Christian Lawal with three minutes left in the period. Lawal was subbed out for midfielder Pierce Williams.

The second period started with a quick shot by Colonials midfielder Alex Conning. Although the shot went high, Breno was on his toes and ready for the move. At the 66th minute, junior forward Antonio Bustamante took two shots. The first was saved by Colonials goalie Arne Hofs while the other went wide of the goal.

George Washington pulled off the first goal in the 69th minute. The first successful shot of the night was taken by Colonials forward Oscar Haynes Brown with an assist from Colonials midfielder Drini Redzepi.

The Tribe picked up on the Colonials’ energy and finally put one in the back of the net in the 73rd minute, with Eskay scoring off an assist by junior defender Marcel Berry.

A goal by junior forward Ryder Bell off an Bustamante assist put the Tribe in the lead 2-1 with less than nine minutes left in the contest. The score remained the same for the remainder of the match.

Saturday, the College took on Drexel (0-2-1, 0-0-1) for its first conference matchup of the season. The contest ultimately ended in a 0-0 tie after strong performances by both goalkeepers.

The first overtime period was uneventful. The only shot taken was by Eskay with 11 seconds left in the period. The shot was blocked by a defender before reaching the goal.

The final overtime period, while more eventful, still ended without any points on the board for either side. Drexel fired off one shot to the Tribe’s two, one high by Eskay and one wide by junior midfielder John Fuquene.

Combined, the teams took 28 shots, with 11 of those on goal, but neither team scored. The match was decided in a 0-0 tie in the first game of CAA play.

The Tribe will continue its road trip in Cary, N.C., and take on North Carolina Sept. 13 at 7 p.m.