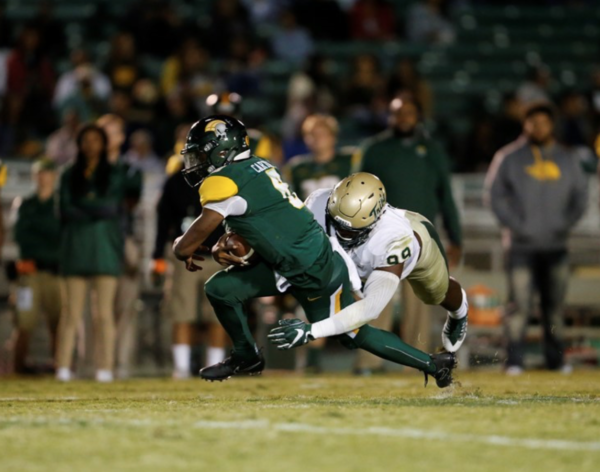 Saturday, William and Mary matched up against its second consecutive in-state opponent. The College traveled to Norfolk to take on Norfolk State, looking to bounce back from an opening-week road loss at the hands of the Virginia Cavaliers. The Tribe (1-1) was able to defeat the Spartans 20-6 to avoid an 0-2 start to the season. Junior quarterback Tommy McKee helped lead the Tribe to victory in his second career start with a strong performance on the ground and in the air, as he led the College in both rushing and passing.

The game got off to a slow start as neither team was able to put any points on the board early. The Spartans received the opening kickoff and had the first opportunity to take the lead in the game. However, after picking up one first down, they were stymied by the Tribe’s defense. A sack by senior defensive tackle Isaiah Stephens for a loss of 10 yards was key in forcing the Spartans to punt, giving the College its first offensive possession of the game.

After a short punt by Norfolk State punter Taylor Goettie, the Tribe took over at the Spartans’ 45-yard line. With a short field, the College had an early chance to seize the lead. McKee had a couple of clutch plays to keep the drive alive for the Tribe. Facing a 4th and 4 at the Spartans’ 39-yard line, McKee found senior wide receiver Daniel Kuzjak for a five-yard gain and a first down. Then McKee displayed his mobility when he scrambled for a 12-yard gain and another first down. However, he was sacked on a third down later in the drive, forcing the Tribe to attempt a 42-yard field goal. Sophomore kicker Kris Hooper, who made a long field goal in the previous game against Virginia, was unable to connect on this attempt, and the ball sailed left of the uprights, keeping the score even at zero.

The score was still 0-0 as the game moved into the second quarter. However, both teams were able to move the ball more effectively. After McKee threw an interception while the Tribe was driving in Spartan territory, the Spartans went on a long drive. They entered the red zone for the first time in the game; however, the Tribe defense stood tall and stopped Norfolk State on 3rd and goal from the two-yard line. The Spartans decided to settle for a field goal and took a 3-0 lead over the Tribe midway through the second quarter.

After the teams traded three-and-outs, the College got the ball back again at its own 29-yard line. Once again, McKee was able to use both his legs and arm to move the Tribe down the field. He broke off a long 28-yard run to push the Tribe into Spartan territory before being shoved out of bounds at the 29-yard line. Later in the drive, McKee found senior tight end Andrew Caskin with an 18-yard strike for the game’s first touchdown, giving the Tribe a 7-3 advantage after Hooper added the extra point.

Once again, the Tribe’s defense forced the Spartans into a three-and-out, giving the College the ball back with less than two minutes remaining in the first half. The Tribe was able to run a nearly perfect two-minute drill that culminated in another touchdown for the College. McKee found redshirt freshman running back Jaret Anderson on 3rd and 6 for a 25-yard gain to the Spartans’ 34-yard line to extend the drive. The Tribe had another third down conversion to keep the drive going before it faced a 3rd and 6 on the Spartans’ 20-yard line. With only eight seconds remaining in the half, McKee found Kuzjak for a 20-yard touchdown pass to give the College a 13-3 lead after the failed extra point.

The Tribe held this 10-point lead at halftime. At the start of the third quarter, the Tribe received the kickoff. After scoring on the last two possessions of the first half, McKee looked to keep the Tribe offense rolling. The College had moved down to the Spartans’ 39-yard line where it faced a 3rd and 7. McKee once again demonstrated his ability to run the ball as he broke off an 18-yard run to the Spartans’ 21-yard line for a Tribe first down. On the following play, McKee picked up his third passing touchdown of the day when he completed a pass to redshirt freshman freshman Tyler Crist for a 21-yard score. Hooper added the extra point to give the Tribe a three-possession lead, 20-3.

On the ensuing drive, the Spartans had another long possession but once again were unable to find the end zone. They settled for a field goal to cut the Tribe’s lead to 20-6. The Spartans had another drive into Tribe territory in the middle of the fourth quarter but were forced to go for it on fourth down at the Tribe’s 24-yard line. They were unsuccessful, as Stephens pressured Spartan quarterback Juwan Carter into an incomplete pass. The Tribe got the ball back with just over six minutes remaining and were able to run the clock out to seal a 20-6 victory.