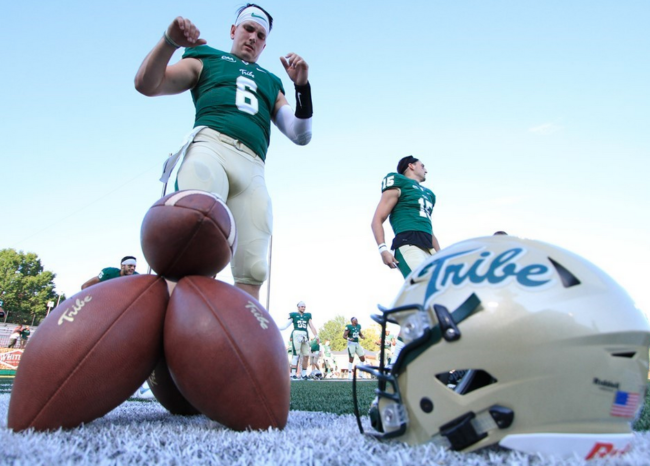 Saturday evening, William and Mary showed glimpses of greatness in a strong 30-9 win against Bucknell in its home opener at Zable Stadium, but still clearly has room for improvement.

Junior quarterback Tommy McKee started his third game for the Tribe. Although his stat line looked fairly mediocre, Tommy was very comfortable making great passes in big situations. This is certainly a marked improvement from the previous two weeks, where he never seemed calm and collected in the pocket.

Late in the first quarter, the Tribe steamrolled down the field with multiple impressive runs from true freshman Nate Evans and pin point passes from Tommy McKee. The highlight of the drive was a 34-yard run by Evans, which set him up for an easy one-yard punch in touchdown two plays later. Evans’ explosiveness added a new dimension and the much needed sparkplug to the Tribe’s offense in the absence of sophomore running back Albert Funderburke, who remains out with injury. At the end of the first quarter, the Tribe were in steady control with a 7-0 lead.

Without Funderburke, the Tribe continued to lean on a committee lead by Evans and redshirt freshman running back Noah Giles. Evans ended his night with 18 carries for 89 yards and a score, while Giles carried 8 times for 31 yards and a score. Both looked effective at times, but Evans was clearly the best rusher of the day, averaging almost five yards per carry and breaking free for big gains on several occasions.

The College continued to control the game into the second quarter. After a remarkable run by redshirt freshman tailback Jaret Anderson, the College seemed set up for another easy punch in, but was unable to convert in the red zone and was forced to settle for a 20-yard field goal. This drive signified a common problem for the Tribe this season. Just as the College makes strides towards greatness, it continues to miss out on great chances to take commanding leads.

Bucknell seemed to take all the momentum toward the end of the second quarter. After what seemed to be a fumble recovery for a touchdown by the Tribe to give them a 16-0 lead, the ruling was quickly overturned as replay showed the Bucknell receiver’s knee on the turf before the ball came out. Bucknell continued to easily drive down the field with passes from quarterback Matt Muh and ended its drive with an eight-yard touchdown pass to Andrew Podbielski. After a complete lack of offense by the College on its next possession, Bucknell made it a one-point game with a 33-yard field goal at the end of the half.

The College’s offense fizzled out in the second quarter, only producing 17 offensive yards after collecting 104 in the first quarter alone. Whether it was poor play calling or awful execution, the College played one of its worst quarters this season.

The Tribe came out into the second half determined to put the game away. Early in the third quarter, McKee and Giles were able to drive the Tribe down the field 81 yards in six plays to give the Tribe their second touchdown of the evening with a 15-yard run score by Giles to cap off the drive.

The College’s defense played amazingly in the second half. Led by defensive playmakers sophomore linebacker Nate Akins and junior linebacker Josh Dulaney, the Tribe was able to rack up four sacks in the second half and six on the night. The defense itself seems to have made tremendous strides since last year, after only gathering 10 total sacks last season.

Midway through the third quarter, Atkins made a punishing hit which led to a fumble recovery for a touchdown by sophomore safety Corey Parker. However, Parker was then ejected from the game for his second unsportsmanlike conduct penalty after jumping into the end zone and flipping the ball in a flashy manner. It was fortunate that the College had a big lead, as that otherwise would have been a costly mistake by the young safety.

Toward the end of the third quarter, the College continued to punish Bucknell as McKee closed the quarter with a beautiful 60-yard drive ended by a four-yard pass to redshirt freshman fullback Tyler Christ for a touchdown. The college was able to hold its lead throughout the fourth quarter to clinch its second win of the season.

The College seemed unstoppable on both offense and defense in the second half, scoring 20 unanswered points and racking up 115 total yards on offense. Defensively, the College shut out Bucknell and only allowed 42 total yards the rest of the game after giving up 184 in the first half.

After this week’s bye week, the Tribe will look to continue its winning streak against Stony Brook next Saturday, Sept. 30 at Zable Stadium. The Tribe will hope to get star tailback Albert Funderburke and star wide receiver DeVonte Dedmon back into the action as the team enters conference play.