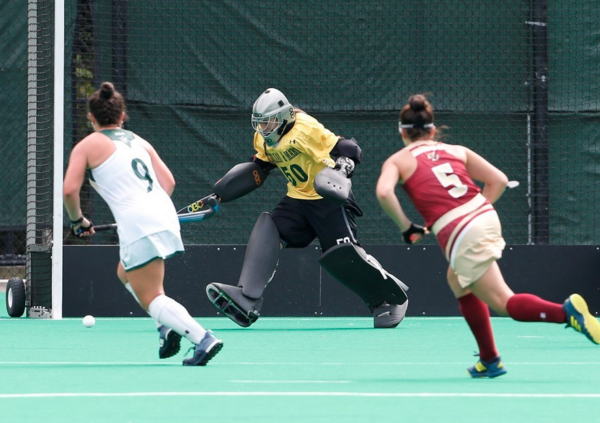 No. 18 William and Mary split a pair of home games over the weekend at Busch Field, falling in dramatic fashion to Pacific Friday 5-4 before routing La Salle Sunday, 8-0.

Friday night started promisingly for the Tribe (6-4), with the College jumping out to a 2-0 lead within the opening 20 minutes thanks to goals from senior midfielder Emma MacLeod and sophomore forward Woodard Hooper. The Tigers (4-6, 0-2 America East) quickly cut the Tribe advantage in half, however, when Pacific forward Kriekie van Wyk slotted a shot past sophomore goalkeeper Morgan Connor in the 22nd minute.

The second half started with a bang as van Wyk tied the game at two just a minute after the restart. The teams began to trade goals as the half progressed, MacLeod restoring the Tribe’s lead in the 43rd minute before Tigers defender Savannah Burns canceled it out with a goal of her own. Four minutes later, senior forward Cammie Lloyd scored for the Tribe only to see Pacific once again equalize, this time through forward Gaby de Kock.

The Tigers took their first and final lead of the game in the 58th minute, Burns assisting Pacific midfielder Ash Rutherford for the game-winning goal. Hooper and Lloyd came closest to tying the game again for the Tribe, but saw their efforts saved by Tigers goalkeeper Marlise van Tonder. The College ultimately fell 5-4, the Tribe’s third straight loss following defeats at the hands of Virginia and Boston College the week before.

The streak would not extend to four, as the Tribe trounced the La Salle (5-3, 2-1 Atlantic 10) Sunday afternoon, scoring early and often to ensure there would be no comeback this time.

By halftime, the College had already put six goals past the La Salle defense, each goal scored by a different Tribe player. Sophomore forward Cata Days got the scoring started in the sixth minute, the College outshooting the Explorers 22-1 in an utterly dominant first-half performance.

Lloyd, who scored her team-leading seventh goal of the season Sunday to extend the Tribe’s lead to 6-0 late in the first half, said the College did a great job playing as a cohesive unit.

The College added two more goals in the second half to polish off the 8-0 final scoreline, the third most goals the Tribe has ever scored in a single match. With eight goals and eight assists, the College also accumulated a team-record 24 points (two points for a goal, one for an assist), surpassing the previous high of 23 set against Lehigh in 1990.

After the record-setting performance, Tribe head coach Tess Ellis lauded the team’s improvement from last season into this season.

“I was saying to someone the other day that where we were 12 months ago to where we are now, it’s just leaps and bounds,” Ellis said. “Our stick work’s got stronger, our system is definitely stronger … The strength of our overall squad this year has really helped us to keep up the tempo and keep up with some of these big teams.”

The College will continue its five-game homestand Friday night with its first Colonial Athletic Association matchup of the season, taking on Hofstra at 5 p.m. That will be followed by a visit from another conference opponent, Northeastern, Sunday at 1 p.m.