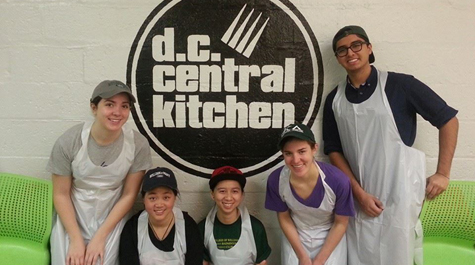 Katherine Webb ’18 has a passion for service that resulted in her appointment to the Virginia governor’s inaugural Millennial Civic Engagement Task Force. As one of 26 members, Webb will be representing the College of William and Mary in the task force. She was nominated for the role by Office of Community Engagement Director Melody Porter.

I feel honored to have been appointed to this task force as W&M’s representative,” Webb said in a written statement.

“I feel honored to have been appointed to this task force as W&M’s representative,” Webb said in a written statement. “I think that civic engagement is hugely important to connect anybody to their community, and that issue is especially relevant for college students who are living on campus in the college bubble. It can be so easy to get swept up in classes and extracurricular activities, so doing community service personally helps me ground myself and serves as a reminder that grades and school are not everything.”

The purpose of the task force, formed this summer by Virginia Governor Terry McAuliffe, is “coordinating and implementing statewide civic engagement initiatives and fostering the development and growth of a culture of civic engagement.”

Webb’s role is to help Virginia citizens find their voices and advocate opinions on the issues concerning communities — specifically, the role and involvement of college students. The main goal, according to Webb, is a positive kickback in college communities and beyond.

Webb is one of 17 student representatives on the task force. Those students, representing private, public, and community colleges are joined by Secretary of the Commonwealth Kelly Thomasson, Deputy Secretary of the Commonwealth Traci DeShazor and representatives from the State Council on Higher Education, Virginia 21 and the Virginia Community College System.

Virginia was proud to become the first state in the nation to commit to integrating service years on its campuses, and I am honored to take that challenge to the next level by launching the Civic Engagement Task Force,” McAuliffe said in a press statement.

“Virginia was proud to become the first state in the nation to commit to integrating service years on its campuses, and I am honored to take that challenge to the next level by launching the Civic Engagement Task Force,” McAuliffe said in a press statement. “Virginia millennials will set the course for the future of this commonwealth. Through this task force, our mission is to find new ways to encourage them to take ownership of their communities and civic institutions.”

During her freshman year, Webb joined Branch Out, an alternative break program, which is described by the Branch Out program’s website as an immersive service trip in which students engage in direct service with a community partner organization. Her first accomplishment was leading a trip to D.C. Central Kitchen as a site leader in spring 2013.

“It was my first experience doing any type of service trip, and this one was a service-learning trip,” Webb said. “Alternative breaks involve this education component before you go on the break. Then, you go on the break, do volunteering there, get to know community members and have wonderful conversations.”

Service plays a role in more than one aspect of Webb’s life. She is also an active member of the Kappa Delta sorority and leads a Girl Scout troop of rising sixth-graders. She also has experience working on the Lemon Project, which according to the Project’s website is a multifaceted and dynamic attempt to rectify wrongs perpetrated against African Americans by the College through action or inaction. The goal of the project is to unify the college community and the surrounding Williamsburg area in a positive manner.

Webb said she plans to use her role as a member of the task force to address what stops college students from getting involved in their communities, in the hopes of improving active participation.

The first step is communicating what is on the minds of students at the College.

“As a member of the task force, I hope to address the barriers to civic engagement that exist on our campus and to receive recommendations and help from the task force in addressing these obstacles,” Webb said in a written statement. “After hearing from W&M students at the round table discussion on Tuesday, Sept. 26, I plan to bring issues that I hear about back to our larger meetings as an entire task force to get input from other student representatives and members of the Governor’s office.”