Home Variety “Our Lady of Kibeho”: A haunting play about visionaries before the Rwandan... 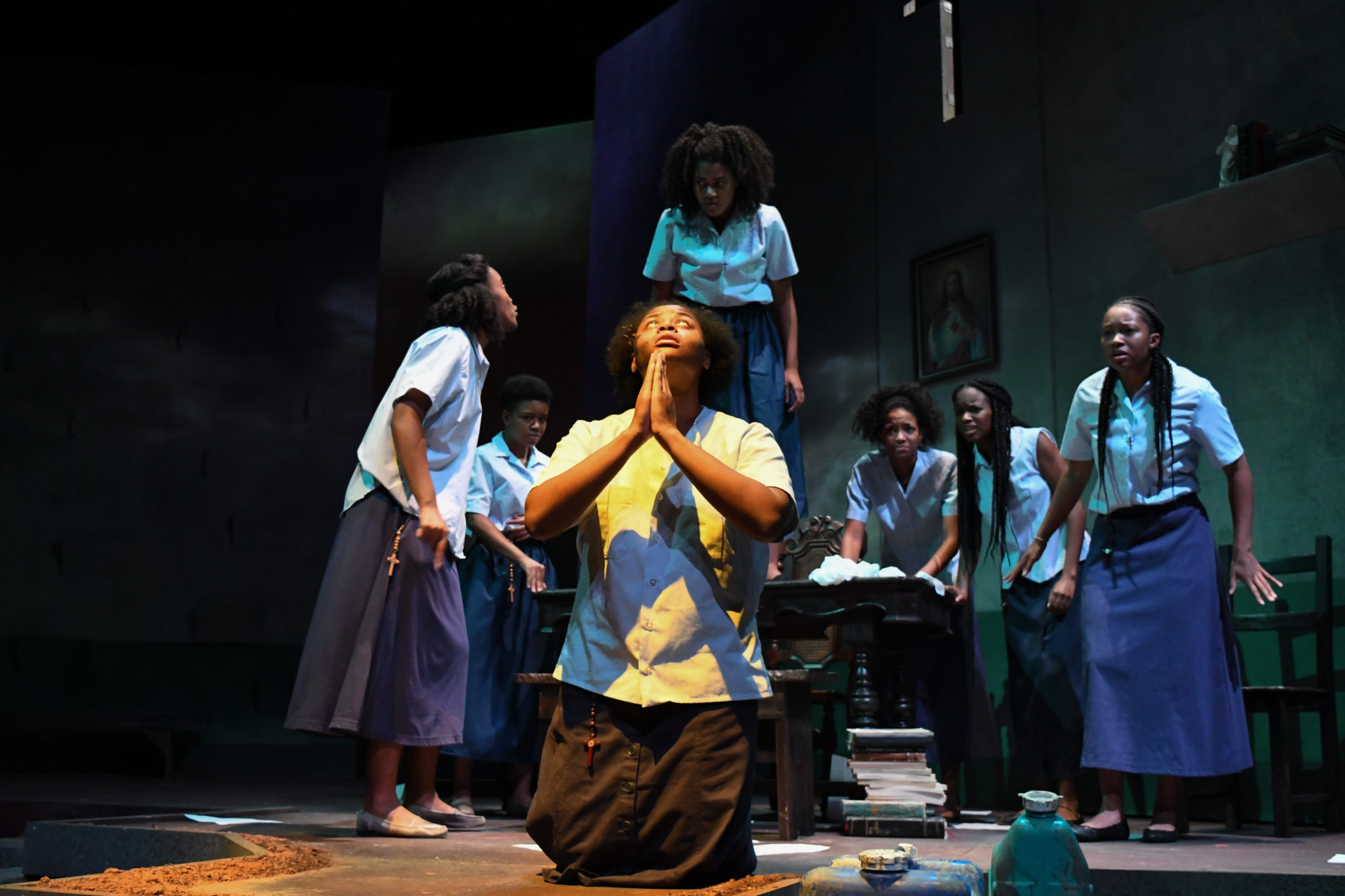 When someone you know says something unbelievable or something you vehemently disagree with, should you listen? What happens if you don’t listen, even if they were telling the truth? How would you know if it mattered until it’s too late?

These are the questions posed in William and Mary Theatre’s chilling, high-tension production of Katori Hall’s “Our Lady of Kibeho,” running from Oct. 5-8 in Phi Beta Kappa Memorial Hall.

Set in Rwanda in 1982 — only 12 years before the famous genocide of the Hutus and Tutsis in 1994 — the production draws connections between themes of race, gender, religion, love and hate that hit disturbingly close to home.

The play follows members of a Catholic school for girls as they come to terms with the apparent truth of one girl’s visions of the Virgin Mary. Alphonsine, one of the main characters, not only consistently has these visions, but draws two previously skeptical classmates into them as well. Everyone in the community is left questioning just how much they are willing to take based on faith. The adults in charge of the school argue about whether the girls are seeing something holy or simply seeking attention at the cost of the school itself. The tension mounts throughout the play, coming to a head as the visions of the Trinity turn truly horrific.

The 15-person cast does a brilliant job of creating rich characters, and when these characters collide, the effect is enthralling. Alana Canty-Samuel ’18, Danyel Lee ’18 and Arika Thames ’19 expertly switch between the mannerisms of schoolgirls making their way in a world that does not want to hear them, and the otherworldly trances of religious visionaries. Xavier Soto-Burgos ’20, skillfully balancing frustration, authority and open-mindedness, portrays Father Tuyishime, a priest trying to protect the girls at his school while struggling with his own religious devotion. The mercilessly skeptical obstacle to all of this is Sister Evangelique, played by Myriam Samake ’20, who is still made sympathetic with just the right balance of defiance and vulnerability. All the while the cast maintains Rwandan accents for almost three hours.

It reminds us that the most important thing we can do is be receptive to each other — before we’re unable to do so.

The production details are almost as impressive as the cast in drawing the audience in. The props leave no detail out, from real dust on old books to the inclusion of “tools” that clearly call eugenics to mind. A simple set comprised of a few imposing walls becomes a surface onto which scenes — first of beauty, then of complete terror — are projected over the course of the show. These images, created by Tennessee Dixon, a freelance set and projection designer, unconsciously work with the slowly building pace of the play to relax the audience or set it on edge as needed, and pull its members into the visions that the three girls have until you feel their emotions in real time. The lighting is well done and vital to the play, signaling when a “vision” begins, ends or goes sour.

The only music in the play is created by Abner Mondoloka ’18 on drums in such a way that it makes the tension grow almost without the audience noticing, until a scene reaches the breaking point. These instruments alone allow for several impressive rhythmic dance sequences, which include choreography by professor Joan Gavaler and Nadia Ross ‘17, as well as some singing by the cast. All of these components together add to the cultural element of the play and drive home the importance of the setting even more.

Overall, William and Mary Theatre’s production of the 2014 play “Our Lady of Kibeho” mesmerizes the audience even while showing it what it may not want to see. Questions of faith, personal tragedy, prejudice and motive mesh with a lurking tragic backdrop to leave playgoers haunted in the best way. The final notes of the play echo the all-too-familiar feeling of ending with more questions than answers in the face of unimaginable tension, and it reminds us that the most important thing we can do is be receptive to each other — before we’re unable to do so.