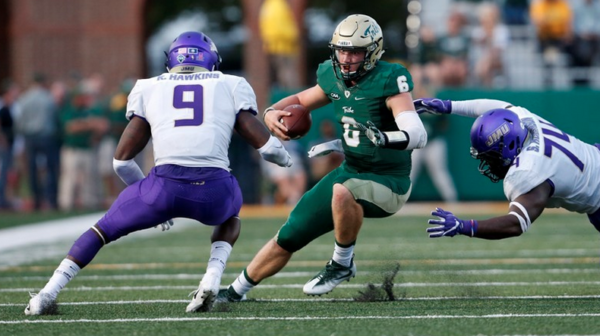 Saturday, William and Mary welcomed Colonial Athletic Association rival James Madison to Zable Stadium for its Homecoming game. The Tribe ultimately fell to the Dukes 46-14, with the College not scoring until the fourth quarter.

Freshman quarterback Shon Mitchell started for the Tribe. The Dukes scored the first points of the contest with four minutes left in the first quarter on a two-yard pass to tight end Clayton Cheatham from quarterback Bryan Schor. This put the Dukes up 7-0 over the Tribe on the only score of the quarter.

“You go into a game like that, you turn the ball over as many times as you do, you’re just not going to have a chance against many teams, especially a real good team like JMU,” head coach Jimmye Laycock ’70 said.

James Madison dominated scoring in the second quarter as well, starting with a 42-yard field goal by kicker Tyler Gray in the first minute. Freshman quarterback Brandon Battle came in for the Tribe late in the second quarter. The College fumbled the ball with 4 minutes, 37 seconds left in the quarter, leading to Gray scoring another three points for the Dukes with three minutes left in the half, putting James Madison up 13-0.

Battle threw an interception into the hands of safety Jordan Brown with less than two minutes remaining in the half. The half came to a close with a Dukes touchdown on a one-yard run by running back Marcus Marshall. The Tribe went to the locker room down 19-0.

“On the positive side, I thought defensively we really competed and played really, really well,” Laycock said. “We may have gotten worn down a little in the second half, but I thought we put our defense in a couple really tight situations, and they responded forced with a field goal.”

Junior quarterback Tommy McKee came in to play at the start of the second half, throwing an interception on his first drive into the hands of cornerback Rashad Robinson. The third quarter followed the same pattern of the first half, despite putting in a third quarterback. Schor ran the ball seven yards into the end zone, racking up more points for the Dukes.

“We may have gotten worn down a little in the second half, but I thought we put our defense in a couple really tight situations, and they responded forced with a field goal,” Laycock said.

On the Dukes’ next possession, freshman defensive tackle Will Kiely sacked Schor for a loss of seven yards on the third down. Less than four minutes after the Dukes’ touchdown, kicker Ethan Ratke kicked a 36-yard field goal. Sophomore running back Albert Funderburke rushed and fumbled the ball with less than two minutes remaining in the quarter, recovered by defensive lineman Andrew Ankrah at the JMU 34. James Madison held tight to its lead and the Tribe remained scoreless, 29-0.

“We started with Shon and you know he was okay, but we weren’t getting anything going. So we felt like, ‘well let’s try Brandon,’ and we put him in there and he had the turnovers,” Laycock said. “So basically, we went with Tommy the second half because he’s the best one on the read option.”

The College was still scoreless going into the fourth quarter. Marshall ran 27 yards for a touchdown less than two minutes into the final quarter, followed by another scoring run thanks to an interception by cornerback Jimmy Moreland on the Tribe’s first possession.

The College trailed 43-0 with 12 minutes left in the game. However, the Tribe came alive in the final quarter with a 33-yard touchdown pass from McKee to redshirt freshman wide receiver Jordan Lowery, putting seven points on the board for the Tribe with 10:11 remaining in the game.

With less than eight minutes remaining, McKee threw another interception, again right into Brown’s hands. James Madison scored its final three points on a 39-yard field goal from Ratke. With less than two minutes remaining in the game, redshirt freshman running back Noah Giles scored the Tribe’s second and final touchdown on a 66-yard run. Giles, the top of the Tribe’s offense for the game, posted a game high and career best of 74 yards on three carries.

“I just thought we were playing really, really hard,” Laycock said. “We did a pretty good job against that quarterback, getting pressure on Schor and trying to contain him … we got smart pressure on him, meaning that we got pressure and kept [Schor] contained.”

After three quarterbacks, two fumbles and four interceptions, the College dropped a hard-fought battle to the Dukes 46-14. Freshman punter Will Michael had one of his best performances of the season, averaging 44.3 yards on his seven kicks. The Tribe’s two interceptions came from senior safety Mike Barta and senior cornerback Aaron Swinton.

“We had to play mistake free and we didn’t,” Laycock said.

The College will travel to take on Maine this weekend, continuing conference play and looking to break its four-game losing streak. The Tribe will return home Nov. 4 against New Hampshire.

“I don’t think we’re back where we’ve started because we’ve put them in games and we’ve seen some stuff,” Laycock said. “Of course the quarterback is your focal point, but there’s a lot of other people that are involved offensively that have to do something.”