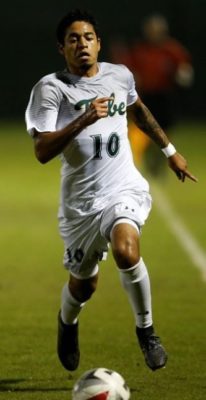 Tuesday, William and Mary traveled to South Carolina to square off against Costal Carolina. The Tribe (8-4-5, 3-2-3 CAA) secured its sixth game in a row without a loss, ending the game in a 1-1 tie against the Chanticleers (7-6-1).

In the 31st minute, senior forward William Eskay created a strong counter attack and carried the ball down the field before crossing it to junior forward Antonio Bustamante. Bustamante took a touch toward goal before scoring on Chanticleers goalkeeper Braulio Linares-Ortiz, marking the third consecutive game in which Bustamante has scored.

The Chanticleers responded within the next minute to balance the scoreboard. The ball came from the outside and was crossed from Coastal Carolina forward Frantzdy Pierrott to fellow forward Romario Piggott. Piggott headed the ball on frame and received the rebound before confidently placing the ball in the back of the net.

The rest of the game, including the overtime period, remained scoreless as both teams fought for another attempt to score.

The Chanticleers outshot the Tribe 12 to four, but both teams had three shots on frame. The Tribe only had two corner kicks compared to the Chanticleers’ nine.

The College was also forced to play without redshirted senior midfielder Riley Spain due to his accumulation of yellow cards in previous games.

Following the tie against Costal Carolina, the College stayed on the road to face Charleston in a match that ended in another 1-1 tie for the Tribe.

In the 64th minute, the Cougars earned their first and only goal of the match when Eli Dent lofted the ball into the 18-yard box and Vebjorn Krovel met the ball with a well-placed volley that would momentarily put Charleston in the lead.

The Tribe answered shortly after, knotting the score at one. In the 68th minute, junior midfielder Marcel Berry centered the ball near the top of the 18-yard line to junior forward Ryder Bell. Bell skillfully cut the ball back before placing a left-footed shot on the near post, scoring unassisted to level the playing field.

Both teams had additional opportunities to pull ahead, but neither was able to capitalize. In the 75th minute, Berry lofted a ball toward the center of the field, which Bell met with a header that sailed just wide of the post. In the second period of overtime, Bustamante took a well-placed corner kick, which Berry headed toward the upper left corner of the goal, just barely missing.

The Cougars also had several chances to score a decisive goal down the stretch. At the end of regulation play, midfielder Jake Nicholson took a 20-yard free kick for the Cougars that deflected off the top of the crossbar. Charleston midfielders Marcelo Malpartida and Lorenz Esposito both had shots on frame in the 103rd and 108th minutes respectively, forcing senior goalkeeper Phil Breno to make two saves to maintain the tie.

Both teams fought hard and physically in an attempt to push ahead on the scoreboard, as demonstrated by the six yellow cards in the game, including five in the second half. Each team had three yellow cards, but the Tribe committed 20 fouls compared to just 12 for the Cougars.

Finishing its season, the College will enter the CAA Tournament seeded fifth.

As the fifth seed, the Tribe will hit the road to play fourth-seed Hofstra in the Colonial Athletic Association Quarterfinals in New York Nov. 4. The match is scheduled to kick off at 7 p.m.