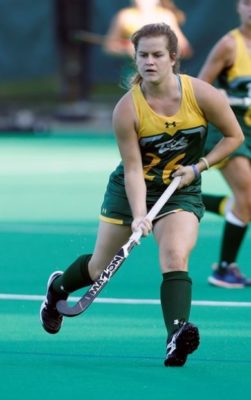 William and Mary wrapped up its regular season last Friday with a senior night matchup against 15th-ranked Colonial Athletic Association rival James Madison. The winner of the match would be seeded second in this weekend’s CAA tournament, while the loser would drop into third place. Despite claiming an early lead, the Tribe allowed the Dukes to tie the match in the second half and score the game-winning goal with just a couple minutes left in regulation. With the 2-1 loss to the Dukes, the Tribe finished its regular season 4-2 in the CAA, but had already qualified for the conference tournament with its victory over Drexel the previous Sunday.

The College (12-6, 4-2 CAA) wasted no time in jumping out to a 1-0 advantage over the Dukes (12-5, 5-1 CAA). Four minutes into the match, senior forward Cammie Lloyd fired a shot on goal that was deflected away by the Dukes’ goalkeeper Sara Kraeutler. However, senior midfielder Emma MacLeod pounced on the loose ball and hammered it into the goal. With just under 20 minutes left in the first half, the College withstood a flurry of chances by the Dukes. The Dukes earned two penalty corners in under a minute, but sophomore goalkeeper Morgan Connor made a big save to keep the Tribe in front. On the second penalty corner, the shot by midfielder Lisa Lejeune was deflected on the way to the goal and bounced harmlessly away. The two teams exchanged chances the last 20 minutes of the half, but neither team was able to capitalize on any of these. The first half was very evenly played, besides the one goal for the College, as both teams recorded seven shots.

At the start of the second half, the action continued to go back and forth. Each team had a handful of chances in the first 10 minutes of the second half, but the Tribe still clung to its narrow 1-0 lead from MacLeod’s tally over 40 minutes earlier. Finally, with just under 24 minutes remaining in the match, the Dukes found an answer to the College’s stingy defense. Midfielder Hannah Hall ripped a shot from just inside the circle that snuck inside the far post to tie the match, 1-1.

Over the next 20 minutes, each team desperately tried to find a potential game-winning goal. Just three minutes after Hall’s goal, Lloyd had a chance to put the Tribe right back on top. However, her effort went out of bounds just right of the net. After taking a timeout with just under 20 minutes left, the College once again put pressure on the Dukes. The Tribe earned its second penalty corner of the match with a little over 16 minutes remaining. MacLeod took the penalty corner and got the ball to senior midfielder Booter Ellis. However, Ellis’s shot was blocked and did not force Kraeutler to make a save.

As the match approached its final 10 minutes, overtime became increasingly more likely to determine the outcome of the match. The momentum swung back toward the Dukes as they had the next two chances. With 12 minutes left, midfielder Miranda Rigg fired a shot that Connor turned away. With less than four minutes remaining, Rigg hit another shot on goal, but Connor was up to the task again. Just seconds later, Lejeune got the ball and put a shot on goal. This time, Connor was unable to stop the shot and the ball went into the goal to give the Dukes a 2-1 lead with just three minutes left. The Tribe worked to respond and send the match to overtime, but was unable to create a shot in the final three minutes, giving the Dukes a 2-1 comeback win.

The College will get a rematch with the Dukes in Delaware, just seven days after the loss, for the CAA tournament semifinals. The tournament will include the top four teams in the conference and is hosted by the highest seed, Delaware. The winner of the tournament will receive an automatic bid to the National Collegiate Athletic Association tournament, which starts Nov. 8.

The second seed, by way of its comeback victory over the Tribe, will be James Madison. The Dukes have won their last four matches and will try to use that momentum in order to have success in the CAA tournament. The Dukes will have a rematch against the third-seeded Tribe, at 6 p.m. Nov. 3. The College has a balanced attack led by MacLeod, who has 11 goals on the season. She scored the only goal for the Tribe against the Dukes last weekend. Lloyd has also provided 10 goals this season for the College.

Senior midfielder Booter Ellis and sophomore midfielder Annie Snead lead the Tribe with five assists this season. The Tribe and the Dukes both beat Northeastern and lost to Delaware. The Dukes lost to the Blue Hens Oct. 8, 5-2 in Delaware. The Tribe came up short against the Blue Hens in a 3-1 loss. The Tribe will look to get revenge on the Dukes for knocking the College out of the CAA tournament last year and for the 2-1 loss last weekend on senior night in Williamsburg.