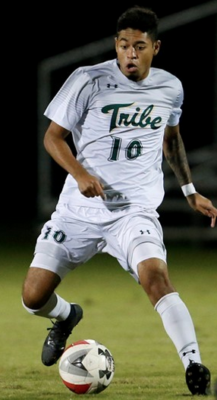 “Overall, we are certainly pleased,” head coach Chris Norris told Tribe Athletics. “Obviously to go on the road to a tough venue and beat a team that you have already beaten is tough to do. The guys’ attitude was good, and they did a great job of following the game plan. As a result, we were able to get an early goal to ease the pressure. Hofstra upped the tempo, and it was good for us to answer after they equalized. I felt like all our goals came at critical moments in the game.”

Bustamante set the tone early with an unassisted goal in the sixth minute of the game. He moved the ball from midfield toward Pride goalkeeper Alex Ashton before chipping the ball around him into the open net.

Hofstra answered this goal in the 27th minute with its only goal of the game. Pride defender Jon Fraser sent a corner kick to the front side of the six-yard box where midfielder Oscar Ramsay was ready to drive the ball to the near post with the back of his heel.

In the 36th minute, Bustamante added his second goal of the night to the scoreboard. Sophomore midfielder Julian Ngoh beat his defender to the end line and centered the ball to Bustamante, who netted it from the six-yard line.

This marked Ngoh’s third assist of the season and of his career. The College entered halftime leading 2-1.

Nine minutes into the second half, sophomore midfielder Reeves Trott was awarded a free kick for the Tribe after earning a foul at the 22-yard line. Bustamante took the free kick, bent it over the wall and placed it in the upper left corner of the goal, tallying his third goal of the evening.

Bustamante then registered his 12th goal of the season in the 78th minute to extend the Tribe’s lead to 4-1 with an assist from junior fullback Remi Frost.

The 12 goals contributed by Bustamante mark the most goals in a season since 2001, when Carlos Garcia registered a total of 15 goals. Bustamante is also the first player since Andrew Hoxie to score 10 goals or more in two consecutive seasons. Hoxie achieved this in 2008 and 2009.

“It was special,” Norris told Tribe Athletics. “One of the best things about the goals Antonio scored tonight, outside of the free kick, is that he got behind the defense. Last year, he was doing that a lot, but this year, his goals have come different ways. We have been preaching to our attacking players to get behind defense and get on the end of one. It was really encouraging to see Antonio do that, and he made three of them count.”

The Pride outshot the Tribe 18-11, with nine shots on goal as opposed to the College’s seven.

Redshirt senior goalkeeper Phil Breno kept the Pride at bay as he registered eight saves throughout the match.

During the game, the Pride was issued an array of colors, as three yellow cards and a red card were displayed to three men. Oscar Ramsay and Danny Elliott each received a yellow in the 55th and 80th minutes, respectively. Meanwhile, Luke Brown saw a yellow in the 85th minute followed by a red in the 86th.

“Overall, we are certainly pleased,” Norris told Tribe Athletics. “Obviously to go on the road to a tough venue and beat a team that you have already beaten is tough to do. The guys’ attitude was good, and they did a great job of following the game plan. As a result, we were able to get an early goal to ease the pressure. Hofstra upped the tempo, and it was good for us to answer after they equalized. I felt like all our goals came at critical moments in the game.”

Looking ahead, the Tribe will make the trek to Harrisonburg Nov. 10 to compete against James Madison (9-6-3) in the CAA Semifinals. This is the second consecutive year that the Tribe has advanced to the CAA Semifinals and the 15th time in the College’s history.

Previously in the season, the Dukes beat the Tribe 4-3 in a match hosted on Duke turf. The game will be streamed live on CAA.TV. The victor will then play in the CAA Finals Nov. 12, also in Harrisonburg.