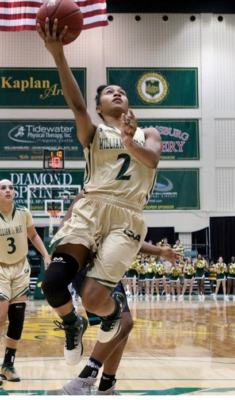 William and Mary opened its season Saturday on the road against Howard. The Tribe is looking to improve on a 20-11 campaign last year, where it went 9-9 in the Colonial Athletic Association. The College beat Delaware in the CAA Quarterfinals before getting blown out by top-seeded Elon in the CAA Semifinals, 88-60. Saturday, the College got off to a good start, as it cruised to an 83-71 victory over the Bison.

The Tribe jumped out to a big, first quarter lead that it would never relinquish. After falling behind 2-0 on the opening possession, sophomore forward Victoria Reynolds drained a three-pointer for the Tribe’s first points of the season. She made a layup on the next possession to put the College up 5-2. Reynolds was very active in the first game of her sophomore season. She finished with 19 points and six rebounds to help lead the College to its 12-point win.

After the Bison tied the game at nine with just over five minutes to play in the opening quarter, the Tribe went on a 9-0 run to give the College a commanding lead. Junior guard Bianca Boggs was an integral part of this scoring run. She put the Tribe up 11-9 with a layup and then came up with a steal just seconds later. She quickly turned the Bison’s turnover into points for the College with another layup. On the next possession, Boggs buried a three-pointer off an assist by senior guard Jenna Green. Freshman guard Nyla Pollard finished the run with the first points of her career on a short jumper to put the College. At the end of the quarter, the Tribe was up 28-12.

Early in the second quarter, Boggs and Reynolds each added another basket to give the College a 32-12 lead. After Boggs hit her third three of the game with 7:20 remaining in the half, the College regained its 20-point advantage, 36-16. The Tribe’s lead never dropped below 20 for the rest of the half. The Tribe drew a lot of fouls in the last seven minutes of the quarter and converted them into points from the charity stripe. In the last seven minutes of the half, the College earned seven trips to the line and went 9-15 on those attempts. Green was 6-8 at the line for the game as a part of her 15 points and four assists. She was the third player for the College in double figures for the game, along with Boggs and Reynolds. The Tribe took a 49-28 lead to the locker room.

The Bison came out stronger in the second half and worked to cut into the College’s big lead. They managed to get the deficit under 20 points a couple of times in the first few minutes, but the Tribe continued to respond. With 5:37 left in the quarter, freshman center Gabby Rogers made a layup on a fast break to stretch the Tribe’s lead back to 22, 57-35. Rogers finished with nine points and four rebounds in her debut for the Tribe. The Bison outscored the College 12-6 in the last five minutes of the quarter and got as close as 14 points, but the Tribe still took a 66-50 advantage into the fourth quarter.

With 3:35 left in the game, guard Sarah Edmond drained a jumper to cut the Bison’s deficit to nine, 74-65. This was the first time the College had not held a double-digit lead since the first quarter. However, the Tribe answered with another 9-0 run that finished with Boggs making three free throws to help ice the game for the College. Boggs led the Tribe in both points and rebounds, posting a double-double with 26 points and 11 rebounds. The Bison scored the last six points of the game, but the College still left with an 83-71 victory in the first game of the season.

This week, the Tribe has two more games, including its home opener. Tuesday, the College plays Fairfield at Kaplan Arena at 7 pm. Then, Friday night, the Tribe will travel to New York to take on St. John’s. The College will be looking to keep up its good start to the season and stay undefeated during non-conference action.