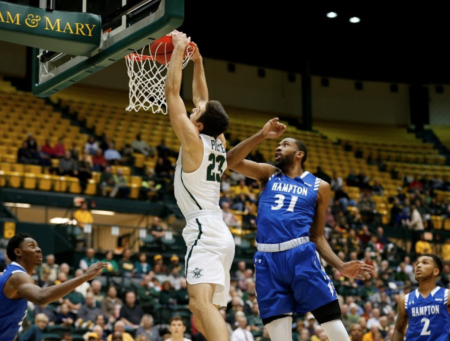 William and Mary played its first home game of the season on Wednesday against in-state foe Hampton. Last year, the Tribe was 13-1 at home, with its lone loss coming late in the season against a hot-shooting Hofstra squad. The College was seeking its first victory of this season after getting blown out on the road against High Point, 100-66. The Tribe emerged with a hard-fought 83-76 win in a back-and-forth affair.

“The will to win was evident today, our toughness showed,” head coach Tony Shaver said. “The first game, we had no toughness … we have to have that on a nightly basis.”

The Pirates (1-2) opened the scoring on a three-pointer a minute into the game, but the Tribe (1-1) quickly bounced back with four points of its own. Sophomore forward Nathan Knight scored his first points of the game on a jump shot with 18:10 left to help the Tribe retake the lead, 6-5. The Pirates pulled ahead by one again in the early going, but once again the Tribe answered. Sophomore forward Justin Pierce made a floater in the lane off an assist from senior guard David Cohn to put the College on top 10-9 at the under-16 media timeout.

After the timeout, Pierce scored once again to respond to a Pirates basket and give the College a 12-11 lead in a back-and-forth affair early. However, after a technical foul on Pierce with 13:15 remaining in the first half, he was forced to go to the bench with three fouls in the first seven minutes of the game.

“When [Pierce] got in foul trouble, I knew I would have to carry the weight for both of us,” Knight said.

The technical foul allowed the Pirates to take their largest of the game, thus far, 17-14. The Pirates surged ahead by six after a three-pointer, but Knight answered immediately with a three of his own to pull the Tribe within three, 20-17, with 11 minutes left in the half.

Forward Austin Colbert made yet another three for the Pirates following the timeout, but was immediately whistled for a technical foul. Cohn made both free throws to cut the Pirates’ advantage to four, 25-21 with just over 10 minutes to play. The College was finally able to get within one-possession after Knight made both free throws on a one-and-one. The Tribe trailed 27-24 at the under-eight timeout. Immediately following the timeout, Knight nailed two more shots from the charity stripe to cut the Pirates’ lead to one. After the free throws, Knight had 14 points to lead all scorers with 7:30 remaining in the half. The College was able to draw even less than two minutes later when freshman guard Jihar Williams sunk a three-pointer to tie the game at 29 with six minutes to play. The College retook the lead for the first time in nearly 10 minutes on a layup by senior forward Cole Harrison. The Tribe took that advantage to the under-four timeout, leading 33-32 with 3:43 to play in the opening half.

The will to win was evident today, our toughness showed.”

However, the Pirates responded quickly with a go-ahead basket with just over three minutes remaining to take a 34-33 lead. After Hampton guard Lysander Bracey missed a dunk in transition, Knight went to the line for his 13th and 14th free throw of the first half. He made both to even the score once again, 35-35 with two minutes to play in the half. On the ensuing possession, Bracey atoned for his miss on the previous possession by making a go-ahead three to put the Pirates back on top. After a turnover by the Pirates late in the first half, sophomore guard Matt Milon scored his first points of the game on a driving layup to give the Tribe a 39-38 advantage. The Pirates had the last possession of the first half, though, and guard Greg Heckstall nailed a three-pointer at the buzzer to give the Pirates a 41-39 lead going to the locker room.

The Pirates got the ball to start the second half, but were unable to score on their first possession. On the College’s first possession, Knight was fouled yet again and made one of two free throws to cut the deficit to 41-40. However, the Pirates scored on each of their next two possessions to stretch the lead back to five, 45-40 with 18 minutes remaining in the contest. At the other end, Milon drained a three from the left corner to pull the Tribe back within two points. After trading baskets, the Pirates took advantage of a missed layup by Cohn. Guard Jermaine Marrow attempted a layup of his own, banking it home to give the Pirates a 49-45 advantage. He scored again on the next possession, prompting Shaver to call timeout with 15:38 remaining and the College down 51-45. The six-point deficit matched the Tribe’s largest of the game, thus far.

The Tribe cut the Pirates’ lead in half following the timeout, on a three-pointer by junior forward Paul Rowley, but the Pirates answered with a three of their own just seconds later. The College did not allow the Pirates to extend the lead any further, and responded with a 7-0 scoring run before the media timeout with 12:49 left in the game. Knight made a shot in close before Milon scored the next five points on a three-pointer and a go-ahead layup to give the College a 55-54 lead, its first of the second frame. Following the media timeout, Pierce scored his first point in over 20 minutes, making one of two free throws to push the College’s lead to 56-54. The Pirates quickly regained the lead, though, after making a pair of free throws and scoring a breakaway layup with 11:51 to play in the game. Knight tied the game at 58 on the next possession, with a basket of his own.

“[Knight] was really, really special,” Shaver said. “He’s a competitive guy, a great kid and works so hard at improving his game. I’m glad to see him wearing a Tribe uniform.”

The Pirates scored six of the next seven points to retake a two-possession lead, 64-59 with 10 minutes remaining. The College went cold, missing several shots in a row, but the Pirates were unable to capitalize, and senior forward Oliver Tot pulled the Tribe back within three with eight minutes to play, 64-61. After giving up a basket on the following possession, Rowley and Milon answered with threes on back-to-back possessions to allow the College to regain a one-point lead. The Pirates called a timeout after Milon’s triple with 6:40 to play in the College’s home-opener.

“The first three really got me going, and then after that once you see it go in, it makes a world of difference,” Milon said.

After coming up with a stop after the timeout, Pierce converted a layup at the other end to give the Tribe a 69-66 advantage, its biggest of the night at that point. The Pirates fought back quickly, with five consecutive points to reclaim a 71-69 lead with under five minutes to play. After Cohn tied the game for the College, Bracey nailed a three to put the Pirates back on top heading to the final media timeout of the game with 3:24 remaining.

Out of the timeout, Knight hit two free throws to give him 27 points on the evening and bring the Tribe within one point, 74-73. After two missed free throws by the Pirates, Cohn wove through the defense to lay the ball in and give the Tribe a 75-74 lead with under three minutes to go. The Pirates had another empty possession before Knight was fouled by Heckstall, who fouled out on the play. Knight made both free throws, bringing him to 14-18 from the charity stripe on the night. On the other end, Knight came up with a huge defensive rebound with just over a minute to play and the College leading by three. Then, Milon sunk two more free throws for the Tribe to give it a two-possession lead, 79-74, for the first time in the contest. After a timeout by the Pirates, they were unable to score, and Knight pulled down another clutch rebound and was immediately fouled. Once again, he knocked down a pair, bringing the lead to seven points with 45 seconds to play. The College continued to make free throws down the stretch and earned a hard-fought victory, 83-76.

[Knight]’s a competitive guy, a great kid and works so hard at improving his game. I’m glad to see him wearing a Tribe uniform.”

The Tribe was led to victory by four people in double-figures. Knight had career highs in both points and rebounds, scoring 31 and grabbing 14 boards. Milon and Cohn chipped in 15 and 10 points respectively, while Pierce added 13 points and nine rebounds, despite early foul trouble.

“The difference in this game and our first was when things did not go well, we held our ground, we showed some grit, we showed some toughness to keep battling,” Shaver said.

The College will hit the road on Saturday to take on Central Florida in Orlando, before returning home for three straight against Shenandoah, Old Dominion and Marshall.