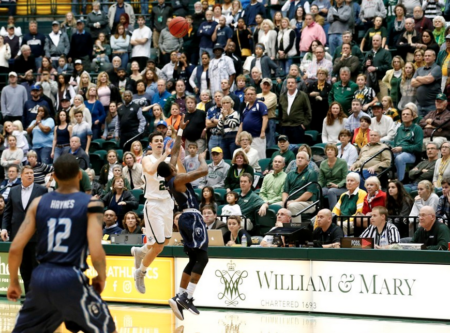 After a dominating 103-54 victory at home against Shenandoah earlier in the week, William and Mary welcomed in-state rival Old Dominion to Kaplan Arena for a Saturday night matchup. The College was able to steal a 79-77 victory in a tightly contested game, thanks to some late-game heroics from senior guard Oliver Tot. The Tribe was led in scoring by senior guard David Cohn. Sophomore forward Justin Pierce also helped to secure the victory with a double-double.

The Monarchs (4-2) opened the game shooting well, but two early three-pointers helped the College (3-2) keep pace. Pierce started the scoring for the Tribe with a three-pointer to cut ODU’s early lead to 4-3. Less than a minute later, with 17 minutes, 28 seconds remaining in the first half, senior guard Connor Burchfield followed suit, hitting a three of his own to tie the game at six.

The Tribe took its first lead of the game, 8-6, on a layup by sophomore forward Nathan Knight. The Monarchs immediately tied the score, but Knight countered with another layup to give the College a 10-8 advantage with 16:25 left in the half.

Cohn and Burchfield hit threes on back-to-back possessions to push the Tribe to a 16-10 lead. Burchfield finished with 10 points and three assists in 31 minutes of action for the College. The six-point advantage would prove to be the College’s largest of the game.

The Monarchs answered with a 10-point run to regain the lead, which they would not relinquish for the remainder of the first half. The run featured eight points scored in the paint, where the Monarchs dominated the undersized Tribe. For the game, ODU outscored the College 46-22 in the painted area. Monarch guard B.J. Stith had four of the 10 points during the scoring run, part of his game-high 26 points on the night.

The College was able to respond and tie the game at 20 with just over seven minutes remaining in the half on a dunk by Pierce. However, the Monarchs responded with an 8-0 spurt, giving them a 28-20 advantage with 4:35 to play until halftime. Stith gave ODU their largest lead of the game with just over a minute left in the half, 34-25. Pierce responded with two points of his own to cut the lead to seven. The College was unable to convert on its last shot of the half and went to the locker room trailing 34-27.

Neither team was able to take control early in the second half. With just over 13 minutes remaining in the game, Pierce hit another three to cut the Monarchs’ lead to 46-43, the first time the Tribe had been within one possession in the second half. Pierce finished with 15 points and 10 rebounds for the game, recording a double-double in the College’s comeback victory.

Around the midway point of the second period, Knight scored four straight for the Tribe. However, the College still had not held a lead in the second half. Knight contributed 14 points in 27 minutes but saw somewhat limited action due to foul trouble throughout the game.

The College trailed 54-51 with nine minutes left before it went on a 9-0 run to reclaim the lead. Sophomore guard Matt Milon drained a three-pointer to tie the game at 54 before giving the College its first lead of the second half, 57-54, with another three with 7:28 to play.

As the clock ticked under six minutes, the Monarchs answered with two threes of their own to tie the game at 60 with 5:21 left. With four minutes remaining, Cohn hit a three to give the Tribe the lead again, 65-62. Cohn was deadly from three for the game, converting on five of his six attempts, accounting for 15 of his 25 points. ODU briefly took the lead back with 2:21 to play before Cohn responded with another three to give the College a 71-69 advantage at the two-minute mark.

The College shot just under 75 percent in the second half, scoring 52 points on just 23 shots. Cohn’s three was answered at the other end by Stith, who drained one of his own to give the Monarchs a one-point lead with 1:35 remaining in the game. The two teams traded buckets before Cohn knocked down two clutch free throws to put the Tribe on top 76-75 with 44 seconds remaining.

Cohn lost a costly turnover with just under 10 seconds to play, allowing the Monarchs to score the go-ahead basket with just 1.5 seconds left. Trailing 77-76, Pierce took the ball to inbound for the Tribe. He passed the ball to Tot, who took one dribble along the left sideline and launched a desperation half-court shot. Tot’s shot fell through the net as the buzzer sounded. He had not scored all game, but he made a half-court buzzer beater to give the College a dramatic 79-77 home victory.

The College looks to stretch its winning streak to three games when it takes on Marshall at home Wednesday. The Tribe will then travel to Savannah State over the weekend to start a three-game road trip.