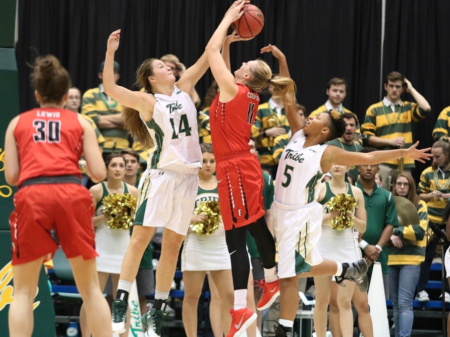 After an overtime triumph against East Carolina earlier in the week, William and Mary claimed another victory 70-49 over Loyola Saturday at Kaplan Arena. The College jumped out to a quick advantage and did not look back, leading from start to finish. The Tribe was paced by a balanced scoring effort, with four players — sophomore forward Victoria Reynolds, junior guard Bianca Boggs, senior guard Jenna Green and senior center Abby Rendle — finishing in double figures.

The College (4-1) quickly took a commanding lead in the first quarter. Boggs made a layup just eight seconds into the game off an assist from Green. Green also assisted on freshman guard Nyla Pollard’s three-pointer to stretch the lead to 5-0. Rendle made a layup with 8 minutes, 9 seconds to play in the quarter to cap the 7-0 start for the Tribe. The Greyhounds (2-4) scored five of the next seven points to cut the College’s advantage to 9-5 with 6:36 remaining. The four-point deficit would be the closest the Greyhounds would get to the Tribe for the rest of the game.

The College stretched its lead to double-digits with a 10-0 run in the middle of the quarter. Boggs scored five points, including her first three-pointer of the game, as a part of the College’s scoring run. Junior guard Misha Jones drained a three of her own to cap the 10-0 spurt and give the College a 19-5 lead with just over two minutes left in the quarter. The Tribe maintained its 14-point lead until the end of the quarter, leading 22-8 at the conclusion of the first 10 minutes.

The College continued to increase its lead in the second quarter. With just over six minutes remaining in the half, Green nailed a three-pointer to give the Tribe a 32-12 lead. The three was part of Green’s balanced effort of 10 points, seven assists and three rebounds. The next eight Tribe points all came from sophomore guard Nari Garner. She spurred the Tribe to its largest lead thus far, 34-12, with a jumper with just under five minutes to play in the quarter.

After the Greyhounds scored, Garner answered by reestablishing the College’s 22-point lead with another jumper. She added another four points for the Tribe later in the quarter with two breakaway layups, the latter putting the Tribe up 40-17 with 1:19 remaining in the half. Garner finished with eight points in just 16 minutes of action. At the half, the College doubled up the Greyhounds, 42-21.

The Greyhounds opened the third quarter with a scoring run of their own, a 9-2 spurt to cut the College’s lead to 44-30. Loyola guard Molly Taylor drilled a three-pointer to get within 16 points, before guard CaLee Gelbaugh added a jumper to make the score 44-30 with just over seven minutes remaining in the quarter.

Barely over a minute later, the College reestablished an 18-point lead after Rendle drained a short jumper. Rendle was one rebound short of a double-double for the game, contributing 10 points and nine boards. The Greyhounds cut the deficit to 14 once more, but the College responded again. Reynolds hit a three-pointer with four minutes left in the quarter to push the lead to 20 again, 56-36. Reynolds had 13 points to lead the Tribe and pitched in seven rebounds.

The Tribe and the Greyhounds went to the fourth quarter with the College leading 62-41. Each team only managed to score eight points in the final 10 minutes. The College was able to give some of its substitutes more minutes with a large lead and the game essentially decided. Freshmen guards Libby Underwood and Bailey Eichner each made a free throw in the fourth quarter for the College, as the Tribe cruised to a 70-49 victory over the Greyhounds.

The Tribe will look to improve on its 4-1 record with a busy schedule this week. Monday, the College will welcome Davidson to Kaplan Arena for another non-conference matchup. The Tribe will then travel to in-state rival Richmond for a Wednesday afternoon game. The College will finish the week with another road test Saturday in Pennsylvania against St. Francis.