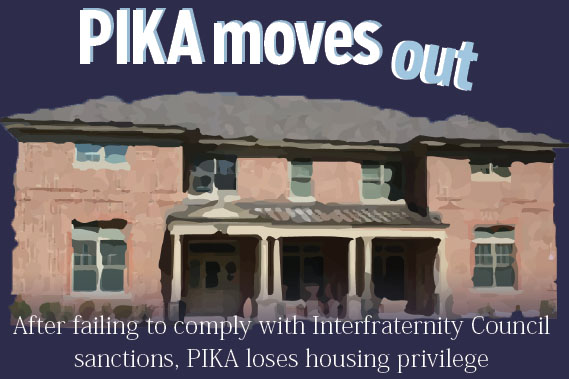 Last semester, the Gamma chapter of Pi Kappa Alpha Fraternity hosted their annual “camo” party, which in previous years had been referred to as a “Vietnam” party, allegedly commemorating fraternity members who were preparing to leave the College of William and Mary to fight in the Vietnam War.

Following the party, which President Owen Fish ’19 said the fraternity had tried to disassociate from past offensive behaviors, the Asian American Student Initiative released a petition signed by other student organizations and academic departments that condemned the party and called for the fraternity to apologize for culturally insensitive decorations and the Vietnam theme. At the end of the academic year, the Gamma chapter released an apology.

At the same time, the fraternity was sanctioned by the Interfraternity Council for having open alcohol at their event. These sanctions included limited social probation — the fraternity could only host three social events during the fall 2017 semester. In addition, the chapter had to go through two informational sessions. One, which was titled “The Ladder of Risk,” was completed by the chapter Sept. 3. The second, which focused on cultural sensitivity and was hosted by Associate Director of the Center for Student Diversity Roxie Patton, was held in early September as well.

Fish and PIKA Internal Vice President Ryan Walter ’20 said that although they believed that the second informational session went well, they were later contacted by Patton, who said they failed to complete the session and demonstrated disruptive behavior. The chapter was required to have at least 85 percent of their members in attendance at the on-campus fraternity house for this informational session, which Fish and Walter said had happened. However, toward the end of the session, they said one member muttered an expletive aimed at Patton, but other fraternity members were quick to correct him.

The [information session] was on how we could avoid the issues that got us punished in the spring,” Walter said.

“The [information session] was on how we could avoid the issues that got us punished in the spring,” Walter said. “We were enthusiastic to learn what she had to say and really happy that she was open to our questions.”

Walter and Fish said that they appreciated how Patton encouraged chapter members to share their opinions on what had happened and on the material that she was presenting. They also said that approximately half of her presentation was focused on specific issues pertaining to the “camo” or “Vietnam” party.

When Adam Illowsky ’18, who was serving as PIKA’s president at the time, received a notice from Patton informing him that the fraternity was being charged with disruptive behavior at the second session, which meant they had failed to complete their sanctions from the spring, he began an appeals process through the IFC that was later picked up by Associate Dean of Students Dave Gilbert.

“Adam filed an appeal with the IFC Conduct Board, Gilbert took it from there, and we had an informal hearing with Dean Gilbert on October 25,” Fish said. “We were some of the witnesses called, he asked us questions, and we answered them honestly, and he asked us questions based off of [Patton’s] testimony. He told Adam that he would hear back about the informal hearing within one week. On November 2, he got an email saying that we had sanctions because of disruptive conduct.”

These sanctions, which are in place beginning at the end of the fall 2017 semester, include losing on-campus housing privileges. According to Associate Director of Student Leadership Development Joe Wheeless, Residence Life is working with fraternity members who are living in the on-campus house to relocate them for the spring semester. The process began earlier in the fall, when the sanctions were first issued, but by the start of next semester, the house will be vacant of PIKA members.

The other sanctions, which were imposed on the fraternity for failing to complete the spring 2017 sanctions, include that the fraternity is not allowed to participate in spring recruitment, that each member must complete a mandatory five hours of community service, that the chapter is unable to participate in any on-campus activities such as intramural sports events, that the chapter is unable to host social or philanthropy events, and that the fraternity’s national organization has been called in for membership review.

Fish said that he disagrees with the severity of the sanctions for the crimes the fraternity was charged with, and said that he did not agree with the loss of recruitment privileges as a punishment because he said he does not believe that it promotes healthy growth for the chapter. Those sanctions, which will be in place for the duration of next semester, will gradually lessen throughout the next fall.

The fraternity will still not have on-campus housing privileges, but they will be allowed to hold fall recruitment and host three social events. Beyond this, Fish and Walter said the fraternity’s activities will return to normal in the fall.

Their housing privileges will not automatically return. According to Wheeless, if the fraternity continues to comply with sanctions, they will be eligible to turn in a roster of members who would be living in the house for the 2019-20 academic year, but their submission of such a roster does not guarantee that they will receive an on-campus fraternity house. They will also not automatically get their house back during this academic year, but they would have the opportunity to move into a house if a vacancy occurs. According to Wheeless, there are fraternities eligible for on-campus housing that haven’t received it for a few academic years because there has not been a vacancy, such as Sigma Chi Fraternity.

Although the fraternity will lose their on-campus house for an indefinite period of time, Fish and Walter said that the chapter is continuing to move forward, and that they believe the lessons Patton intended to share with them were learned and appreciated by chapter members. Following the Nov. 2 notice that Illowsky’s appeal had been denied, the chapter held a vote-of-no-confidence election and re-elected an entirely new executive board. It was at this meeting that both Fish and Walter received their current positions. They said that they believe this meeting is evidence that they are committed to showing the community and College administration that they want to grow and change their image.

Every single one of us wakes up with a smile on our face because we still have each other,” Walter said.

“Every single one of us wakes up with a smile on our face because we still have each other,” Walter said. “We will fulfill the sanctions against us and keep moving forward. PIKA has the closest bonds as friends, and we want to prove that to the community and to the school because we want to be better in the eyes of the school.”

Walter and Fish said that they know the chapter has been in need of “soul-searching” over the last few years, but that they were working on it on their own. Due to the sanctions, however, the College mandated this soul-searching before the chapter could finish it themselves.

“The presentation really was informative, and we learned a lot. We want to make clear that we learned the lesson Ms. Patton was sent to teach us,” Walter said.