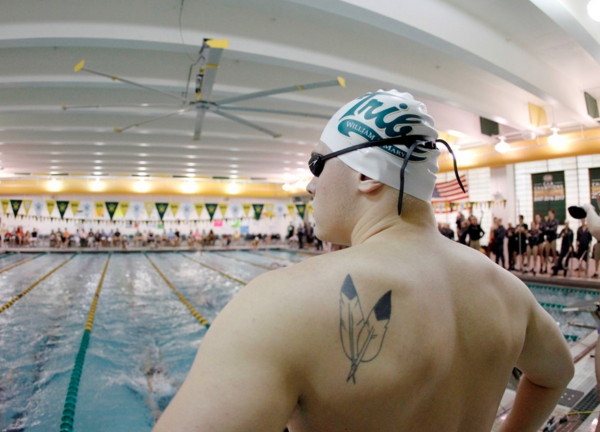 William and Mary traveled to Princeton, New Jersey to compete in the Big Al Invitational this weekend. The women placed fourth of 10 with 444 points in the Sunday finals while the men placed fifth of eight with 423 points.

Friday, the women came in third of nine in the prelims with a score of 106, behind Brown with 266 points and Villanova with 178. Freshman Megan Bull broke the Tribe’s freshman record in the 500 free with a time of 4:51.05. Bull’s performance secured her second place and a spot in the championship finals, where she came in eighth place with a time of 4:59.25.

22 swimmers advanced to the Saturday finals, including Bull with a 4:23.38 in the 400 IM, the eighth-fastest time in Tribe history. Freshman Tara Tiernan was the only swimmer to qualify for the 200 free with a time of 1:51.57 in the prelims; Tiernan finished 15th in the finals with a slightly better time at 1:51.31.

In the Saturday finals of the invitational, Bull placed fourth in the 400 IM with a time of 4:25.42. Junior Morgan Smith was right behind her in fifth place with a time of 4:26.08. In the 100 fly, senior Abby Mack finished in seventh in 55.33. Junior Maria Oceguera improved to 10th in Tribe history after cutting her time down to 55.75, taking 18th in the competition. The College finished fifth in the 800 free relay with Bull, junior Morgan Smith, Oceguera and Tiernan with an overall time of 7:26.38.

Sunday night, Bull’s 16:54.74 in the 1,650 free earned her a bronze medal in this event. Sophomore Norah Hunt placed fifth in the same event in 17:01.56, a personal best with a 1,000 free split that ranked 10th in Tribe history. Smith finished in eighth with a time of 17:12.16. Tiernan came in 12th in the 200 back in 2:02.04. Senior Shannon Harrington posted a lifetime best in the 200 breast with a time of 2:16.15, earning her third place in the finals. Harrington’s performance tied for fifth best in Tribe history. Bull took eighth in the event in 2:23.84. Oceguera came in third place in the 200 fly with a lifetime best performance of 2:00.13. This marked the College’s third bronze medal finish in the invitational.

Friday, the men started off strong for the College as well, coming in fourth of eight with 96 points. The Tribe trailed behind Princeton (310), Brown (147) and Columbia (100). Sophomore Ben Skopic came in sixth in the 200 IM with a time of 1:49.86. Skopic’s performance marked the College’s first championship final of the day. Sophomore Colin Wright was the second seed with a time of 20.38 in the 50 free. Wright’s performance was the 13th fastest in Tribe history.

The Tribe jumped to third of eight with 151 points to conclude the Friday finals, only 10 points behind Brown. The College came in third overall in the 200 free relay in 1:20.93 with sophomore Ian Thompson, Wright, sophomore Jack Doherty and senior Kyle Neri. Junior Carter Kale completed the 500 free in the fasted Colonial Athletic Association time thus far, coming in 19th place in 4:30.65. Sophomore Chris Balbo finished in 4:32.05 for 20th place, right behind Kale. The team of sophomore Colin Demers, junior Brooks Peterson, Thompson and Neri took sixth in the 400 medley relay with a time of 3:20.23. The team’s performance marked the 10th fastest time in Tribe history. Senior Wyatt Grubb, freshman Devin McNulty, Doherty and Wright placed eighth, right behind their teammates, in 3:20.42.

The conclusion of the Saturday prelims knocked the Tribe back to fifth, where it stayed through the Saturday finals. Demers, McNulty, Doherty and Thompson completed the 200 medley relay in 1:28.99, finishing fourth overall and securing the fifth fastest time in Tribe history. Balbo took seventh place in the 400 IM, followed by Skopic in 10th place with times of 3:56.74 and 3:57.28, respectively. McNulty stole third place in the 100 breast with a time of 54.97, breaking the previous freshman record of 55.11 set in 2014 by Josh Zimmt `17.

The College’s next meet, a tri-meet, will take place Jan. 4 in Boca Raton, Florida.