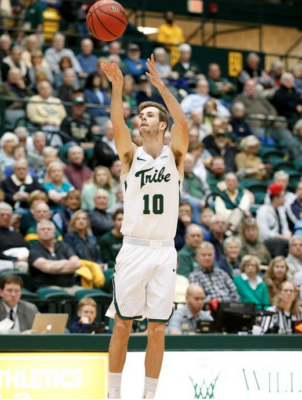 William and Mary continued its non-conference schedule last week with two games. The Tribe first took on Marshall at home before traveling to Savannah State Saturday. The College won both games with offensive outbursts, scoring over 100 points in both games to increase its win streak to four.

Wednesday, the Tribe (5-2) welcomed the Thundering Herd (5-3) to Kaplan Arena. Sophomore forward Nathan Knight opened the scoring for the Tribe just over a minute into the game, with a jumper to tie the contest at two. After giving up four straight points, senior guard Connor Burchfield drilled his first three of the night to cut the deficit to 6-5. A dunk by Knight, off a pass from senior guard David Cohn, just seconds later gave the College its first lead of the game, 7-6. The Tribe fell behind again before Burchfield added his second three of the night. He added his third a few minutes later to give the College a 17-13 advantage with 13:39 to play in the first half. In an early, back-and-forth affair, Knight put the Tribe back up 21-20 with a layup at the 12-minute mark. Knight finished as the Tribe’s leading scorer, with 31 points, 22 of which came in the second half, and 12 rebounds.

“I was looking to score,” Knight said. “It was just my teammates looking for me.”

The College kept up its hot shooting from deep midway through the first as junior forward Paul Rowley knocked down back-to-back threes giving the Tribe a six-point advantage over the Thundering Herd. Sophomore guard Matt Milon added another triple and Cohn banked home a layup to extend the lead to 34-23 with 8:32 to play before the half. However, Marshall responded with six-straight points. Burchfield added another three to get the lead back to eight for the Tribe. Layups by Cohn and sophomore forward Justin Pierce gave the College a double-digit lead once again. Pierce finished with 12 points, seven rebounds and five assists in 35 minutes. He was one of five players for the College in double-figures for the game. The College’s advantage did not last long as the Thundering Herd responded with another scoring run, this time a 10-0 spurt to tie the game at the 4:23 mark of the first half. Three-pointers from Cohn, Burchfield and Milon late in the period allowed the College to take a 51-44 lead to the locker room. Milon also finished in double-digits with 15 points.

The hot shooting for both teams did not dip in the second half. However, the Tribe started off slowly, allowing the Thundering Herd to take a lead. The Thundering Herd tied the contest at 59 in the first few minutes of the second half and took a 62-59 lead on a three from guard Jon Elmore. Elmore played the entire game and led the Herd with a game-high 32 points. Marshall scored 20 points in the first five minutes of the second-half. The College still trailed as the clock ticked below the 10-minute mark and the Herd extended their lead to 77-69. However, Burchfield caught fire once again, making his sixth, seventh and eighth threes of the game within 49 seconds. The eighth three, assisted by Cohn, gave the College a 78-77 lead. The Herd did not lead for the rest of the game.

“Obviously Connor Burchfield was great tonight,” head coach Tony Shaver said. “I’m so happy for him and proud of him. … He stuck it out and [I’m] just so thrilled for him.”

“After seeing one or two go in, the basket starts to look a little bit bigger,” Burchfield said. “I’m pretty sure all 10 of them were off of passes by my teammates, so they were looking for me when I was open. … I was fortunate enough to knock them down tonight.”

The Thundering Herd worked the deficit back to four points a couple times, but each time the Tribe was able to respond. The College finished the game strong, as Cohn hit a three with 11 seconds left. Cohn finished with a double-double of 20 points and 13 assists and the Tribe won a shootout, 114-104. The College shot over 60 percent from the field and over 64 percent from three.

“In three of our wins here at home, against really quality teams, we have gotten down at key spots in the ballgame and showed the resiliency to keep playing and keep working,” Shaver said.

The Tribe opened its three-game road trip with a matchup against Savannah State. The College picked up where it left off against Marshall, getting off to a quick start against the Tigers. Pierce opened the scoring with a layup before Burchfield and Milon hit threes to give the Tribe an 8-3 advantage just two minutes into the game. Milon hit his second three of the game a couple minutes later to get the lead back to five. Burchfield followed with his second and third threes of the game to give the College a 17-9 lead at the 13:41 mark of the first half. Burchfield finished 5-9 from three and led the College with a game-high 27 points. The Tigers fought back within three before Burchfield hit his fourth shot from long distance in the early-going.

After Burchfield went to the bench, Knight and Pierce stepped up to keep the Tribe in front. Within 50 seconds, Knight converted on two dunks and Pierce added another to give the College a 26-20 lead at the halfway point of the first half. Later, Milon and Rowley hit threes a minute apart from each to give the College a commanding 38-24 lead with 7:24 to play in the half. Milon finished 4-7 from behind the arc and scored 18 points for the College. He also contributed five rebounds. Rowley added another three a minute later to give the Tribe a 16-point advantage. The Tigers worked the lead back down under 10 before Pierce drained a three with less than two minutes to play before the half. Another dunk from Knight punctuated the half with the College leading 54-42. Knight contributed 18 points, 12 rebounds and 7 blocks.

Milon and Burchfield picked up where they left off in the second half, hitting baskets on the Tribe’s first possession to push the lead back to 16. The Tigers refused to go away and cut the deficit to nine again, but Knight extended the lead back to 12 after a layup and a free throw with just over 16 minutes remaining. The Tigers were unable to whittle their deficit into single-digits for the rest of the contest. The lead was back up to 17 just over a minute later after Justin Pierce hit a three. Pierce had a monster night with a double-double from 21 points and 17 rebounds. Rowley, who was 3-5 from three for the game, hit his third triple with 10:42 remaining, giving the Tribe its first 20-point lead of the day.

The College took its largest lead of the game with 7:24 to play off of two Cohn free throws that gave the Tribe a 91-65 advantage. Cohn finished with a balanced effort including 11 assists, 7 points and 7 rebounds. The Tigers cut the deficit to 18 with just over five minutes to play, but Milon answered with his final three of the game to give the College a 21-point lead. Burchfield added a three-pointer and two layups in the span of four possessions to give the Tribe a 105-82 advantage with 1:56 to play. The College was able to finish the game with a 23-point advantage, winning 108-85 in a game where it never trailed.

The College will finish its three-game road trip with matchups against George Mason and Ohio State this week. The Tribe is looking to extend its four-game winning streak and improve its road record.

“We obviously have a home-court advantage with the atmosphere we have in Kaplan, but as we hit the road … we need to stay mentally focused and sharp,” Burchfield said.

The College will return to Kaplan Arena Dec. 17 when the Tribe takes on Milligan.