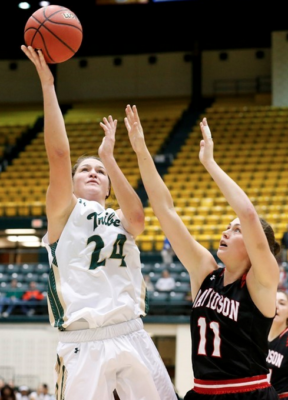 William and Mary opened a busy schedule last week at home against Davidson. The Tribe led from start to finish and cruised to a double-digit win. The Tribe then played two games on the road against Richmond and St. Francis. The College picked up victories in both road matchups, extending its winning streak to five.

Monday, the Tribe (7-1) started quickly against the Wildcats (3-4), with freshman guard Nyla Pollard hitting two baskets in the first minute of the contest. She scored on the opening possession of the game before draining a three off of a pass from senior guard Jenna Green with 9 minutes, 8 seconds to play in the quarter. Pollard had eight points in the opening quarter alone and was one of four players for the Tribe to finish in double figures for the game. Junior guard Bianca Boggs, who also hit an early three, added a layup in transition with 6:30 to play in the quarter to give the College a 14-5 advantage. The Wildcats cut the lead to 19-12 before the Tribe scored the last six points of the quarter. Senior center Abby Rendle and Green each made layups before Boggs added two late free throws to give the College a 25-12 lead at the end of the first quarter.

The Tribe maintained its hot shooting with a quick start to the second quarter. The College went on a 9-3 run to begin the quarter. Boggs had four points during this stretch, and junior guard Misha Jones nailed a three with just over seven minutes to play in the second quarter to give the College a 34-15 advantage.

The Tribe continued to stretch the lead later in the quarter when sophomore guard Nari Garner drained a three of her own with 3:04 to play before the break. Garner’s three gave the College its largest lead of the game: 41-19. She finished the game with 20 points after shooting 5-8 from beyond the three-point line. The Wildcats scored the next five points before Rendle wrapped up the scoring for the half with a layup to give the College a 43-24 halftime advantage.

The third quarter was low-scoring. The College committed 13 of its 19 turnovers after halftime.

“I like our attitude and our attack-mode, so I don’t want to change that … but we do have to take care of the ball a little better,” head coach Ed Swanson said.

After Green made a jumper with just over four minutes to play in the quarter to give the College a 22-point advantage again, the Wildcats scored seven consecutive points to cut the deficit to 52-37. However, Rendle scored in the last minute of the quarter to extend the lead back to 17.

The fourth quarter was highlighted by the individual performances of Garner and Rendle. Garner drained a three to start the quarter and give the College a 20-point advantage again. She would go on to score 17 of her 20 points in the fourth quarter, including four threes in that time period.

The only other player to score in the quarter for the College was Rendle, who made a layup. She finished with a double-double on 18 points and 11 rebounds. She also added four blocks. On her fourth block, with 4:39 to play in the game, Rendle set a school record for career blocks — it was the 256th block of her career.

“I didn’t really know I was that close to it, so it’s exciting,” Rendle said about the record.

The College then traveled to Richmond for a Wednesday afternoon contest against the Spiders (5-5). The College got off to a slow start, scoring only 10 points in the first quarter. Early baskets by Rendle and sophomore forward Victoria Reynolds gave the Tribe a brief, early advantage, but the Spiders responded with 16 of the next 22 points. Richmond guard Micaela Parson had five of the first eight points for the Spiders and finished with a game-high 21 points. Boggs made a basket and hit two free throws in the middle of the quarter to keep the game close.

The Spiders scored the next six points to take a 10-point lead, 18-8, with just over a minute to play in the first quarter. Green scored for the first time in the contest to cut the deficit to eight at the end of the opening quarter. The College responded in the following frame, scoring 25 points and taking the lead before halftime. Still trailing 21-14 with under six minutes to play in the second quarter, the College hit three three-pointers in just over two minutes to tie the game for the first time since it was 2-2. Reynolds hit a three before Garner continued her hot shooting with two of her own to tie the game at 23 with 3:38 to play before halftime.

Both Reynolds and Garner finished with 18 points, leading the Tribe. Reynolds added nine rebounds, and Garner made five threes for the second consecutive contest. With 2:19 to play in the half, Reynolds hit another three to give the College a 28-27 advantage, its first lead since the opening minutes. Garner added five more points before the end of the quarter, and the College took a 35-32 lead to the locker room.

The College cooled off in the third but still maintained a slim lead throughout the quarter. After the Spiders had clawed to within one point, Reynolds scored and Pollard made two layups to give the Tribe its biggest lead thus far, 39-34 with 7:34 to play in the quarter. Rendle made her second consecutive layup, this time off of an assist from Pollard, to give the College a six-point lead before Parson knocked down a three to cut the Spiders’ deficit to 43-40.

Rendle finished with another strong effort, this time with 14 points, seven boards and seven blocks. With just over a minute to play in the quarter, Reynolds made another layup to stretch the lead to seven. At the end of the third, the College led 49-44.

The Tribe dominated the fourth quarter, with the Spiders scoring several points in garbage time to make the game look closer than it was. In the first five minutes of the quarter, the College went on a 17-5 run that secured its victory. After Green made a three with just under two minutes left, the Tribe led 75-54. Green finished with 12 points and seven assists. The Spiders scored 10 points in the last two minutes, but the College still claimed a double-digit victory, 78-64, for its fourth-straight win.

The Tribe concluded its busy week with a second road game, this time at St. Francis (3-4). Once again, the College fell behind early but was able to come back for a victory in a tightly contested game. Trailing 9-5 with 6:20 to play in the first quarter, Boggs got a steal and made a layup and a free throw to cut the Tribe’s deficit to 9-8. Boggs finished the game with 33 points, a career high.

The College led 15-14 midway through the quarter, but the Red Flash went on an 11-2 run to end the quarter with an eight-point lead. With 8:16 to play before half, the Tribe faced its largest deficit of the game at 30-21. However, Boggs, Reynolds and Reynolds each made a basket in just over a minute to cut the deficit to three. Reynolds had her second consecutive game scoring over 18 points, finishing with 22 points and seven rebounds. The Red Flash extended the lead back to nine points with just under three minutes until half, but the Tribe bounced back again to trail by just two, 43-41, at the half.

With 7:43 to play in the third quarter, Boggs hit a three to tie the game at 46. Then, Reynolds made two consecutive baskets to give the College its first lead since the first quarter, 50-49, with just over six minutes to play in the quarter. The Red Flash fought back again and went on a 12-5 run to take a 61-55 advantage late in the third quarter. Boggs scored the last five points of the quarter, but the College still trailed 70-66 going into the last 10 minutes. Green cut the deficit to one early in the fourth quarter after a basket and a free throw.

Green finished with 13 points and six boards. The Tribe took the lead for good on two free throws by Reynolds with just over six minutes to play. The College finished with six straight free throws after the Red Flash had cut the deficit to 86-82. Garner knocked down the last two to seal the Tribe’s 92-86 come-from-behind win.

“It’s still early in the season, but we still have to grow and try to put 40 strong minutes together,” Swanson said.

The College will have a three-game homestand to end its non-conference schedule. The Tribe will look to extend its winning streak to six games when it takes on South Carolina Upstate December 5 at Kaplan Arena. The College will finish up non-conference play with home games against in-state foes Old Dominion and Norfolk State.