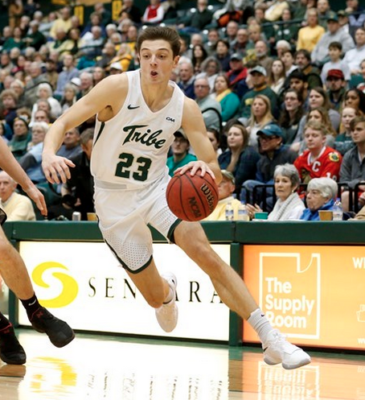 After Towson handed the Tribe its first loss of Colonial Athletic Association play, the College looked to bounce back against Northeastern at home Thursday. The Tribe trailed for almost the entire game and suffered its second consecutive loss, 90-70, at Kaplan Arena. The College dropped to 7-2 at home on the season after only losing one game at home last season.

“Effort has been inconsistent lately, and the same can be said about our team chemistry,” senior guard Connor Burchfield said.

The Huskies (12-7, 5-2 CAA) had a couple of chances to take an early lead at the free throw line in the first minute, but only made one of four attempts, and the College (13-6, 6-2 CAA) took a 2-1 lead on a layup by sophomore forward Justin Pierce. The game between two of the top teams in the conference stayed close until right before the midway point of the first half. Pierce made two free throws with just over 12 minutes remaining in the half to cut the Huskies’ lead to 15-13. The Huskies responded with a quick 12-0 run in just over two minutes. They made four consecutive threes to extend their lead to 27-13 with 10 minutes to play in the half. Guards Bolden Brace and Vasa Pusica each made two three pointers during the run. Pusica was on fire in the first half, scoring 18 points in the opening 20 minutes.

“Runs like that kill our chances, because as long as we keep it close, we know we’ll have a shot with the way we shoot the ball,” Pierce said.

A three by Pierce ended the run, but the College continued to fall further behind. With six minutes to play in the half, the Huskies pushed their advantage to 19. Six consecutive points by Burchfield at the end of the half cut the Tribe’s deficit to 47-34 at the break.

Burchfield continued his hot shooting at the start of the second half, making another three at the 18-minute mark to cut the gap to 12 points. However, the Huskies responded with their second 12-0 run of the game, putting the game almost certainly out of reach for the College with 15 minutes remaining in the game. The Huskies took their largest lead of the game a minute later, 66-40. Over the next four minutes, the Tribe managed to cut the lead back to 16 after a free throw by sophomore forward Nathan Knight. The Huskies, who shot over 70 percent from the field for the game, responded with five consecutive points courtesy of Brace.

For the rest of the game, the College never threatened to come back and suffered its second consecutive loss after starting out 5-0 in conference. With the loss, the Tribe fell into a tie for first place in the CAA. The Huskies were paced by Pusica’s 20 points and nine assists. As a team, they were a scorching 12-19 from three. The College had four starters (Knight, Pierce, Burchfield and sophomore guard Matt Milon) in double figures, but 13 turnovers and only 11 assists as a team. It also only shot 29 percent from three.

“Every season has its ups and downs, its ebbs and flows, but we’ve got to find a way to find our spirit again,” head coach Tony Shaver said.

After back-to-back losses at home, the College hit the road for three straight conference matchups. The first game of the road trip was against Elon. The College staged a comeback in the last few minutes to claim an 80-73 victory in a closely contested game.

Both teams started out slow, but Burchfield had a strong start with seven early points to give the College a 9-5 advantage with 14 minutes to play in the first half. The Phoenix (12-9, 4-4 CAA) tied the game at nine before Burchfield swung the ball to Milon, who drilled a three of his own to give the College a 12-9 edge with 12 minutes to play in the half. Milon hit another three a minute later to break yet another tie. He finished 3-8 from behind the arc and chipped in 13 points for the College. Later in the half, Burchfield made his second three of the game to stretch the Tribe’s lead to 27-22 with just under five minutes to play. Senior guard David Cohn got in on the three-point barrage when he drained a three on a fast break with just under two minutes to play in the half. Cohn’s three gave the College its largest lead thus far, 36-29. However, the Phoenix closed the half with five consecutive points. Burchfield exploded for 14 points in the first half for the College to help the Tribe take a slim advantage, 36-34, to the locker room.

The Phoenix struck first in the second half to tie the game at 36, but Cohn and Pierce quieted the crowd with back-to-back triples to push the advantage back to six. Cohn drained two more threes in the next minute to give the College a 48-40 lead. He went 5-7 from three for the game and finished with 16 points and six assists to pace the College. Over the next five minutes, the Phoenix slowly chipped away at the Tribe’s lead and, with under 12 minutes to play, they took their first lead of the game. Forward Brian Dawkins banked home a layup to give the Phoenix a 54-53 edge. Cohn quickly responded with his fifth three of the night to put the College back up. However, with under seven minutes remaining, the Phoenix finished off an 11-2 run with a three by guard Steven Santa Ana. The Tribe suddenly trailed 69-61 and was in danger of dropping its third straight game and falling out of first place in the conference.

However, the College responded immediately. Knight scored five points in a row, including a rare three from the 6-foot-10 forward. His classmate, Pierce, followed it up with a three of his own to tie the game at 69 with over four minutes left to play. Milon made a jumper a minute later and the College regained the lead. After the Phoenix tied the game at 71, Milon and Burchfield each made clutch treys to clinch the comeback victory for the College. The Tribe escaped Elon with a 80-73 victory. The College was led by Burchfield, who scored 19 points on just 10 shots and added a game-high eight rebounds.

The College will have a chance to win its second straight game and stay on top of the CAA standings when it travels to Towson Thursday. At Kaplan Arena Jan. 13, the Tribe will also be looking to seek revenge for the 99-73 shellacking the Tigers handed it. Saturday, the Tribe will wrap up its road trip with a matchup against defending CAA champions North Carolina-Wilmington. The College returns to Williamsburg Feb. 1 for a rematch against Elon.