Home Variety ‘The Grand Duke’ is a grand success 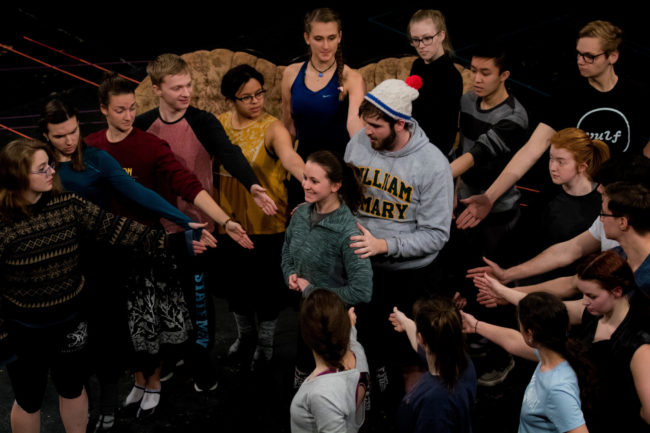 A deadly duel using playing cards, four weddings with the same groom but different brides, and far too many sausage rolls for anyone to stomach, all in the short period of 24 hours. These are the oddly shaped pieces of the plot of “The Grand Duke,” the play put on from January 18-21 by the completely student-run Sinfonicron Light Opera Company.

“The Grand Duke,” also known as “The Statutory Duel,” is the last opera written by the nineteenth century collaborative team of W. S. Gilbert and Arthur Sullivan. Originally set in a German duchy in 1750, the Sinfonicron Light Opera Company brought on Alex Bulova ’19 to adapt the script and make it more engaging for modern audiences, with great success. This edition of the play, directed by Madelaine Foster ’18 and performed at the College of William and Mary, was set in an English duchy in 1898, the very time period in which Gilbert and Sullivan originally wrote and produced their works. The changed gender of the lead character was the most noticeable and intriguing of these alterations. The lead role of Lesleigh, formerly Ludwig in the original, added the little-known background of male impersonators in Victorian England while allowing for a lesbian relationship between two of the lead characters.

Lesleigh, portrayed with great dramatic flair by Catherine Smith ’18, is engaged to Liza, played gracefully by Amy Folkerts ’19. However, they are unable to get married on their wedding day. All of the parsons in the town of Penny-Halfpenny are called to meet with Grand Duke Rupert, played well by Jacob Miller ’18, to discuss his wedding to a baroness. Situations like this are not uncommon with the Duke, and as such, his people despise him. Lesleigh and Liza are also part of an acting company that is plotting to dethrone the Duke and replace him with the company’s manager and substitute the current court with the rest of the company. The signal for being involved in the conspiracy is to eat a sausage roll. Somewhat predictably, Lesleigh misinterprets a regular meal as the signal, revealing the plot to the Duke.

Luckily, the company’s notary, Richardson — who is played by Matt Spears-Heinel ’18, — has a solution. Death expunges all crimes. However, through a statutory duel where cards are drawn instead of guns, the loser can “die” socially and legally, while remaining physically alive. The winner then takes the loser’s place in society. Lesleigh challenges the company manager and the Duke to statutory duels, and both times, she pulls an ace to beat the other party’s king. She then takes on all of their responsibilities — including three separate marital engagements. Hilarity ensues. The cast as a whole was brilliant, handling Gilbert and Sullivan’s typical extravagant style of humor with triumph. Especially successful was Olivia Thomas ’18, who played the ambitious Moira with a perfect balance of intensity and absurdity as well as great vocal skill. Theocles Herrin ’19 was equally hilarious in his performance of company manager Ernest Dalcop, which was both exceptional and reminiscent of British actor Matt Smith. In their scenes together, Thomas and Herrin’s performances built off each other wonderfully.

The series of scenes leading up to the entrance of the Prince of Monte Carlo was especially dazzling. From the completely hysterical performances of Quan Chau ’21, Conor Wilson ’19 and Hope Wright ’18, to the beautiful costumes and false mustaches designed by Erin Wiggins ’19, to the intricate and complicated choreography put together by Andi Nealon ’19, the play was truly delightful. The sets designed by David Garrett ’18, which recreated a quaint English town in the countryside and a beautiful castle with masterful detail, were also impressive. Although the timing of the execution was occasionally a bit slow, the lighting — designed by Chris McDonnell ’18 — was cleverly done, with spotlights indicating characters talking to themselves or to the audience. And in the background of it all was the music and orchestra, directed by Emma Chacon ’18 and played with excellent skill and timing.

Overall, “The Grand Duke” was a grand success. It started strong and kept its stride in the second act, keeping the audience on its toes with ridiculous and delightful shenanigans the entire time. The Sinfonicron Light Opera Company should celebrate its abilities, because — to paraphrase Ernest Dalcop — if one can manage a theatre company this well, one can rule anything.