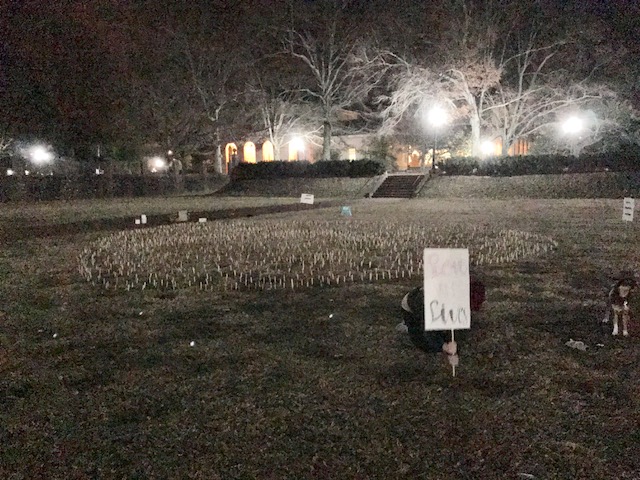 As one of the oldest colleges in America, the College of William and Mary should be a place where people on opposite sides of a divisive issue come together to exchange ideas in pursuit of the truth. Unfortunately, I learned last month that not all students on campus share this time-honored commitment to free speech.

Advocates for Life set up a display of 3,000 popsicle sticks on the Sunken Garden Jan. 21, 2018, to illustrate how many lives are lost each day due to abortion. We wanted to start a conversation on campus about the right to life. Hours after we set up the display, a student tore it down in the dead of night, preventing any conversation from occurring on campus. We are fighting back against the vandalism because this is about something much deeper than destroying 3,000 pieces of wood and ripping up signs. It is about free speech and our right to speak out for the voiceless. We are grateful to the College for supporting our right to free speech.

Seven women put up this pro-life display, and one man took away their voices by tearing it down. We often hear pro-choice women say that men should have no opinion on abortion. But when a man vandalizes a display created by women, some pro-choice women are only too happy to praise him. Apparently what they care about is not the gender of the speaker, but whether that speaker is pro-abortion. The censorship of those advocating for the unborn is unacceptable and must end.

I can empathize with the sentiment that abortion should not be up for debate. I do not believe the right to life for any person, including the pre-born, is up for debate. Yet, there will be no progress in our country on the most controversial issue if we refuse to engage in dialogue. I wish the person who vandalized our display would have engaged in a conversation to learn why I am pro-life instead of destroying a display because he disagreed with the message. He would learn that I am pro-life because I believe women and children deserve better than abortion.

What did the popsicle sticks represent? They represented the millions of lives lost since Roe v. Wade. I say lives because science is clear that from the moment of conception another being with a completely unique DNA has been formed. Without the interference of an abortion, that person would continue to grow into childhood, adolescence and adulthood. Abortion stops the progression from one stage of life to another. I do not believe anybody has a right to stop the life of another person, especially at the most vulnerable stage of development.

Women should not seek freedom at the expense of their children. Women grow up wanting professional and personal success, not abortion. Why do we celebrate a choice she never wanted to make as liberating her? We should be advocating for women by providing real options and support so they never feel compelled to make that choice. I believe in the equality of all people, including women, minorities and the unborn. I also believe that we can achieve equality in society without taking away the life of the unborn. It is a disservice to women to perpetuate the myth that we can only achieve great success if abortion is legal. My achievements, rights and successes do not rest on taking away another person’s fundamental right to life.

Some of the greatest leaders that fought against suppression were pro-life, including Susan B. Anthony, Mahatma Gandhi and Mother Teresa. I feel confident siding with those who are among the greatest civil rights leaders and peacemakers in history. America’s greatest civil rights achievements began with free speech. Our country cannot stand as one of freedom if we do not protect the fundamental rights to speech or life. We will continue to stand for both principles by putting up another display to spread the message that the unborn deserve the right to life.