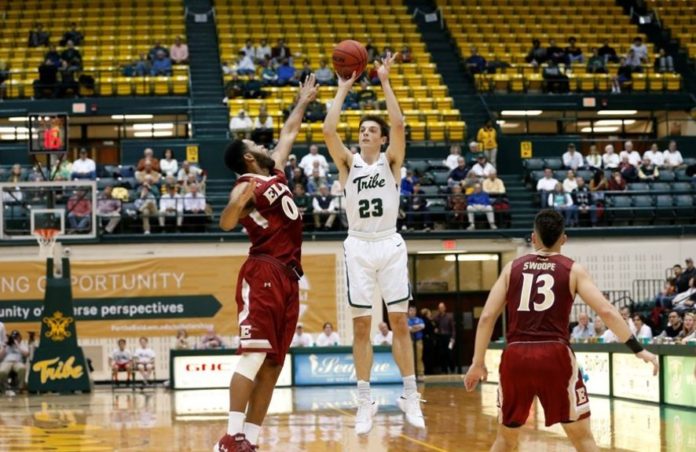 Coming off a narrow victory on the road against UNC-Wilmington Jan. 27, William and Mary took on Elon Thursday night followed by a matchup with Drexel Saturday in two important Colonial Athletic Association contests. The College never trailed in a high-scoring affair against the Phoenix and claimed a 99-92 victory Thursday night at Kaplan Arena. However, the Tribe was unable to extend its winning streak to three, losing to Drexel Saturday afternoon, 91-79.

Thursday, the College (15-8, 8-4 CAA) opened a two-game homestand against the Phoenix (13-11, 5-6 CAA). In its first matchup of the season, the College prevailed in a back-and-forth affair, using a 9-2 run in the final minutes to win 80-73. This time, the Tribe came out quickly with six points in the first 90 seconds from a dunk and two layups. With over 16 minutes to play in the opening half, senior guard Connor Burchfield extended the Tribe’s lead to 9-4 with a three-pointer. His three would be the first of 13 in the game for the College. Three minutes later, with the Tribe clinging to an 11-10 advantage, sophomore forward Justin Pierce scored his first points of the night with a putback dunk off a miss by senior guard David Cohn. Just seconds later, Pierce ripped down a defensive rebound at the other end and then hit a three-pointer in transition to stretch the lead to 16-10. With under seven minutes to play in the first half, Pierce came up big for the Tribe again. This time, he hit two more threes within 22 seconds to push the College’s lead to eight. Three minutes later, junior forward Paul Rowley made a three of his own to extend the College’s advantage to 39-30. Rowley made three treys in the game and finished with 16 points off the bench.

“I took shots when I was open and a lot of them went in,” Rowley said. “I was just glad to help us get it done.”

By the end of the first half, the College had stretched its lead to 52-39.

“Our execution in the first half was high-level,” head coach Tony Shaver said.

Pierce opened the scoring for the Tribe in the second half, slamming home his second dunk of the game with just over 19 minutes remaining. With a little more than 13 minutes to go, the Phoenix had whittled the deficit down to eight, but the College responded with a 10-0 run over the next two minutes. Highlighting the run, Cohn dove on the floor to poke the ball away from Phoenix guard Seth Fuller, and Burchfield scooped up the loose ball and drove to the basket for an easy layup. At the midway point of the second half, Pierce converted on another layup, giving the College a 20-point lead, its largest of the night. However, the Phoenix did not go quietly. They went on a 12-2 run over the next three minutes to cut their deficit in half. Pierce ended the run with a three-pointer, one of his six for the night, giving the College an 83-70 lead with seven minutes to play. Pierce led the Tribe in both scoring and rebounds against the Phoenix, posting a double-double with 30 points and 12 boards.

The Phoenix had one more run in them, scoring eight unanswered points after trailing 87-76 to get within one possession with just over three minutes to go.

Nevertheless, the Tribe responded with a layup by sophomore forward Nathan Knight, who had 20 points for the game, and another three by Pierce to put the game out of reach.

“Nobody panicked, we didn’t try to do anything different,” Rowley said. “We just stuck with it and it worked.”

“Great league win, I’m really happy for the guys and proud of the guys,” Shaver said.

Saturday, the College welcomed Drexel (11-15, 5-7 CAA) to Williamsburg, looking to complete the season sweep of the Dragons. The Dragons came out on fire, taking an early 9-2 advantage after a three by guard Kurk Lee. Pierce and Burchfield answered with threes of their own to bring the College within four, 12-8 with 16 minutes to play in the first half. The Tribe did not take its first lead until there was 11:35 remaining in the opening half, when sophomore guard Matt Milon buried a three to give the College a 20-18 edge. Milon made another three a minute later, pushing the lead to four. The Tribe took a double-digit lead with just over five minutes to play until halftime, when Cohn scored four quick points on a layup and a jumper. However, the Dragons were able to chip away at the lead, and Dragons guard Tramaine Isabell’s three in the last minute of the half cut the Tribe’s lead to 45-40 at the break.

Isabell opened the scoring in the second half to bring the Dragons within one possession, but Burchfield answered with a three-pointer on the fast break. With over 17 minutes left, Knight picked up his third foul and second in a minute of gameplay. He was forced to go to the bench in foul trouble, where he spent a majority of the second half. With Knight out of the game, the College struggled to extend its small lead. He returned with 10:51 to play in the game, the Tribe clinging to a 60-57 edge. Just over a minute later, he was whistled for his fourth foul and returned to the bench.

The Dragons were able to reclaim the lead, 66-64, on a three-pointer by guard Sammy Mojica with 6:22 left in the game. Cohn responded with two free throws to tie the game at 66.

Honored before the game after breaking the school record for assists, Cohn led the Tribe for the game with 26 points and nine assists.

The Tribe was able to briefly grab a 71-70 lead when Milon drained a three-pointer with just over four minutes remaining. The Tribe went cold after that, and Drexel went off on a 13-2 run to seal its upset victory.

The College had 11 turnovers in the second half after not turning the ball over once in the first 20 minutes.

“Our execution on offense was not as good as it needed to be,” Cohn said.

In total, the Dragons outscored the Tribe 21-8 over the last four minutes to hand the College a 91-79 setback.

“We have to play harder on the defensive end,” Shaver said.

“It will be a good opportunity on the road to get back on the same status as them,” Pierce said.

Saturday, the Tribe will return to Kaplan Arena to play Delaware in the annual Gold Rush game. The College routed the Blue Hens in the first matchup of the season, claiming a 25-point victory on the road in early January.