Syndicate is a student-run and student-choreographed hip-hop dance team at the College that was established in 2004.

Syndicate President Kyoko Minamino ’22 and Vice President Salimata Sanfo ’22 started the show with greetings and an introduction to the meaning of the team name.

“It stands for Student Network of Dance and Choreography Technique,” Minamino said. “But we are way more than that … we are definitely a family.”

“This semester’s theme is SYNDI N’ CHILL,’ like ‘Netflix n’ Chill’” Sanfo said. “and we are so happy for you all to see it.”

Syndicate’s new members opened the show with “New(ish)bies” choreographed by Jess Atkinson ’23. Their smooth movements highlighted the beauty of hip-hop dance to the audience. 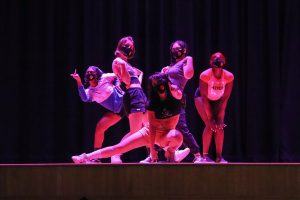 After this piece, the lights went down, and the team’s new members were divided into two groups and entered the stage to perform the next dance – “New Newbies.” Choreographed by Sabina Valery ’20, this dance was set to the tune of “1, 2 Step” by Ciara. While the two groups of dancers first appeared to antagonize one another, they quickly blended together, setting the audience on fire and showing the infinite possibility of hip-hop dance.

Next, the dance “Chopped & Screwed”– set initially to music of the same name by Ludacris – brought the audience a futuristic ambience with the help of cool tone stage lighting. Chopped and screwed also refers to a hip-hop technique which involves intricate hip rolling and moving with a “bum” knee. Later, the stage light was changed to warm tones to fit the music “Jumped Out the Window” by Young Thug.

Many pieces, including “34 + 35” and “No Chill,” were presented following the piece “Chopped & Screwed.” The multiple styles and frequently changing music of the performance offered the audience a perfect audio-visual experience. As a result, the show attracted almost a hundred people to watch the live stream, and the number of views reached 423 only 11 hours later.

Besides their hip-hop dance techniques, Syndicate dancers’ use of chairs also surprised the audience. In the piece “Freak Like Me,” Syndicate members entered the stage from both sides with chairs. Using these chairs, dancers were able to express more complex body movements. 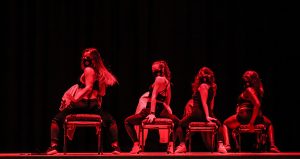 Unlike dancers in “Freak Like Me,” who chose to bring the chairs to the stage at the beginning of the dance, dancers from “No Idea” started while sitting on the chairs. With elbows on knees and their heads looking at the ground, the dancers created a gesture that matched the lyrics “I don’t know” perfectly.

One can easily see how versatile and colorful hip-hop dance can be even just through the two pieces of chair dances performed by Syndicate members.

The 50-minute showcase came to an end with the finale set to the music “Holding Out For A Hero.” Starting with a solo dance, Syndicate members then surprised the audience by switching to group dances in which previous dancers entered and then exited the stage.

Though the showcase was held online, Syndicate members fully displayed the capacity and strength of hip-hop dance to the audience. The various dance forms and music of the performance ensure that the show is eye-catching for the audience with different tastes.

For Hunter Hullinger ’23, the piece “No Chill” won his heart.

“Nothing can top live Syndicate performances because the energy they have as a group is so invigorating to experience in person,” Hullinger said. “But I thought they did a really great job online considering that they weren’t dancing to a live audience.” 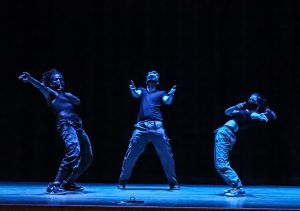 Hullinger also noted that despite difficulties caused by the pandemic, the Syndicate showcase still impressed.

“I was psyched to see the show because I know they’ve had some obstacles practicing this semester and I was glad that they were able to get this done,” Hullinger added. “There’s not a lot of positive stuff happening on campus this semester, so it was nice to have this fall so close to finals.”

Jasmine Garnes ’20 also echoed these sentiments, noting that the showcase impressed even on YouTube.

“I think they all did a great job accommodating the virtual setting and it was really well done,” Garnes said. “I think the only feedback I would have is putting the performers at the beginning, so we know who to expect coming up!”

While the virtual format imposed many challenges to Syndicate members, they successfully overcame these hardships through smooth transitions between different pieces of dance, the skillful use of stage lighting and the organic combination of dance and music. For students who become interested in hip-hop dance and Syndicate after watching this show, Syndicate has auditions at the beginning of every semester and no formal dance experience is required.