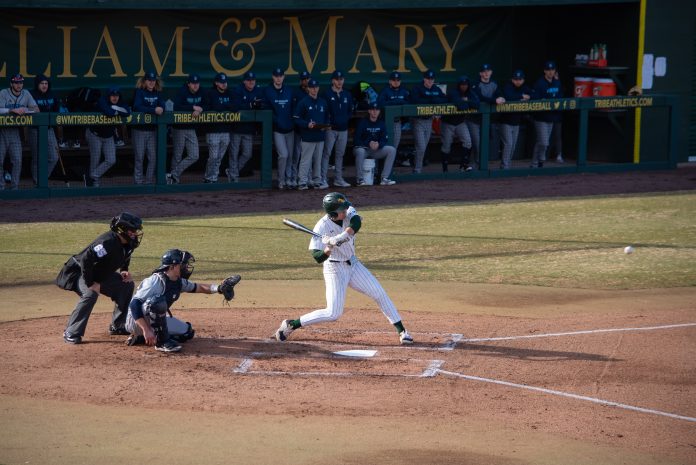 William and Mary (3-0) had a great weekend on the diamond to start its 2022 season against Rhode Island, knocking off the Rams 10-3, 15-8, and 10-5 to complete the sweep and enjoy an undefeated coming out party for new coach Mike McRae.

In the opening game, the Tribe gained its first lead after runs from junior infielder Ben Williamson and senior pitcher/outfielder Jack Cone, which were driven in by a hit by pitch by senior utility player Matt Thomas and a sacrifice fly from junior infielder Mark Trotta. These highlights made it 2-1 after the first inning and another two runs in the second and sixth innings left a close 4-1 spread after six.

The College then blew the game wide open with a grand slam from Cone, scoring six runs in the seventh inning to make it 10-3. The Rams drove in two runs in the remaining two innings but the game had long been decided. The team notched two doubles, Cone’s home run, a stolen base by Trotta, and three Tribe pitchers kept the Rams in check to secure the win.

The second game featured more offense on both sides, with the Tribe scoring two runs in the first and third innings, appearing to be on its way to another smooth victory. But the Rams had other ideas in the fourth inning, scoring six runs on two singles and two doubles to take a 6-4 lead. The Tribe got one run back in the fifth inning on a fielder’s choice by junior outfielder Joe Delossantos to pull back within one.

Once again, a mid-game explosion from the Tribe bats followed, pouring in six runs in the sixth inning to retake the lead and control of the game. Thomas walked in a run, sophomore catcher Nate Goranson drove in four with a grand slam and a Delossant double brought in one more to make it 11-7 after the sixth inning. The Rams scored a run in the eighth, but the College countered in the bottom of the inning with four more runs to finish out the 15-8 final score.

Junior starting pitcher Casey Green struck out seven batters in the first three innings of the game and freshman utility player Nate Knowles earned the win, allowing only one run in his 2.2 innings of work. Junior pitcher Matt Howat forced four outs and earned the save.

Unlike the first two contests, the Tribe bats did not wait until the middle of the game to get its offense going in Game 3. It instead pounded in six runs in the first inning on a double from Cone, single from graduate student utility player David Hogarth and a double from Thomas. Both teams went scoreless for the second and third frames.

The Rams found their stride in the fourth, driving in five runs to close the gap to one and put some pressure back on the College. The game remained deadlocked until the eighth inning when Hogarth drove in two runs on a single and Thomas drove in another on a hard hit ball to left. An additional unearned run from Cone led to the eventual 10-5 score. The College’s bullpen came in clutch in the latter half of the game, with freshman pitcher Mike Weidinger giving up just one run in two innings and senior pitcher Rojo Prarie closing out the final three innings, earning the save in the process.

The team will next take the diamond Feb. 22 on a short road trip up I-64 to face familiar foe Richmond. The Spiders are 2-1 on the season and on a two-game winning streak. The game can be accessed on ESPN+.