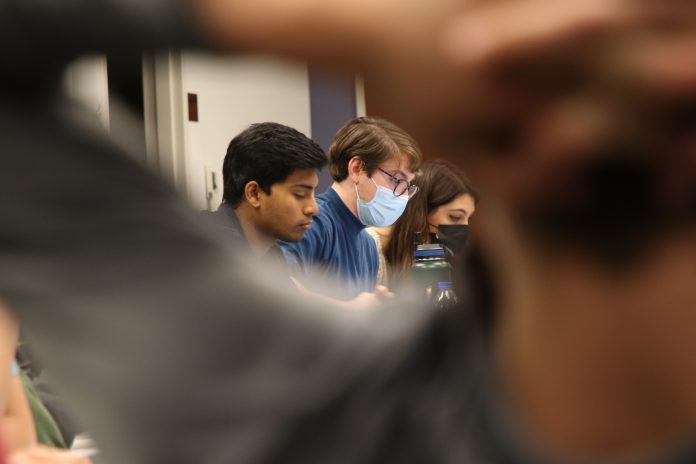 If an undergraduate representative reaches eight absences or a graduate Senator reaches twelve absences, articles of impeachment are automatically introduced against them. The meeting began with articles of impeachment introduced against Suddala on such attendance violation grounds. The vote, a paper ballot with a two-thirds majorityneeded to pass, decided if Suddala’s case would move on to a trial.

This is the second time articles of impeachment have been introduced on attendance grounds in the 329th session, in addition to multiple senators resigning just before reaching the attendance threshold.

Suddala provided explanations for each of his absences, which included studying for the MCAT, applying for medical school and writing his honors thesis.

“I was just taking some time off for my own mental health,” Suddala said about two specific absences. Further reasons Suddala cited included studying for a medical school interview and dealing with COVID and continued COVID symptoms.

Other senators defended Suddala, explaining his impact on them and on SA as a whole.

“I just want to say, outside of all this, [Suddala] has been leading the commencement committee for seniors…he genuinely puts so much work and so much love into Student Assembly, it would be a disservice to even try to impeach him,” Sen. Cody Armstrong ’22 said.

In a 19-3 vote, the impeachment failed to pass.

Sen. Matthew Hwang ’22 introduced the Asian Centennial Ball Act, sponsored by Hwang, Sen. Eugene Lee ’23, Sen. Hank Hermens ’22, Sen. Hashir Aqeel ’25, Sen. Regina Chaillo ​​’25 and Class President Yannie Chang ’25. The bill allocates $14,905 from SA reserves for the Asian Centennial Ball which will be held at the Sunken Garden on April 22 at 7:00 PM. The funding goes towards catering, a dance floor, and other amenities for the event.

“We’re basically holding a big ball for the entire school to replace the Royal Ball, and it will be a great way to celebrate 100 years of Asian-American representation at William & Mary,” Hwang said.

Sen. Maheen Saeed ’23 introduced the Addiction is Not a Crime Act, which allocates $8,000 from SA reserves to subsidize treatment at the New Leaf Clinic for W&M students.

Nguyen introduced the Holi Festival Bill, sponsored by himself and Aqeel. The bill allocates $1,300 from SA reserves to spend on food, water soakers, advertising posters and tables for the festival which will take place on Sunday, March 27, from 1:00 to 3:00 PM.

Finally, Sen. Vicky Morales ’22 introduced the Dairy Vehicular Act VI, sponsored by herself and Chair of the Senate Owen Williams ’23.

“This is something that Student Assembly has done in the past where on the Day for Admitted Students we…hire an ice cream truck to give out ice cream,” Morales said. “It’s a great way to interact with new students who you might meet in the following year.”

After the introduction, Nguyen posed a question about what kind of ice cream that will be offered.

“It’s usually a truck…a full-fledged truck with twenty different flavors, like you know the one that comes around your neighborhood?” Boojala said.

Class President Conor Sokolowsky ’23 had a question about the bill pertaining to its title.

“I don’t know, that makes more sense in my head,” Sokolowsky added.

The proposition was not considered.

SA unanimously passed the Movie Under the Stars Act, sponsored by Sen. Taylor Fox ’24, which allocates up to $4,500 from SA reserves to be spent on a movie to be played “on Sunken Gardens on a warm night during the Spring semester of 2022,” according to the act’s language.

Fox commented on what movie may be chosen for the event.

“Right now it’s looking like it’s going to be ‘Up’,” Fox said, receiving multiple gasps of excitement from other SA members.

“I love ‘Up’,” commented an unidentified member.

SA also passed the Three More Compost Bins On Campus Act, sponsored by Fox and Morales, which allocates $410 from SA reserves for its titular purpose.