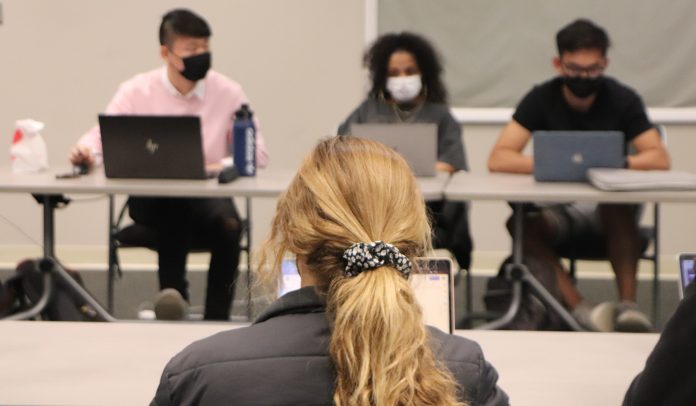 Sen. Maheen Saeed ’23 introduced the Funding Iftar Act, which allocates $9,000 from SA reserves to offer break fast meals during the month of Ramadan. The bill notes that dining halls on campus close at 8:00 PM whereas the Iftar times for Ramadan in 2022 are consistently after 7:30 PM, providing little time for students to make use of them for their break fast meal.

The bill allocates $4,100 from SA reserves to fund Extraordinary Cupcakes, t-shirts and decorations for the event.

Fox also introduced the Launderette Act, which allocates $610 from SA reserves to provide free hypoallergenic detergent pods to some laundry facilities on campus.

In addition, Fox introduced the Outdoor Furniture Act, which allocates $2,500 from SA reserves for lawn chairs in areas including “GGV, the field next to Sorority Court, the hill next to DuPont, and Yates field,” according to the bill’s language.

Sen. Regina Chaillo ’25 introduced the Matoaka Wellness ‘N Chill Act, sponsored by herself and Sen. Matthew Hwang ’25 and Class President Yannie Chang ’25. The bill funds an event which is tentatively scheduled for April 16 at the Martha Wren Briggs Amphitheater.

“I know, this session, we’ve been plagued with attendance, I feel like we’ve talked about it so much… but I wanted to make one of the last things I did to introduce some code changes to the attendance policy,” Armstrong said. “It’s kind of three fold; the first is to add…to the list of what is excused and unexcused [absences]…the second part is to make it an annual occurrence where the Secretary of the Senate must update this list …and the third part, which is the most controversial, is the removal of…the attendance threshold for impeachment.”

The threshold has been reached twice in the 329th session, first by Sen. Shaunna Scott ’23 and then by Class President Suhas Suddala ’22, with both resulting impeachment votes failing by significant majorities after Senators felt that the absences were justified.

Discussion of the bill centered around the reasoning for instituting the attendance thresholds two years ago and the changes since then.

“Life happens…things happen and people need to take time for themselves, but also, you need to come to Senate…COVID is moving into precedented times,” Sen. Jahnavi Prabhala ’22 said.

SA tabled the Addiction is Not A Crime Act, sponsored by Saeed, after ten minutes of debate. New information had come out since the bill’s introduction two weeks earlier which multiple senators thought called for a reconsideration of the bill, which provides subsidies for students who are referred to the New Leaf Clinic by Community Values and Restorative Practices (CVRP) for violations of alcohol policy or substance abuse.

“I’m worried that we, as a body, don’t know enough about CVRP sanctions and we’re relating that to all substance abuse issues,” SA President Meghana Boojala ’22 said. She also added that a recent email from Associate Dean of Students & Director of CVRP Dave Gilbert states that students who ask for financial aid for treatment receive it without issue.

“I know we’re trying to financially support students in need, but they already are getting this need,” Boojala added.

SA also unanimously passed the Holi Festival Bill, sponsored by Nguyen and Aqeel, which provides $1,300 from SA reserves for food and entertainment at the Hindu, Sikh, and Jain Students Association (HSJA)’s Holi Festival. The event will be on March 27 from 1:00 to 3:00 PM, and the public is invited to attend.

SA also passed the The “Self Care for Advocates” Bill, sponsored by Class President Mia Tilman ’24 and Sen. Gloriana Cubero Fernandez ’24, which allocates $217 from SA reserves to provide kits with tea bags, face masks, and candy for advocates to go along with the “Self-Care for Advocates” workshop, sponsored by the Haven and the campus organization Someone You Know.

Finally, SA unanimously passed the Dairy Vehicular Act VI, sponsored by Sen. Vicky Morales ’22 and Chair of the Senate Owen Williams ’23. This act allocates $2,000 from SA reserves to bring an ice cream truck to campus on the Day for Admitted Students.