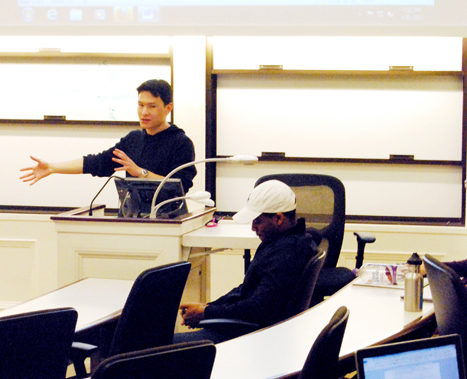 The passage of a solitary bill at the Student Assembly meeting Tuesday was met with a a room full of empty seats.

Chairman of the Senate Noah Kim ’13 spoke out against the tardiness and absences of many senators.

“Really, this is kind of getting ridiculous. I’ve never heard of a Student Assembly senate like this,” Kim said. “I don’t know what to do at this point to make people show up to the full senate meeting on time and have decorum. If for whatever reason you cannot make this commitment, I encourage you to step aside.”

Senator Ben Huber ’12 asked Kim why he was directing his entreaty toward those senators present and not those who have been absent for longer periods of time.

“My comments were directed toward the entire senate. I think we’ve had a problem with engagement since this session started,” Kim said. “I think only a couple senators have actually been sponsoring pieces of legislation.”

“If we need to talk about your participation in this body and whether it should be sustained, we should, after this meeting,” Kim said to the two senators.

The senate then introduced Executive Chief of Staff Gabriel Walker J.D. ’13. Walker will be representing the executive board in place of Vice President Molly Bulman ’12 during her absence due to a class conflict.

Next, the senate unanimously passed The Project VOICE Partnership Act. This act will allocate $1,500 from the Student Assembly Activities Fund in addition to approximately $5,500 already raised for I Am W&M Week, some of which was donated by other student organizations. These funds will aid in bringing TED Talks speaker Sarah Kay and the group Project Voice to campus.

“[During I Am W&M Week,] there will be a series of panelists and the mosaic concert at the end of the week,” Undersecretary of Multicultural Affairs Amalhyn Shek ’13 said.

Senators, including Zach Marcus ’12, asked about the HARK website that SA President Kaveh Sadeghian ’12 has been pursuing. Marcus pointed out similarities between the idea and CollegeCambio.com, a website two freshmen created this fall. Kim reported that Sadeghian is currently having trouble contacting the William and Mary Legal Department.

On Wednesday morning, Kim announced the resignation of Class of 2013 President Tess DeAtley ’13 due to her study abroad plans. Class of 2013 Vice President for Advocacy Morgan Dyson will assume the office of class of  2013 president.