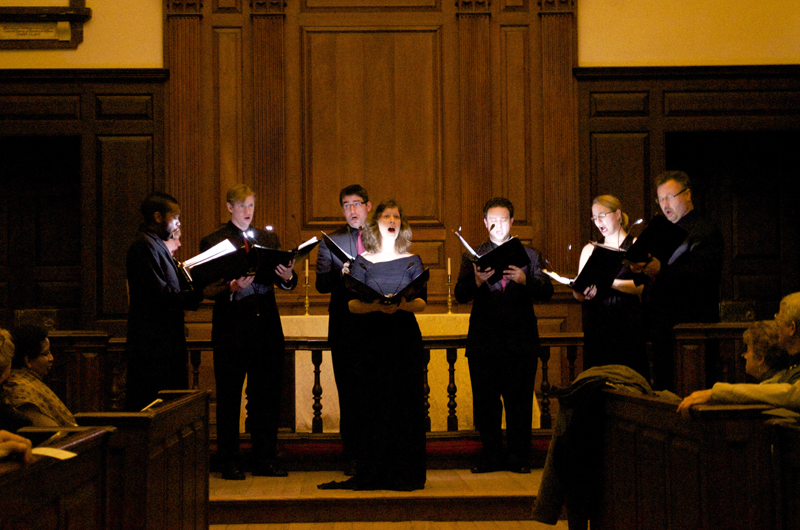 The lights dim and the audience hushes. A tense but anticipatory silence pervades the room until one man’s voice suddenly comes out from behind the balcony organ. More and more voices join until there is a full ensemble of disembodied voices filling the darkness. The song concludes, and the group moves solemnly into sight. Thus began the Feb. 8 performance by the Countertop Ensemble, the third installment in the Ewell Concert Series.

Yes, you read that name correctly: Countertop Ensemble. No, they won’t be leading a rousing song from atop your kitchen counters. Nor do they have anything to do with countertops. Actually, in true TWAMP fashion, the name was created as a play on words — the group originally contained two countertenors and two sopranos (the top voices). The group now includes four different voice types, singing a repertoire spanning five centuries, entirely a cappella.

Hearing the voices fill every inch of the space, I could hardly believe that only eight people were singing; the sound was so full and strong that it easily could have been a full choir. The quality of the group’s singing was nothing less than superb. The sense of control over its notes and lovely tonal quality encouraged many audience members to sit back with their eyes closed, just letting the music wash over them. The ensemble actually gave me chills with their clear and hauntingly beautiful harmonies. If at any point the singers made a mistake, I certainly didn’t hear it.

The ensemble’s performance seemed to be designed to enshroud the group with an air of intrigue and enigma. From ensemble member’s initially disembodied voices to the performers’ (mostly) solemn faces, the show was highly dramatic. This feeling was also perpetuated by the way the singers arranged themselves; they almost always stood in some variation on a circle, providing a sense of intimacy between the vocalists — a privacy in which the audience was lucky enough to be included.

The Countertop Ensemble titled their program “From Darkness to Light,” a name reflected in the visual elements of the show, which began with the lights dimmed, although the second part of the program saw the lights slowly raised until the final song “Loquebantur,” when the lighting filled the room.

Also adding to this dramatic effect was the event’s venue. The performance was held in the chapel of the Sir Christopher Wren Building, the perfect architectural counterpoint to the singer’s soaring voices.

At most vocal concerts — or at least the ones I’ve been to — the ensemble stands, and sings, and waits for applause; then the ensemble sings again and stands some more. There’s nothing wrong with that formula; it keeps things simple and focused on the music. The Countertop Ensemble, however, did things differently — namely, they moved.

Instead of their songs being broken up by applause the ensemble asked that the audience hold applause until the end. Each piece was followed by some movement through the space, accompanied by a vocal chant. By the end of the concert, the group had moved from behind the balcony organ, downstairs, directly in front of the audience, to the altar, and back up to the balcony again. At first the movement was confusing — there were a few perplexed glances being exchanged during the first few changes – but it added visual interest.

Lamentably, there were more than a few empty seats in the house — a shame for such a brilliant performance. The audience was comprised mostly of older members of the community rather than students. All the same, if the tumultuous applause and standing ovations that concluded the show were any indication, the Countertop Ensemble was loved by everyone lucky enough to have attended.