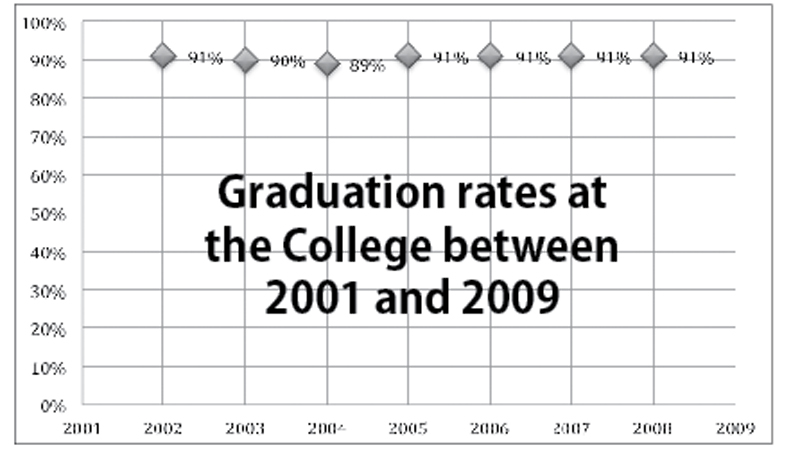 Over 560,000 students transferred from one institution to another in 2009, according to U.S. News, and with all indications that this number is on the rise, it seems transfer students account for a sizeable portion of graduates from institutions of higher learning.

The U.S. Department of Education agrees, announcing recently that transfers and part time students will now be part of graduation-rate tallies.

“More and more students are attending multiple institutions and are stopping out during their paths to graduation,” Associate Provost for Institutional Analysis and Effectiveness Susan Bosworth said in an email. “There has been increasing pressure by colleges and universities to develop a more accurate measure of graduation rates. Under the current system of reporting, transfer students do not count toward a successful graduation rate for any institution. They are counted against the initial institution, and then are no longer included in official graduation rates. Also, note, that [the National Collegiate Athletic Association] has a different way of calculating graduation rates for athletes.”

Like other major U.S. universities, the College of William and Mary, which welcomed about 230 transfers last fall and 70 at the beginning of the spring semester, will be affected by the new graduation tallies. College officials believe that although the change is important, it will not  drastically alter the College’s graduation rate, which currently stands at 82 percent.

The Department of Education’s new policy comes as a welcome change to several transfer students at the College who were not previously counted in graduation rates.

“I can’t say that I’m upset by it, but I figured that we would already be included,” transfer student Bucky Dow ’12 said. “Over the years, [transfers have been] a significant population, and I’m shocked that we weren’t already included.”

The one remaining point of contention concerns how the Department of Education will mandate data collection. Lingering questions include how many credits a student must earn to be considered part time as opposed to a transfer student.

The process of tracking one student to another could also become burdensome. A proposal that would create a nationwide database tracking every student individually has been criticized for violating privacy concerns. Several options include creating a state-based system in which students’ progress could be tracked within state institutions, but that would leave students who transferred between states uncounted.

Many believe that the new changes come as a result of the steadily increasing trend for students to transfer from one institution to another. Reasons for transferring vary. Boone and others at the College believe that the surge in transfer students can be linked to the tough economic times.

By all accounts, the College considers itself very transfer-friendly. According to statistics on the College’s website, the College averages about 970 transfer applications every fall and 250 every spring. Additionally, the College holds a close relationship with its junior college, Richard Bland College.

Boone, one of the College’s top liaisons to Richard Bland, and Dow, a 2009 graduate of Richard Bland, both see the benefits of making the transfer process as easy as possible and ensuring that those students who transfer from other institutions graduate from the College.

While the effect of including transfers in graduation rates remains to be seen, the mission for College administrators remains the same.

“At William and Mary, we are working really hard to make sure that our transfers have the resources they need once they get here to help them progress at a steady rate and help them get their degrees,” Boone said. “Hopefully one of the results from these mandates from the Department of Education is that we can figure out how to more effectively communicate and reach out to the transfers to help them get through in a timely fashion.”