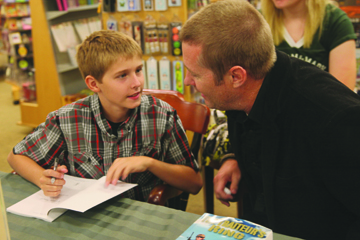 Do you remember reading in the kids’ section of the library? You could read about any adventure that your heart desired. You could be a pirate one moment and a talking animal the next. Now that you are older, that creativity might have dimmed, but there is always that longing in your heart for a good book that leaves you thinking, “what if?” “What if I actually had sat down and taken the time to write down those crazy adventurous thoughts?” For a College of William and Mary alumnus and his son, that “what if” became a reality.

Jeffrey Wilson ’88 has led a distinguished life as a Naval officer, firefighter, paramedic, trauma doctor, jet pilot and now as an author. He has written four books to date; two have already been published, one is awaiting release, and the other has yet to be contracted. He appeared at the College bookstore Saturday, Oct. 27 for a signing, joined by his son, who is also an author.

“I write really fast; it takes me about eight or nine months to write a book,” Jeffrey said. “There is not a lot of process to it; I just think of an idea. Sometimes I wake up from sleep and say, ‘what if?’ and that is how my books start: ‘Oh, what if this happened?’ And that is how it is with ‘The Donors’ — just one day I was like, ‘what if this happened?’ and I started writing a short story, and then I realized there [was] a lot more there.”

Jeffrey’s writing draws from his real life experiences as well as elements of horror and the supernatural. “The Donors,” his most recent release, is true to form — using his experiences as a physician, Jeffrey came up with the idea to set the book in a hospital, embellishing the story by adding macabre villains who attack the patients.

“I do not know if you have ever been sick and been in a hospital, but it is just so terrifying if you are not a medical person because there is so much unknown there,” Jeffrey said. “You do not know what is going on, so just being in a hospital is already scary, so adding a supernatural element into that unknown really takes it up a notch. Then in this book, I also made the main character a little kid, so then that adds another element.”

With a great deal of career experience under his belt, there is still one adventure that Jeffrey holds above all others: being a father. In the Wilson family, the apple does not fall far from the tree. Jeffrey’s oldest son Connor, now age 12, began writing after watching his father. At the age of eight, Connor released his first book, “A Giant Pencil,” joining his father in the limelight and becoming the youngest traditionally published author in the United States.

“Well, since we always had to use a pencil since I was in fourth grade, I just decided to write a book about a big one that could erase all of your problems,” Connor said.

Connor is shy, but that does not stop him from traveling all over the U.S. to do book signings alongside his dad. He has done radio, television and newspaper interviews ever since his book’s release.

At the signing, a quiet, young onlooker approached Connor at the urging of his mother. With a short exchange of words, the two nervous boys talked briefly while the child’s mother and Jeffrey attempted to pry a conversation out of them, hoping they would connect over their shared passion for writing.

The two boys took a few photos together before parting. However, young boys in bookstores are not Connor’s only admirers — his biggest fan is still his father.

“There is nothing like [seeing Connor become an author],” Jeffrey said. “Writers always talk about the first time when they open that box of books and see their own book, and that was cool. But it was nothing like seeing Connor’s book … the first time I read his story in pencil in a notebook, it was amazing. I knew he [was] creative because he has always written stories and thought of stories, but that he could put together a whole book was pretty amazing. So yeah, we are just so proud of him. It is hard to think about my books anymore because we are all thinking about him.”

When Connor is not busy traveling with his father for book signings, he enjoys skateboarding and playing basketball and video games. He is currently working on a books series, which is scheduled for release in March.

“[The book series] is about starting middle school,” Connor said.

Connor aspires to be an author like his father when he grows up. When asked, both father and son advised those seeking a career in writing to never give up.

“I would say that is the best advice because writing is a really, really hard career to start and then once you have a little momentum, it can be a lot of fun, but I think there are a lot of talented writers that just get so discouraged because you have to have thick skin,” Jeffrey said. “It is difficult getting all those rejection letters from all those people you don’t know, and a lot of people I think take that personally. They say, ‘Oh, well. I guess I am no good,’ and then they give up. We are both very lucky. I mean, he is 12 years old and wrote one book, and it has become a huge sensation. I am very lucky in that I have got four books out, and I have sold three of the four that I have finished. So, that is not the typical story, so we are really, really lucky. People just need to hang in there, and they will get there eventually.”