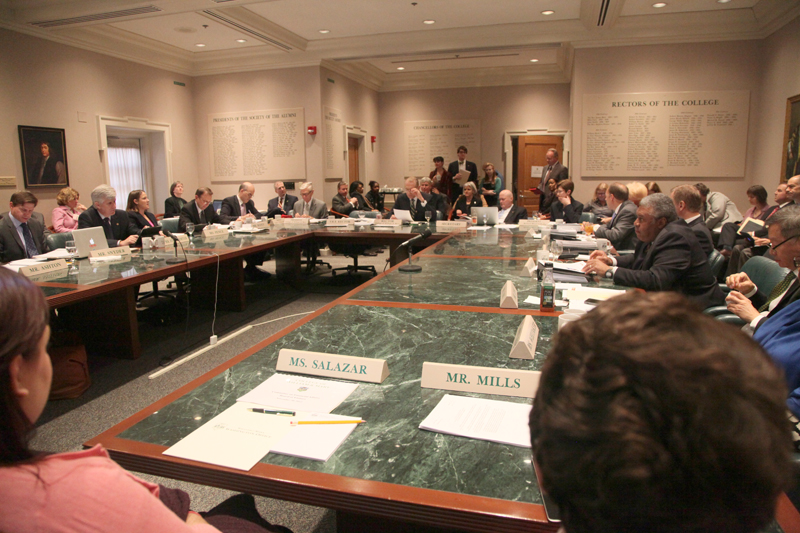 The Board of Visitors discussed Richard Bland College and property expansion at its full board meeting Nov. 30.

College of William and Mary President Taylor Reveley declined to make any initial remarks during the crowded open session, which started late.

“The Chair of Academic Affairs has an airplane to catch,” Reveley said in his explanation.

The BOV approved revisions to the faculty senate of Richard Bland College’s new integrated shared government system. Liberson noted that Debbie Sydow will be inaugurated as the school’s new president April 26, 2013. Liberson encouraged Board members to attend the ceremony.

“We’ll make it a real coming-out party for the future of Richard Bland,” Liberson said.

Rector Jeffrey Trammell ’73 outlined the College’s intent to purchase buildings at 427 Scotland Street and 406 Jamestown Road before 2013. The Scotland Road structure will serve as the College’s new AidData Center for Development Policy. The Board projected $1.5 million in transaction costs.

The Board summarized the upcoming interagency transfer agreement with Eastern State Mental Hospital. The College currently owns an acre of land on the edge of Longhill Connector Road, which has been maintained by the hospital for years.

“The land doesn’t do the College of William and Mary any good,” Trammell said. “[The hospital] has already been caring for it for some time.”

Vice Rector Charles A. Banks III reviewed the status of the landfill located behind the Marshall Wythe School of Law, which has remained unused without incident for twenty years. The Board approved a motion to close the landfill and note its presence in the property’s deed, as required by the state.