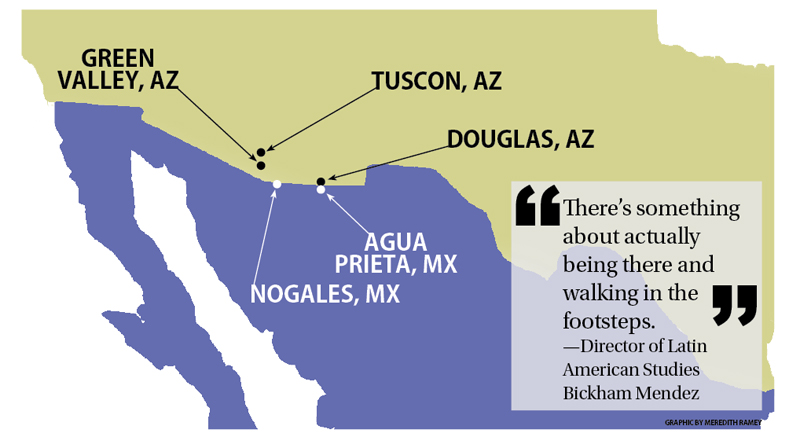 As the U.S. Congress and the White House shift their attention to immigration reform, students at the College of William and Mary are preparing to make their own contribution to the national debate.

Director of Latin American Studies Jennifer Bickham Mendez and Visiting Assistant Professor of Philosophy Robert Sanchez led nine students on a trip to the U.S.-Mexico border from Jan. 6 to Jan. 13. During their week long visit, the group met with migrants, activists, a public defender, U.S. Border Patrol agents and Immigration and Customs Enforcement (ICE) agents in order to learn and witness first hand what is happening along the U.S.-Mexico border.

“One of the reasons [we went on the trip] is to figure out what the immigration issue really is, what we can do in our limited capacity as teachers and students, and to figure out or to get a sense of what it is like on the ground,” Sanchez said.

Before departing on the trip, students read material to familiarize themselves with border issues.  The students, who are currently enrolled in classes related to border issues, are preparing to host a day long symposium in Washington D.C., Apr. 19 to continue spreading understanding of border related issues. The symposium will consist of three panels with one student from the trip serving on each panel. The students are considering which policy makers, activists and other professionals involved in immigration related issues they should invite to sit on the panels.

On its trip, the group participated in activities facilitated by Borderlinks, a bi-national, nonprofit educational organization. Activities included a demonstration about the cost of living in border cities like Nogales, Sonora, desert walk on a trail used by migrants and a federal district court proceeding of Operation Streamline, an expedited judicial process that targets undocumented entrants apprehended along the U.S.-Mexico border.

“We saw a lot of hard stuff but [Operation Streamline] was kind of the hardest,” Louis Elkner-Alfaro ’14 said. “It was a bunch of [migrants] who had crossed not that long ago. They were still in tattered clothes and disheveled and chained because they were put in jail. It was about 70 of them in the court room. In groups of 10 they’d bring them up, and everyone had to say that they were guilty because it makes more sense, as far as trying to get back to Mexico, to say you’re guilty rather than innocent because if you say innocent and try to petition your case you’ll spend more time waiting [in jail] for your court hearing.”

In Tucson, Arizona, Operation Streamline convicts up to 70 migrants per day. The apprehended migrants are charged with a misdemeanor for illegal entry.  Migrants who are found guilty face stricter and longer penalties if they are caught attempting to cross again.

On the U.S. side, the students spent time in the Arizona towns including Tucson, Douglas — a border town — and Green Valley, a town located in the desert where migrants often attempt to cross the border.  On the Mexican side of the border, the group visited Sonora in the border cities of Nogales and Agua Prieta.

“Education through immersion and faculty-mentored research are valuable and in alignment with the university’s mission,” Bickham Mendez said. “There’s something about actually being there and walking in the footsteps, which we quite literally do by walking in the desert. It seems like in … today’s era of communication technology that we should just be able to read about these things, but there is something about sitting down for a week over and over again with all these different people … from landowners who just happened to have the human remains of three individuals found on their property, to the Samaritans who leave water in the desert, to defense attorneys who work in the federal court in Tucson, to Border Patrol whose headquarters we visited this time in Douglas, to ICE agents … who all give testimony to what their experience has been in a daily way.”