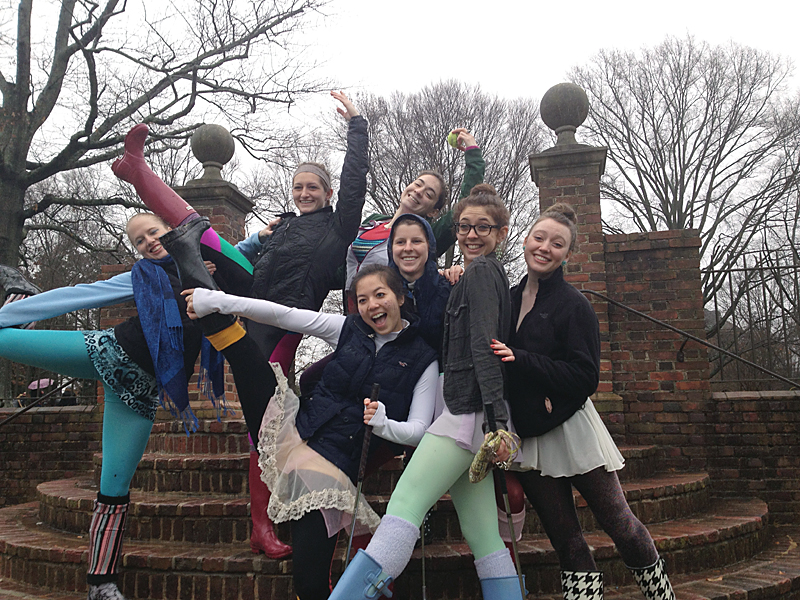 The conditions were far from ideal, but then again, so were the golfers.

Braving the cold drizzle that descended upon the makeshift golf course on the Sunken Garden, members of The Flat Hat Campus Golf team competed lackadaisically against each other in one of the most embarrassing displays of athletics in school history.

This year’s Campus Golf marked the first time that members of the Sports section and members of the News section played together on the same team — with predictable results. The idea of using scorecards to tally each player’s number of shots was thrown out amid the mud and merrymaking, which made it impossible to decide a victor.  The only certain outcome of the match, besides a sense of collective shame, was that the Sports section trounced the News section.

Saturday’s match doubled as a coming-out party for the next generation of Campus Golf greats. With the storied paragons of the sport, Jared Foretek ’14 and Mike Barnes ’13, both unable to play, Chris Weber ’15 and Jack Powers ’15 represented the Sports section and consistently outperformed their opponents throughout the long course. While most of the News section players didn’t show much enthusiasm for the match and, in truth, seemed generally confused about the concept of sports, Weber and Powers smelled blood in the water.

After the match, Weber spoke frankly about his intentions for future dominance.

“Having Mike and Jared there helps a lot; veterans have a lot to share,” Weber said. “Of course, I want to exceed them — that’s what every rookie dreams of. Today was a step in that direction.”

While most of the News team was paralyzed by horrid memories of high school gym class, there were a few standout performers who were able to give the Sports section a run for its money. Jill Found ’13, smartly bedecked in rolls of toilet paper, wanted to go out on top in what was surely the final round of her storied Campus Golf career. Benming Zhang ’16 played an admirable round of golf — as was befitting of a man wearing salmon-pink pants and a blue blazer.

However, Weber and Powers were able to extend their leads each round.

“I didn’t let the lead get to my head,” Weber said. “When you’re out there competing, it doesn’t matter how big of a lead you have — you gotta keep competing, especially with the field that was out there. Zach Hardy [’13] was strong out there, along with Benming Zhang. Jill Found — she was out there.”

The infamous final hole outside McLoughlin-Street Hall is a challenge for even the most confident of golfers. A misguided shot here could spell doom.

“Coming into that last fairway, I knew I had to get it on the bricks,” Weber said. “Anywhere else and you’re spraying mulch. First shot was alright, but then it took a funny hop and ended up in the bushes. Asked for a hazard, but those KD’s were having none of it. So I had to take the chip from the bushes.”