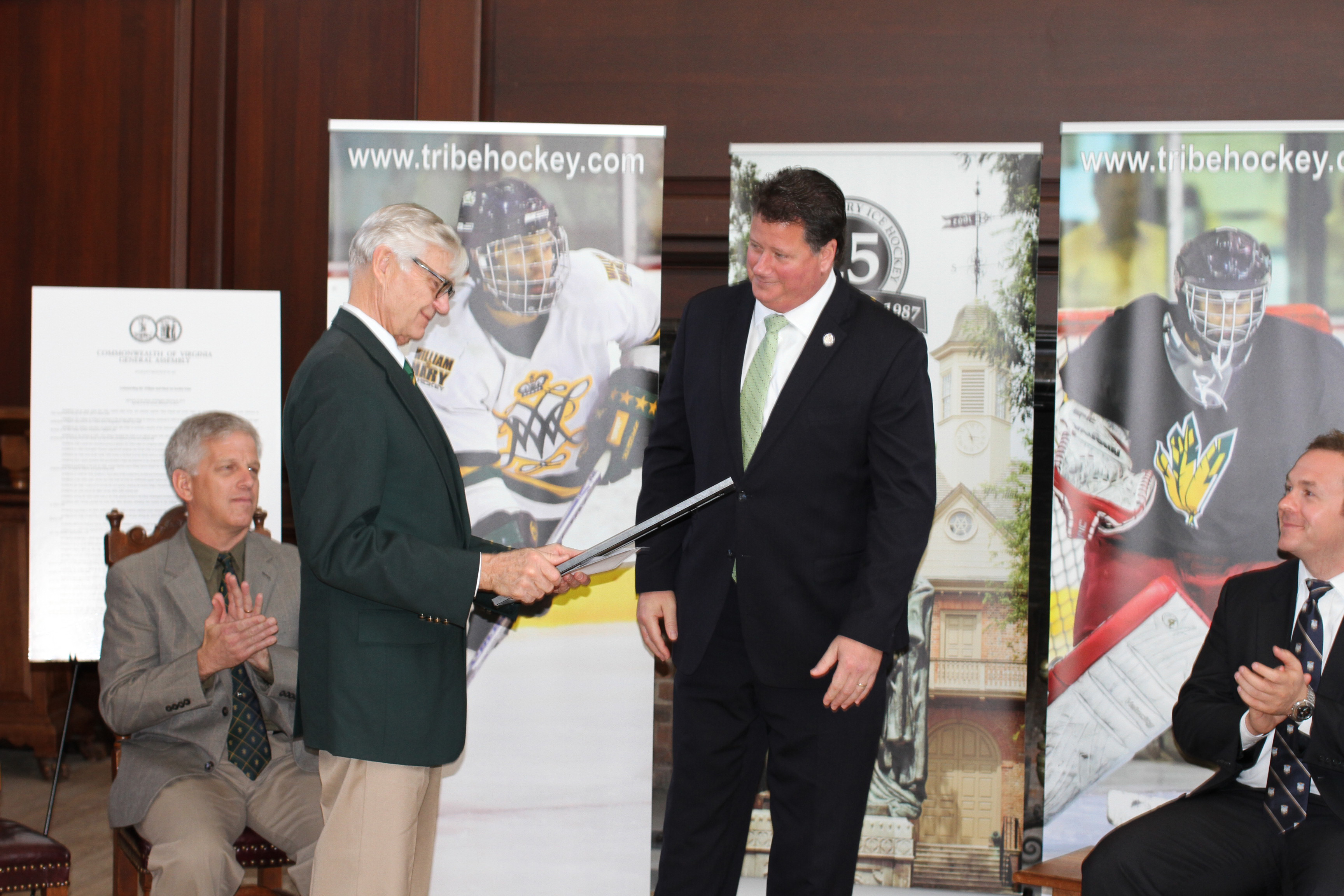 The William and Mary club hockey team celebrated its 25th anniversary Saturday in the Great Hall of the Sir Christopher Wren Building, with a ceremony that featured past and present players as well as Delegate Mike Watson and College President Taylor Reveley. The ceremony commemorated not just the club’s milestone achievement but also the loss of former coach Phil Morris and player Jason Cassels last semester.

Given the kind of constraints it deals with on a season-to-season and game-to-game basis, it is admirable what the team has accomplished. In many ways, it’s a wonder the club has even survived for a quarter-century. The current players at the ceremony were barely able to fill four small benches, which came as no surprise to anyone who has watched one of the team’s games and has seen that it can barely fill out the ice. Some teams fill the rafters with fans, while some teams just try to fill out the roster with players.

Also, like all sports clubs on campus, the Tribe hockey team must contend with a severe lack of funds. The school provides very little of its financial needs, while the majority comes from tax-deductible donations from families, friends and fans. For a club that travels all around the state from September through February, scratching and surviving is no small feat. Some of the club’s alumni have banded together recently to create the “Royal Blueliner Society,” which helps fund the team.

But, make no mistake, this club doesn’t want your pity. They’ve become so good at being the underdog they’re starting to become a favorite. This year the team had one of its best seasons, which included satisfying wins over rivals Old Dominion and Catholic, a school they had never beaten through all the previous 24 years.

It’s a shame two men who meant so much to the program couldn’t see the ceremony, but each player’s expression during senior captain Matt Levey’s speech bore evidence they would not be forgotten. Morris was the team’s coach from 1999 to 2007 and left a large imprint on the shape of the club. Cassels, a 2011 graduate of the College, was a revered competitor who inspired his teammates.

Reveley, one of the club’s biggest cheerleaders, wrapped up the ceremony with a typically wry speech about how impressed he has been with the spirit of the team over the years. His message was that the team’s persistence and passion for the sport are enough to overcome its severe lack of financial resources. Though, a big donation would be nice.

Ultimately, stripped of funding and isolated in a dingy ice-rink 30 miles off-campus, the College’s club hockey team is proof that students will always find a way to do what they love.

The Pressbox Blog: Inside the numbers as baseball hits the home stretch