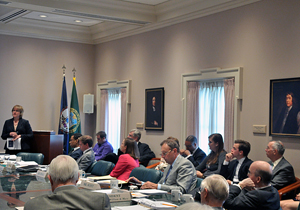 Last week, the College of William and Mary announced the $23.9 million donation from the estate of Walter Zable ’37, LL.D. ’78. Yesterday, in the midst of proposals to renovate Zable Stadium, the Board of Visitors Committee on Athletics convened to outline future use of the gift as well as to confirm the College’s continued membership in the shrinking Colonial Athletic Association.

“A few years ago Walter [Zable] — who had a great sense of humor — told me that we would be very happy when he died, but we did not expect such a large donation,” Athletic Director Terry Driscoll said.

$10 million of the gift will go toward improvements to the current football stadium, whose name already commemorates the donor. Driscoll said the money allotted for the stadium would cover improvements and necessary additions to the facility.

“The first order of business is to conduct a feasibility study to see what needs fixing,” Driscoll said. “Certain amenities, such as bathrooms and more handrails, must be built.”

Driscoll explained that after the most necessary items are fixed, the College will consider creating a new press box, suites and additional seating.

“These are all dependent on private funds, and there are certainly no shovels in the ground yet,” Driscoll said. “We must take care of the necessities first.”

Another $10 million from the Zable gift will go toward athletic scholarships, with the remaining $3.9 million   unallocated for the time being.

Later in the meeting, tennis coach Peter Daub spoke before the board. Daub, who surpassed the 500-win milestone March 30 with a sweep over James Madison University, has coached at the College for 17 years, compiling three CAA Coach of the Year awards. Daub asked for more efficiency in communication between the athletic department and administrators in admissions and financial aid issues.

“In order to bring in the best and the brightest, I need to give financial decisions immediately,” Daub said. “More definitive and timely responses are needed from admissions.”

Daub has found success with student-athletes at the College, coaching 65 students to All-CAA honors. In 2010, a Daub-coached squad had a school-record three ITA Scholar-Athlete Award recipients.

The committee also discussed the status of the CAA, which has seen several members leave in part of a nation-wide trend to align with large conferences.

“The CAA is hoping to add three schools, to bring the total to twelve,” Driscoll said.

Driscoll explained that all current members of the CAA have verbally agreed to stay; although, there has been speculation that JMU will link with Conference USA in the future.

“They have not been offered to join Conference USA, and their board does not yet understand the financial implications of joining,” Driscoll said.

With the departure of the University of Richmond, Virginia Commonwealth University and, most recently, Old Dominion University, the College and JMU remain as the only Virginia-based schools in the CAA.