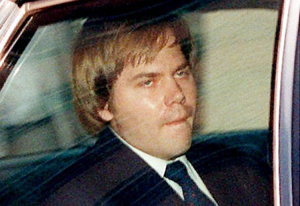 He visited the Muscarelle Museum of Art at the College of William and Mary. He’s gone to the Williamsburg Target, Harris Teeter and Barnes and Noble. Wherever he goes, U.S. Secret Service agents have watched him, monitoring his movements and interactions. But why is this man being observed during these errands? Because in 1981, John Hinckley, Jr. attempted to assassinate President Ronald Reagan.

Hinckley has had visitation rights to visit his mother in Williamsburg since 2006. He was found not guilty by reason of insanity for the attack in which he shot three other men and permanently paralyzed Press Secretary James Brady. Hinckley stated the reason for the attempted assassination was to impress actress Jodi Foster. He has been living at St. Elizabeth’s Hospital in Washington, D.C. since 1982.

The Associated Press reported that Hinckley got in trouble after a 2011 visit to a local Barnes and Noble. An agent reported that he was looking at books about the assassinations of former U.S. Presidents William McKinley and John F. Kennedy. He has also landed in trouble for lying about seeing two movies. Other than these incidents, the Secret Service stated that his behavior on his excursions has been acceptable.

The Associated Press reported that Hinckley visited the Muscarelle. After multiple attempts to contact the museum, the Muscarelle could not be reached for comment by press time.

The Los Angeles Times reported that after the success of Hinckley’s visits, beginning in 2006, Hinckley was to be awarded 12 ten-day visits to the area in 2010.

Some students are not happy that Hinckley is spending time in the Williamsburg area.

“I feel really uncomfortable with that,” Elizabeth Gomez ’16 said. “Being a student on this campus, knowing that he shot someone, it’s an unsettling feeling.”

Others do not mind his presence. Brody Marino ’16 says that Hinckley visiting the area does not make him feel in danger.

“It doesn’t bother me in the slightest,” Marino said. “It doesn’t make me feel any less safe on campus.”

U.S. District Court Judge Paul Friedman will decide whether Hinckley can continue visiting the area. The ruling could be made any time. The Williamsburg Yorktown Daily reported that the staff at St. Elizabeth’s has recommended he be released to his mother’s care full-time after two 17-day visits and six 24-day visits in which he exhibits appropriate behavior. 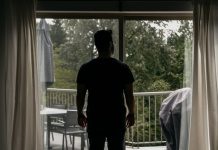 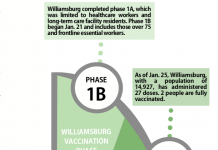