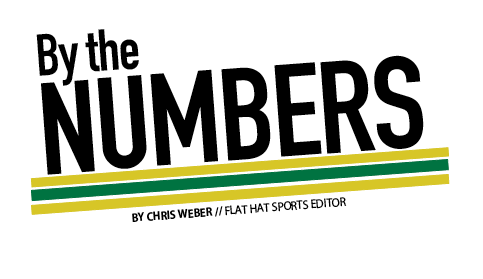 Chances students have to see the College’s volleyball program in action this season. Sophomore Dessi Koleva leads the squad, which finished 13-14 (5-7 CAA) a year ago. One of just two sophomores named to the pre-season All-CAA team, Koleva was 2012’s CAA Rookie of the Year after averaging 2.24 kills and 2.61 points per set. Look for more of the same.

Senior Drake Kuhn’s jersey number. Kuhn spent his first four years at the College with the football program, playing as both the punter and kicker. Entering his fifth year, Kuhn walked onto head coach Chuck Norris’s soccer squad as a goalkeeper, playing the second half in the College’s 2-1 exhibition win over No. 24 Virginia Commonwealth.

Number of years head coach Jimmye Laycock has guided the football program. Also the number of years since the offensive playbook changed. All kidding aside, look for a much improved offense from a season ago. After finishing 2-9 (1-7 CAA), Laycock and Athletic Director Terry Driscoll hired Kevin Rogers as offensive coordinator in March. Rogers comes to the Tribe after stints coaching Division I football and five years in the National Football League as a quarterbacks coach with the Minnesota Vikings, including the 2009 playoff run. While the offense should improve, Rogers still needs to find a starting quarterback.

Years of experience for Director of Golf Jay Albaugh. Despite leading the program to a number of individual titles and records, Albaugh has yet to capture the CAA title.

Margin of victory for the men’s cross country program CAA title a season ago. Placing five runners in the top 10, the Tribe continued to prove its dominance in distance running. Look for the College to contend once again this year.