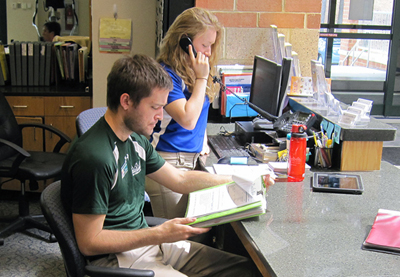 When walking into the College of William and Mary’s Student Recreation Center, one might notice some changes. The swipe-in machines no longer accept key codes or finger prints. The Rec staff is stopping some students before they enter, and a few of the swipe-in machines have pink “out-of-order” signs.

Currently, the Rec is undergoing a system update as well as a policy change that Director of Campus Recreation Linda Knight believes will benefit the facility as a whole.

Improvements that Knight predicts the Rec Center will make include an online sign-up system for fitness classes and intramural sports. Also, with increased funds, the Rec is looking to purchase new fitness machines.

“Any money that we get in from this [the new fees] will go back into the facility to benefit the students,” Knight said.

The new software capabilities also include tracking who uses the facility and the times, so the Rec can offer more fitness classes during hours that cater to the needs of the individuals using the facility.

“I am just learning on the fly, but I can tell that it is streamlining the process a lot more; all we have to do is figure out the kinks,” MacQueen said.

With the new system, some students have had difficulty with their IDs.

“Alumni that just graduated have started to realize that they can no longer use the facility under their old ID. Also, we have had some issues with VIMS students and some international students studying abroad,” Rec Center employee Mary Covington ’14 said.

Through all the initial kinks, the Rec Center is looking to benefit all those who enter the facility.

“We really want to meet the needs of our students, and we can really do that with this new system,” Knight said.